Inevitably I got to thinking a lot about David Bowie this week and like many of us, have ended up spending a fair bit of time online looking back at his many guises. One that has thrown me a bit is the early ’80s “Let’s Dance” phase. Early ’70s David Bowie hid behind bizarre “spaceman” characters but by 1983 he had gone seriously mainstream – Or was he playing another character? I heard him say in an interview that he felt far more confident on stage playing a character such as Ziggy but by 36, as he would have been by this time, it looks as if he was confident enough to be himself. Amazingly, after looking pale, thin, malnourished and let’s be honest, a tad weird a decade earlier, he had turned into one of the best-looking guys in the industry (we’ll ignore the teeth). This was the post-New Romantic period and he was very much adopting the sharp, elegant look that bands such as Duran Duran, ABC and Japan favoured. 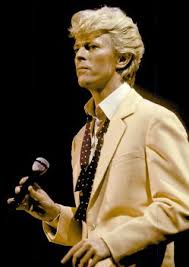 I am still unsure who copied who, but in 1983 there were a series of events that seemed to tie in and feed off each other. He released the “Let’s Dance” album that year and a string of hits came from it starting off with the title track in March. He had approached Nile Rodgers to act as producer on it, and his brief was to “give him hit singles“, which is exactly what he did. A massive world tour followed and I remember my flatmate of the time heading downtown with her sleeping bag in order to queue all night for tickets (no computers or Ticketmaster in those days, we were old school).

We knew that Bowie had a film coming out later that summer, Merry Christmas, Mr. Lawrence, and leading the advance party were David Sylvian (ex of the band Japan) and Ryuichi Sakamoto (also an actor in the film), who had produced the soundtrack album. The beautiful song Forbidden Colours was released in July 1983 and looking at a picture of David Sylvian now, there is more than a passing resemblance to Bowie at that time although not as suntanned (as he hadn’t been on location in a tropical rainforest).

The lyrics again are a bit bizarre but the theme is a forbidden love, which is also reflected in the storyline of the film. I do remember going to see it when it came out the following month and Bowie turned in a really good performance. A male colleague from that era had also been to see it and when I asked his opinion he decided that there had been something lacking, in that there were no women in it. That would of course have been because it was set in a male prisoner of war camp!

So, unlike with his earlier creations, David Bowie in 1983 was very much part of the zeitgeist making highly commercial pop music and looking and dressing very much like his younger counterparts. He was back acting, and feeding off the people he worked with. Happy memories of those days – The real start of big ’80s hair (perms and bleaching were de rigueur), bold bright earrings, tanned skin, and lots of white shoes and clothing. Those of us who got on board with the whole look have probably ruined our hair and skin in the process but boy did we feel good when stepping out for a “night on the town”. 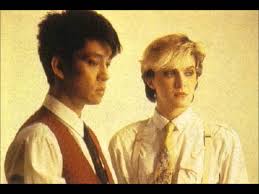 The wounds on your hands never seem to heal
I thought all I needed was to believe
Here am I, a lifetime away from you
The blood of Christ, or the beat of my heart
My love wears forbidden colours
My life believes

Senseless years thunder by
Millions are willing to give their lives for you
Does nothing live on?

Learning to cope with feelings aroused in me
My hands in the soil, buried inside of myself
My love wears forbidden colours
My life believes in you once again

I`ll go walking in circles
While doubting the very ground beneath me
Trying to show unquestioning faith in everything
Here am I, a lifetime away from you
The blood of Christ, or a change of heart