Last time I pressed the publish button on this blog I got one of these from the WordPress people. It only took me 10 months to write my first 100 posts, but it’s taken another 17 months to ma 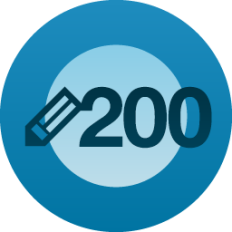 ke it to the 200 mark. I couldn’t really have kept up that pace long-term though and anyone who has followed this blog for a while now will know that there have been a few bumps on the road around here of late, but I plan to keep going, as I still love putting together these offerings that tenuously link to the Tracks of My Years. Also, the little blogging community I seem to have found myself part of has become really important to me, and if I’m not mistaken, it looks as if there might even be a real life meet-up down the line. Wouldn’t have expected that 27 months ago, no siree Bob.

But what to write about this time, for boring old Post 201 (I do hate veering away from a nice round number) – I remember suffering from blogger’s block when I reached Post 101, but then as if by magic, all sorts of ideas sprang forth. The number 101 led to thoughts of George Orwell’s Room 101 which in turn led to featured song choices. The binary number 101 converts to 5 in decimal, and no end of bands that incorporate that number into their name. Also, I decided that 101 is a palindromic number, which again inspired a song choice or two.

Much, much trickier, so time to resort to the vast resources of the world wide web. First up is this interesting snippet – It turns out that the North American Area Code for Hackensack, New Jersey, is the number 201. This is not the first time Hackensack has been mentioned in this blog, as one of the New Jersey suggestions for my American

Odyssey series was the song Movin’ Out (Anthony’s Song) by the Piano Man himself Billy Joel. There is much wordplay and a distinctive use of rhyme in this song, and that particular place, Hackensack, fitted the lyrics perfectly as Billy was also singing about heart attack ack ack ack acks and Cadillac ac ac ac acs. Personally I wouldn’t be that keen on living in a place with such an ugly sounding name (apologies to the residents of course), but as ever, it started life as something totally different. The Native American tribes who first inhabited the area called it Achinigeu-hach, or Ackingsah-sack, meaning stony ground, but along the way it became the more anglicised Hackensack.

For the record, my favourite place names in the UK are Westward Ho! (don’t forget that exclamation mark), Mousehole in Cornwall (just so cute) and Ashby-de-la-Zouche (all very post-Norman Conquest). It can’t be denied however, that there are some pretty unattractive place names here in Scotland, and up there with the best of them would be Auchtermuchty in Fife – I will give it a pass however as that is where those bespectacled singing twins The Proclaimers hail from, and without them and their songs this blog would have a much reduced number of visitors per month, so thanks guys for writing that love letter to Leith and for the Sunshine that falls upon it. 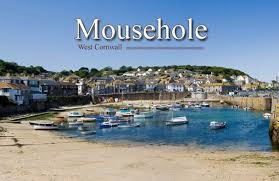 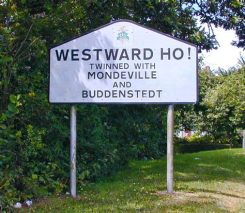 But back to the song, and in case anyone has absolutely no idea what I have been wittering on about above, here is an extract from the lyrics that make sense of it all:

Who needs a house out in Hackensack?
Is that what you get with your money?
It seems such a waste of time
If that’s what it’s all about
If that’s movin’ up then I’m movin’ out

Movin’ Out (Anthony’s Song) was one of the singles released from his 1977 album “The Stranger”, which is generally considered to be his magnum opus. For me it was one of the soundtracks of my student years, as yet again it was an album owned by the boyfriend-of-the-time’s older brother (who was also incidentally responsible for making me fall in love with the music of Leonard Cohen, Joni Mitchell and Carole King, but that’s been covered here before).

Billy felt very strongly it seems, about the prevailing blue-collar immigrant work ethos, whereby it was important to work long hours at sometimes back-breaking work just to acquire the trappings that proved you had “made it in America” – The house out in the suburbs and the Cadillac on the drive. He made his character Anthony question it all, as he felt too many people were wasting their lives and talents because they felt pressured into taking a job to take care of the family.

Well, has anything changed in the intervening 40 years I wonder? Too many of us still seem to be pressured into taking jobs that waste our talents, because at the end of the day there are bills to be paid and mouths to feed. In fact I would even suggest that nowadays the vast majority aren’t even doing these kind of jobs to upgrade to a fancier car or a luxury house in the suburbs, but merely to keep afloat. But hey, let’s not end this post on doom and gloom, as the upside is that artificially intelligent robots will take over most of the jobs in the next few decades anyway, so a universal wage and life of leisure awaits us all. Or will it? Time will tell.

As ever, I’d love to hear from you and I always reply.

Anthony works in the grocery store
Savin’ his pennies for some day
Mama Leone left a note on the door
She said
“Sonny, move out to the country”

Oh but workin’ too hard can give you a heart attack
You oughta know by now
Who needs a house out in Hackensack?
Is that all you get for your money?

You should never argue with a crazy mind
You oughta know by now
You can pay Uncle Sam with the overtime
Is that all you get for your money?

It was inevitable that I would revisit other songs on “The Stranger” whilst writing this post and what a joy it’s been listening to this work of genius again. Scenes from an Italian Restaurant is effectively a mini opera with three distinct “acts” rolled into one. It begins with a gentle piano ballad, and sets the scene for two old classmates meeting up in an Italian restaurant. The next section is jazz-influenced and up-tempo, featuring a clarinet, trombone, tuba and saxophone solo. Here the two update each other on how their lives have turned out. It ends with a rock ‘n’ roll section telling the story of Brenda and Eddie, a couple of popular “jocks” from their schooldays whose life kind of peaked too early – We all know a Brenda and Eddie and even if we don’t come from Long Island like Billy Joel, most of us of a certain age can probably identify with this song. It was never released as a single but it’s still my favourite track on the album. Enjoy.

Scenes from an Italian Restaurant by Billy Joel: