A few weeks ago, I threw down the gauntlet and asked followers to come up with ideas for future posts. Whenever I’ve done this in the past it’s been quite easy to come up with something reasonably entertaining, as a fairly mainstream song has been suggested. This time…., not quite so easy. This third reply post was always going to be tricky, as I hadn’t actually heard of the artist or song when it was first suggested by Mr Medd, whose Are We There Yet? blog is one I visit often. My proviso for this challenge was that I had to have heard of the artist, so by rights I could have wriggled out of it, but that would be a bit lame so here goes:

Woozy With Cider by James Yorkston:

Woozy With Cider was recorded by singer/songwriter James Yorkston in 2007. It’s a spoken word kind of affair and apparently falls into the electronic/folk rock camp. As I said above, both James and his “song” were new to me, so before hitting the keyboard I was going to have to do a bit of serious listening. Lots of imagery in this song but what comes across loud and clear is that Mr Yorkston is neither a fan of big cities nor city folk and their sometimes patronising attitude towards those of a more countrified nature. He kind of yearns to be back in the place he feels most comfortable, “a village the size of a teacup”. There has been a wedding though (oh no, another wedding post – I can’t get away from them), which is the reason for the trip to the big smoke, but it is now the day after where there is time for reflection, relaxation and just enough cider to cause a bit of “wooziness”.

I really liked this spoken word song right from the off, and I think I worked out why pretty early on. Once I’d done a bit of research into James Yorkston, I discovered he came from the Kingdom of Fife in Scotland, which is a peninsula situated between the Firth of Tay and Firth of Forth (and home to the ancient Pictish kings). He became part of something called the Fence Collective set up by Kenny Anderson (aka King Creosote) where a group of Fife-based musicians got together and released music on their own record label with little more than a CD burner and the use of a local bar’s unused “back room”.

Looking at a map of Fife it looks remarkably like the Black Isle peninsula where I reside. From experience, these are beautiful places to live – Great scenery (water on three sides), picturesque villages, clean air and not too many people or cars. Like James, I would find life in a big city nowadays nigh impossible and find the best mix for me is kind of what is implied in the first line of the lyrics, “I hear you softly sleep amongst the cars and saluting songbirds”. It is now evening and the sound of the traffic has died down so the birds can be heard in equal measure. That’s my ideal – To be near enough civilisation to hear the sound of cars in the distance, but also to be able to hear the sound of birds (as I type I am listening to a hooting owl). It’s not for me the cacophony of city life with only the odd squawking seagull – I know where I’m supposed to “be” and like James Yorkston, I very fortuitously found it when I was relatively young, in my late twenties.

So, I only found out about James Yorkston when the suggestion for this post came in but since then I have been bombarded by references to Fife and Fence Records. There is a name for this phenomenon (more than just coincidence) which currently eludes me, but we all experience it from time to time – In our house, whenever it happens it’s always accompanied by a quick burst of the Twilight Zone music.

First of all, as per my previous post, we ended up having a spontaneous wee break last week in the city of Dundee, which is just on the other side of the Tay Bridge from Fife. It was a no brainer therefore that we would head across for a visit. By this time I knew all about the Fence Collective based in the East Neuk of Fife, so what better place to visit in order to get “woozy with cider”? 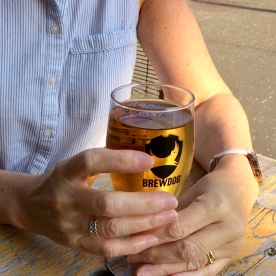 Me getting woozy on cider!

Secondly, a couple of night’s ago I caught the final episode of the BBC2 documentary series Rip It Up which was ostensibly about how Scots have had to overcome obstacles, and blaze a trail, in order to make the music they love. This episode featured those independent labels such as Fence Records who decided to follow a different path and not head to London, but to remain in Scotland and be inspired by their surroundings – They would make music primarily for the love of it and not just to make lots of money. We even had a lengthy interview with Mr Yorkston (whom I warmed to greatly) and I’ll no doubt look out for him now that I know the background to his, and the Collective’s, aims.

Before I go, here is something I found when trying to find out a bit more about the man. It was from an interview he gave after having written his second book (yes it seems he’s multi-talented, also being an author – not jealous honest, grrr…).

James: I think I’ve grown out of that stuff now. When I was a kid, I was very much involved in genre, so I’d only like punk rock or dub reggae, say. Fortunately, as I’ve aged, I’ve thrown off such daft shackles and I no longer feel guilty about anything I like. I feel guiltier disliking things, especially if it’s music by people who I like as people. Guilty Music Displeasure, perhaps.

A great place to end, as since starting this blog I have had massive crises of confidence after writing about songs from my collection that others may well class as “a guilty pleasure”. I know everyone is usually very kind about it, but when James Yorkston also comes out and admits to now feeling more guilty about disliking music, I think I’m ok. 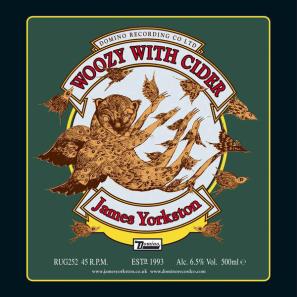 I watch the park quieten from the hotel window, I hear you softly sleep amongst the cars and saluting songbirds,
For a city whose size had scared me for years right now it’s a feeble evening row, not un-similar to a beach evening ending.
On the table to my left there’s a magazine with a picture of dead money, making a mockery of what I’d call art
But what would I know about the scene in the city that has swallowed up friends lovers and family,
Just give me a village the size of a teacup

You’re happier here spread out with your eyes closed,
I feel I should order a drink in celebration to welcome the summer, whose first day is ending
Should you wake you’d catch me of course and ask me the wisdom of drinking once more
I cast my mind back to yesterdays wedding where we got drunk and fell over
I did my best to be polite to a family I’d never met, but on numerous occasions, I guess, I could have tried harder
Of course by the end of the night I was a best friend with everyone and every ones wife but right now I couldn’t remember their names no matter how hard I try

As the sun glares through the hotel window I wonder of our future and where it will lead to,
I wonder if you’ll be laying there 10 years 20 years 30 years down the line
I’ll still be staring out at the street confused about love and life,
It’ll be interesting to see if anyone every bought those songs of mine if anyone heard those words that I never got quite right,
I think I can be honest in presuming the world is not exactly going to be leaping out of its bed to make me rich using my songs in adverts selling oranges or lemons

Who knows I may end up owning the whole street, or more likely sleeping under tree in the park opposite
Would the runners keep me awake or would I keep them asleep
I’d hope I have the sense to move back home, as lovely as today is, I‘d imagine the winter would be rather cold

I’d been told for years that the devil had the best tunes and that the devil lived down here whereas us country folk weren’t worth the salt from the road
Ex pat magazine editors who choose to loose their temper on the easily persuaded northern town dwellers
And sure enough 99 percent of the people I meet have scant regard for entertaining me, it seems I’m too old too slow too quiet and just wrong
And I’m glad. In their cocaine fuelled electronic cabarets I’ll be the man at the bar drinking overpriced whiskey from a bar maid who’s too good to catch my eye
She only works here two nights a week, the rest of the time she’s a singer in a rock and roll band
I bet she’d change her tune if I told her my album had peaked at number 172 and that I also had friends who worked in bars and that didn’t define who they are
Though it certainly helps their capacity to drink.

But I’ve strayed off the subject
Now I’ll be leaning over and waking you up, and you’ll squint at me through the cracks between your eyelids, woozy with cider
As if you’re asking exactly where we are and exactly what I wanted.
And I’ll be happy because we won’t be taking anything too seriously.

16 thoughts on “The Kingdom of Fife, James Yorkston and “Woozy With Cider””