Well, my planned post for this weekend has been gazumped, as for the last few days Rod Stewart’s The Killing Of Georgie has been playing on repeat in my cranium. Yes, for the  second week in a row I have been inspired by Rol’s Hot 100 Countdown series, where he chooses a song to represent a number, counting down from 100 to 1. Last week I wrote about Le Freak by Chic, as reference is made in the lyrics, to the famous Studio 54 Nightclub in New York City. This time I’ve decided to return to my Rod Stewart series, which was on hiatus, all because of another New York location, the junction of 53rd and 3rd. Back in the 1970s, this was a well-known spot for male prostitution (the Ramones even wrote a song about it called 53rd and 3rd), but I quickly remembered that it also appears in the lyrics of one of my favourite “story songs”, The Killing Of Georgie (Part I and II).

The sight of blood dispersed the gang
A crowd gathered, the police came
An ambulance screamed to a halt on Fifty-third and Third

I started this series towards the end of last year, when Mr Stewart seemed to be omnipresent on telly and radio, promoting his 30th studio album “Blood Red Roses”. He has had such longevity in the music business, I thought it would be a good idea to revisit his body of work, decade by decade. Once I got half way through the ’70s however, I kind of lost my way, as so many of his long-term fans abandoned him, feeling he had sold out. He had changed record label, parted company with the Faces and moved whole-heartedly to LA (acquiring a Hollywood actress as a girlfriend on the way, in the form of Britt Ekland). In retrospect, I can see this was the case, but here’s the thing – In the mid ’70s I was still a teenage girl, lapping up all that TOTP, Radio 1 and the world of teen mags threw at me, and rarely a week went by without us being treated to one of Rod’s new single releases. 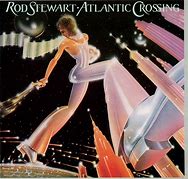 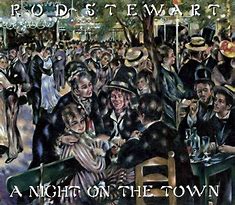 There is a trilogy of albums from that time I still own. He released the “Atlantic Crossing” album in 1975, “A Night On The Town” in 1976 and “Foot Loose & Fancy Free” in 1977. My favourite track from the album shown below was his cover of the Isley Brothers song This Old Heart of Mine. I have written often about how our teen idols were just substitutes for “real boys”, as we hadn’t quite got round to proper relationships yet, and wouldn’t do for quite some time. I think of my period of Rod Stewart fandom, as coinciding with the time we had moved on to “real boys” but in that really stupid, hormonally-induced, teenager-y way.

Most towns have them, that group of lads who seem to have an aura around them, who dress well, dance well and can have their pick of the girls. I ended up having a massive crush on a boy who looked just like the Rod who featured on the “Atlantic Crossing” inner sleeve. I pinned it to my bedroom wall, and cried as I listened to This Old Heart… , on repeat. Sometimes, if I was lucky, the boy asked me to dance. Sometimes he even walked me home, but looking back I was being utterly ridiculous – We had nothing in common, there was little conversation (just smooching), and I knew he would move on to another girl the following weekend. We haven’t changed much since Stone Age times I fear, and at a certain age we are still drawn to what we perceive as alpha males, who will in some way provide for us, and protect us from danger. As it turns out, most of these lads, who unlike us did not progress to any form of further or higher education, ended up doing pretty well for themselves, so the whole “aura” thing worked well for them.

But I have become side-tracked, as this post is supposed to be about The Killing Of Georgie (Part I and II). Now that I was actually taking heed of the lyrics in songs (which up until that point, not so much), I was blown away by the lyrics in what ended up being my favourite song from the album “A Night On The Town”. I am not going to include a video clip of Rod performing the song, as I think we can all agree, by this time he had turned into a parody of himself, wearing glam clothes, make-up and not really taking the performance seriously. After the release of Tonight’s The Night a new genre was even born, sex rock, although unbelievably, I was too naïve to pick up on all that back then.

Best to just listen to the audio I think. 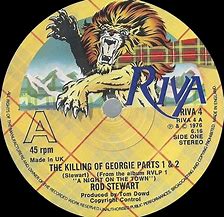 The Killing of Georgie (Part I and II) by Rod Stewart:

I have written about this song before, as part of my post about New York for my American Odyssey series (link here). As I said at the time:

New York has long been known for its flamboyant characters and Sting sang about one of them, eccentric gay icon Quentin Crisp, in his 1988 song Englishman In New York. Another “character” committed to song was when Rod Stewart wrote and recorded The Killing of Georgie (Part I and II) in 1976. This story song tells the tale of a young gay man who became successful and popular amongst Manhattan’s upper class – He was “the toast of the Great White Way”, which is the nickname given to the Theatre District of Midtown Manhattan. Georgie attends the opening night of a Broadway musical, but leaves “before the final curtain call” and heads across town. He is attacked on 53rd and 3rd by a gang of thieves, and one inadvertently kills him. The song was apparently based on a true story about a friend of Rod’s old band The Faces. The song combines the melancholy and sombre Part II (incidentally employing a melody identical to the Beatles’ Don’t Let Me Down) with the more popular Part I.

Before I go, a bit of an embarrassing exposé of something else from Alyson’s Archive (my box of teenage memorabilia). When “Foot Loose & Fancy Free” was released, one of the songs on it really summed up what I have been trying to recount above. I took to “pouring my heart out”, not in song, but in my 1978 diary. Yes, those boys with the aura, had a lot to answer for. I give you my hand-written lyrics to I Was Only Joking from January 1978. I laugh when I read the heading now, as to be honest, there never was a “relationship”, it was all in my head! 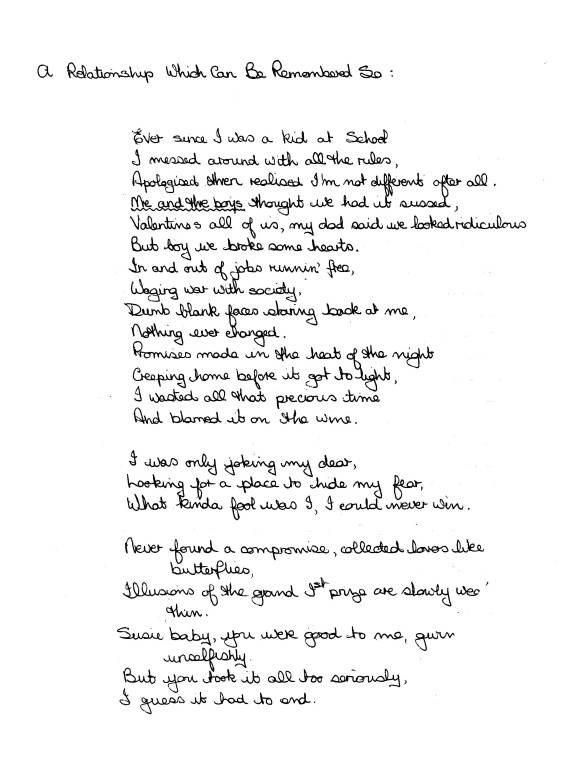 I Was Only Joking by Rod Stewart:

Rod gets a lot of flak for that late ’70s phase of his career, but the two featured songs here show he was a master story-teller. I Was Only Joking is a tale of regret and of the care-free minds of the young. As such, it has become one of Stewart’s best loved songs and it contains one of the best guitar solos in classic rock. Rod co-wrote it with guitarist Gary Grainger. The Susie alluded to in the song was Susannah Boffey, who met Rod in 1961 when she was a 17-year-old art student. In 1963 she gave birth to a daughter, who was fostered out and eventually adopted by a wealthy couple. In 2010 however, Sarah Streeter was finally admitted to her father’s family.

Enough confessionals for today, and time to move onto another theme I think for next week or else Rol will think I’m being a bit weird, stalking his blog for ideas. Plenty more ideas out there, just sadly not always enough time for them all.

A leather kid, a switchblade knife
He did not intend to take his life
He just pushed his luck a little too far that night

The sight of blood dispersed the gang
A crowd gathered, the police came
An ambulance screamed to a halt on Fifty-third and Third

He said “Never wait or hesitate
Get in kid, before it’s too late
You may never get another chance