Since writing about Elvis Presley last time, and how it came about that the first album I ever bought was one of his, I have done a lot more reading about “The King” and how he re-emerged in 1968 as one of the world’s most electrifying live performers. Hard to believe that prior to the ’68 Comeback Special he had not performed live since 1961.

The thing with Elvis however, and I absolutely understand that he is not for everyone, is that when you watched him perform, you could really tell that he “felt the music” like no other. The reason he got into such bother in the 1950s with his pelvic rotations and thrusts, was simply because he couldn’t stop himself! The music he developed with his band was a hybrid, particular to him and his Mississippi roots, of hillbilly, gospel, country and rhythm & blues. 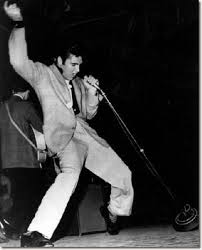 So, when he performed live over ten years later, in the intimate setting of the the Comeback Special studio at Burbank, you could really tell he was not just singing these songs he was “feeling them” with ever fibre of his being. In some of the Las Vegas shows, there are close-up shots where you can see the small muscles in his face move in time to the nuances of the music. None more so than during the sweet Bahamian lullaby segment within An American Trilogy. This song wasn’t actually written specifically for him but I cannot think of any artist for whom it could have had more significance, thus his obvious empathy with the music, lyrics and drama of the piece. I love watching him sing that one and I’m not even American so goodness how you guys across the pond must feel.

But the song I did want to write about was actually If I Can Dream from the ’68 Comeback Special. For some reason it was not until I re-visited the DVD last year after a friend and I at work had been discussing our love for old Elvis movies, that I really sat up and took notice of this song. It was the very last one of the show and he was dressed all in white, very much the southern gentleman. Now this is not one of those really popular songs that everyone will have heard of, and it wasn’t a big hit when it came out in the UK in 1969, but I was totally blown away by the lyrics and the passion with which he sang it. It had apparently been written just two months after the assassination of Martin Luther King who is directly quoted in the song. There was a definite gospel quality to his performance and whatever your beliefs, this was a powerful message coming from the man in the white suit.

After watching the clip numerous times, I was so blown away with the song that I decided to share it with my Facebook friends. As I said above however he is not to everyone’s taste and when I got no feedback, I took the post down. Imagine my delight therefore when before Christmas last year, a new album was released called “If I Can Dream” featuring vocal recordings of Elvis accompanied by orchestral arrangements from our very own Royal Philharmonic Orchestra. My new favourite Elvis song was the title track. Must have been one of those serendipitous things where I stumbled across something earlier in the year that would become the big hit of last Christmas. Over 47 years had elapsed since the song was written but (sadly) it was now as relevent as ever, if not more so. Probably why it resonated with the buying public so much.

I don’t know which version is best (perhaps Harry Hill could help with that one) but personally I still like the original as it is more purely Elvis. Great idea for an album however and meant that he is now back on top, being the artist with the most No. 1 albums ever in UK chart history. Not bad for someone who passed away 39 years ago.

If I Can Dream Lyrics
(Song by Walter Earl Brown)

There must be lights burning brighter somewhere
Got to be birds flying higher in a sky more blue
If I can dream of a better land
Where all my brothers walk hand in hand
Tell me why, oh why, oh why can’t my dream come true

There must be peace and understanding sometime
Strong winds of promise that will blow away
All the doubt and fear
If I can dream of a warmer sun
Where hope keeps shining on everyone
Tell me why, oh why, oh why won’t that sun appear