Well old friend, it’s been a very sad but oddly uplifting few days. I wrote my first letter to you back on Tuesday when the news of your death was still raw. Since then I have pulled together all the old vinyl and CDs (from both the Wham! and solo years) and had a good wallow through your back catalogue. There is much there to give joy but also material there that now breaks my heart – I don’t know about the Cowboys but I hope you are now with the Angels. A cringey thing to say I know, but I had to include that song somewhere as although not a massive commercial success in its own right, it is still my favourite from your album “Listen Without Prejudice Vol 1” (there never was a Vol 2 but that of course is another story).

Cowboys and Angels by George Michael:

When I say it has also been an oddly uplifting few days, that is because we have now heard about some of your (hitherto anonymous) amazing acts of generosity. You were always at the forefront whenever a charity concert or single was in being put together but most of us had no idea just how many random acts of kindness you were responsible for over the years. You helped out at homeless shelters and always stood up for the downtrodden – A prince among men.

But I have jumped ahead. In my last letter to you I did a fair bit of reminiscing about all that went on in both of our lives during the Wham! years of the early ’80s but what happened after that? – I think we both kind of grew up. You carved out a successful career as a very credible solo artist and I stopped being a flibbertigibbet, moved to a new town and took up a responsible job. Ok, so I still was a bit of a flibbertigibbet, but I now lived on my own and had to travel long distances to meet up with my old friends – When I did, it was just like old times.

In 1987 you released your first solo album “Faith” and during one of our reunion weekends that year it was played constantly – The girls were mightily taken with your new “look” and we found it quite amusing that so many young men were trying to recreate that look, what with the designer stubble, the leather jacket, the shades and even the glove – Looked great on you but on anyone else it just kind of looked silly. One of my friends had actually been given a video of the single I Want Your Sex by her boyfriend, as a present for her birthday – A few raised eyebrows about that one as how could one ever compete with “Gorgeous George” in the bedroom department!

But you were exhausted after all the hoopla that came with the promotion of “Faith” George, and to be honest so was I – Living in The Highlands of Scotland but spending every weekend travelling around the country was also exhausting and I started to make friends locally and even got myself a boyfriend who was to become Mr WIAA – Hurrah I hear you say (after getting bored with my stories of the on-off nature of my relationship with boyfriend no. 1 during the Wham! years).

In 1990 you released a much more contemplative album called “Listen Without Prejudice Vol 1” and the first single from it Praying for Time had lyrics that concerned social ills and injustice – We were starting to realise what kind of man you really were. This album was a very different affair and it alluded to your struggle with your artistic identity. Vol 2 never did appear and shortly after, you ended your record contract with Sony.

One good thing that came out of your dispute with the record company is that you had a fair bit of “gardening leave” and threw yourself into appearing at benefit concerts and such like. The one that has gone down in history, is when you took part in the Freddie Mercury Tribute Concert in 1992 along with Queen, Lisa Stansfield, Seal, David Bowie and many others. For some reason I can’t remember watching this concert live on telly at the time (put it down to getting engaged, married and buying and selling a property in a four month period) but it was obviously repeated in 1993 ahead of the Five Live EP where five tracks from the concert were released on a single EP, with all proceeds going to the Mercury Trust. This time we did see it, and my goodness it gave me goosebumps. You know when you witness something truly exceptional and your version of Somebody To Love with the other members of Queen really was exceptional (check out that note at 1:16).

Somebody To Love by George Michael and Queen:

Around this time I always had a blank tape in the VCR (remember those) and if something special came on telly I would quickly press “record”. This performance of Somebody To Love was revisited many times over the next few months – To see you, giving it your all George, in your gorgeous coral-coloured jacket (a great choice by the way) and blousy gold earring, was joy personified.

And here is where you feature in a really important moment in my life, and that of my daughter’s as it turns out. A couple of years later I found myself “with child” (blame the I Want Your Sex video) and it was suggested that we take a few cassette tapes with us to the labour suite come the hour. It all gets a bit frantic when everything starts to happen so we quickly grabbed the bag and two tapes to take with us – One was by Dina Carroll (not thought of her in ages) and the other was the Five Live EP. Despite the rush to get there things did not end up happening very quickly at all and we spent all evening, all night and then part of the next morning awaiting darling daughter’s arrival – All to the sounds of you George, plus those of Lisa Stansfield, Queen and occasionally Dina Carroll. Very apt really, and excuse the schmaltz, but she truly has been “somebody to love”.

I will admit that once you have a family, music has to take a back seat, especially if you are the mum I think, and I am sorry George but my attention to you was a tad neglected over the next few years but I did appreciate your “Older” album when it came out in 1996 and of course I had to buy “The Best of Wham!” in 1997, and then “Ladies and Gentlemen” in 1998. Funnily enough, by this time darling daughter was becoming a little character in her own right and one of our favourite things to do of an afternoon was to dance to your songs. One of the best for this was Club Tropicana where we re-enacted the long pre-amble with the sound of the car pulling up, the footsteps, the cicadas and then the opening of the doors to “Club Tropicana” – Fun times and needless to say she did become a bit of an aficionado of musical theatre and at one point we thought that a life on stage might be for her. 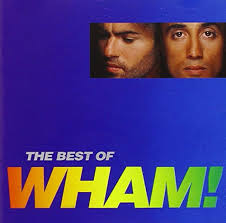 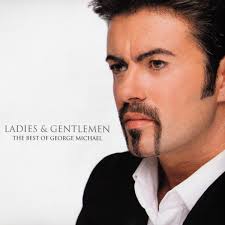 Oh George, here I am running out of words again and I’ve only got to 1998 but of course that was also the year that you kind of let yourself down a bit. None of us who were fans cared whether you were gay or not but you did “out” yourself in a very public way by getting arrested in LA – You say it was a subconsciously deliberate act, which it probably was, and it did give us the very entertaining Outside later on that year. Didn’t endear yourself to the LAPD with that one though, did you?

I can see, as fellow Chain-Ganger George (coincidental name) suggested last time, that this will have to be a game of three thirds as opposed to two halves, so until next time, thank you again Georgios Kyriacos for all the great music I have had the privilege to revisit this week due to your very untimely demise. I would much rather it had been under very different circumstances, but there we are.

Until next time, RIP to the Cowboy and the Angel who tried very hard to find “somebody to love”.

All you do is love and love is all you do
I should know by now the way I fought for you
You’re not to blame, everyone’s the same

I know you think that you’re safe
Mister
Harmless deception
That keeps love at bay
It’s the ones who resist that we most want to kiss
Wouldn’t you say?

But that scar on your face
That beautiful face of yours
Don’t you think that I’d know
They’ve hurt you, before

Take this man to your place
Maybe his hands can help you forget
Please be stronger than your past
The future may still give you a chance
The future, the future, not the past

11 thoughts on “An Open Letter to George Michael RIP, Part 2 – The Solo Years”