Well, it’s over a week since I’ve posted anything new but what shall I write about today? Time to refer to my trusty blogging notebook (it’s a thing) in order to check out the long list of “ideas for future posts” that seems to have developed. Now this list is growing faster than I can keep up with the writing, but I am drawn to a post idea that I had last June, around the time of my birthday, when I wrote about those artists who were really big around the time I was born. I always think it’s a bit silly to receive a gift with songs from the year of your birth as you will have no memory of them, or affinity to them at all, as it is not until you around six or seven that you really start to take heed of such things and remember them in later life.

Back then my chosen featured artist (from 1960) was Adam Faith but included in the long list of his contemporaries was Eden Kane. I had no idea until that point that Eden Kane was in fact Richard Sarstedt who was the older brother of Peter and Robin, both of whom I did remember from the “tracks of my years”. 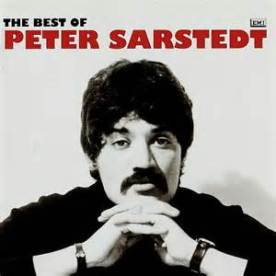 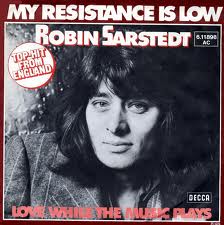 The Sarstedt brothers, like Cliff Richard and many other shiny stars from the world of entertainment (is there a connection I wonder?), were born in India in the 1940s. Sadly their father died quite young after which they came back, with their mother, to live in the UK. Richard was first off the mark and formed a skiffle group. Like that other group of three brothers, the Bee Gees, he included his younger siblings but after winning a talent contest changed his name to Eden Kane and went onto solo success. His 1960 song Well I Ask You even reached the No. 1 spot in the UK Singles Chart.

Eden/Richard’s career was on the wane by 1964 as groups such as the Beatles and the Rolling Stones started to take over the airwaves. On a stopover in Los Angeles later that year however he met journalist Charlene Groman, the sister of American actress Stefanie Powers, whom he went on to marry. He has lived and worked in LA ever since, and they are still happily married today.

Peter Sarstedt was the next brother to pick up the mantle of singing stardom. Although another pop artist, his music was more derived from traditional folk music. He is best known for writing and performing Where Do You Go To (My Lovely) which again was a No. 1 hit in the UK Singles Chart, this time in 1969, and even won an Ivor Novello Award. It is very much a “story song” about a fictional girl called Marie-Claire who grows up on the poverty-stricken backstreets of Naples, but soon becomes a member of the international jet set and goes on to live in Paris. The lyrics are from the perspective of a childhood friend but the rhetorical question of the title suggests that her glamorous lifestyle may not have brought Marie-Claire happiness or contentment. The lyrics of the song reflect the fact that we seemed to be having a bit of a love affair with all things European that year, what with Jane, Serge and Jacques Brel also making a massive impact. Oh dear, how things change.

Here is a great clip that not only showcases Peter, his lovely song, and stupendous moustache, but also Simon Dee whom some of us of a certain age will remember well from late ’60s Saturday night telly. Sadly Peter Sarstedt died in January this year at the age of 75 and as happened last year, I am only now getting round to writing about him, after his death. The artists who have formed the “tracks of my years” are leaving us faster than I can get round to writing about them – Will have to pick up the pace.

Where Do You Go To (My Lovely) by Peter Sarstedt:

The third brother, Robin Sarstedt (whose actual name was Clive) had a bit of a hit in 1976 with the Hoagy Carmichael-penned My Resistance Is Low. I remember this song well as it was from the era when I probably listened to more chart music than at any other point in my life. In the mid ’70s we seemed to be having a love affair with these old classics, possibly because there were quite a few films around at that time set in earlier decades and I know that girl’s clothes and hairstyles also had a distinct retro feel to them. I should know because I had a couple of dresses which were very much in the style of the ’30s and ’40s. ‘Twas the times.

So, “What’s It All About?” – I really will have to pick up the pace. If I am getting older, so are my musical heroes, and it’s much nicer writing about them when they are still alive as opposed to after they have died. I see that Joni from Sister Sledge died yesterday and last month it was Al Jarreau – Both are linked to “posts pending” in my blogging notebook so again it will have to be a “posthumous post” (so much alliteration).

And, although I don’t really do politics here, this of course is the month when the Triggering of Article 50 happens. Back in 1969 we weren’t even in Europe yet and here was Peter Sarstedt writing songs about girls called Marie-Claire from Naples, Sasha Distel, Marlene Dietrich, Zizi Jeanmaire, Balmain and Picasso. Somewhere along the line something has gone horribly wrong.

You talk like Marlene Dietrich
And you dance like Zizi Jeanmaire
Your clothes are all made by Balmain
And there`s diamonds and pearls in your hair
You live in a fancy apartment
Of the Boulevard of St. Michel
Where you keep your Rolling Stones records
And a friend of Sacha Distel

I’ve seen all your qualifications
You got from the Sorbonne
And the painting you stole from Picasso
Your loveliness goes on and on, yes it does
When you go on your summer vacation
You go to Juan-les-Pins
With your carefully designed topless swimsuit
You get an even suntan, on your back and on your legs
When the snow falls you’re found in St. Moritz
With the others of the jet-set
And you sip your Napoleon Brandy
But you never get your lips wet

But where do you go to my lovely
When you’re alone in your bed
Tell me the thoughts that surround you
I want to look inside your head, yes I do

Your name is heard in high places
You know the Aga Khan
He sent you a racehorse for Christmas
And you keep it just for fun, for a laugh haha
They say that when you get married
It’ll be to a millionaire
But they don’t realize where you came from
And I wonder if they really care, they give a damn

I remember the back streets of Naples
Two children begging in rags
Both touched with a burning ambition
To shake off their lowly brown tags, yes they try
So look into my face Marie-Claire
And remember just who you are
Then go and forget me forever
`Cause I know you still bear
the scar, deep inside, yes you do

6 thoughts on “Peter Sarstedt, A Trio of Brothers and “Where Do You Go To My Lovely?””