Well, look what I found in my Christmas Stocking. Not strictly in the stocking as not the best shape to fit, and, not strictly a surprise present from the big man in the red suit (as I had bought it for myself), but a full two years on from his death, I still have a yearning to collect more George Michael goodies. When I saw this glossy mag in our local branch of WH Smith last week, I just knew it had to be mine, all mine…. .

Christmas Day for us this year was very chilled, and the first of a new regime where we have none of the older generation around any more to join us. A bit strange, but meant there was none of that manic preparation that goes into hosting a formal Christmas lunch complete with all the traditional accompaniments, accoutrements and accessories. A visit to the care home took place in the morning to exchange presents with my mum (DD had ordered a very special bear for her that plays a Jim Reeves song), followed by a mid-day bacon sandwich and the opening of our own presents. Then there was a Facetime call to DD’s boyfriend at the other end of the country, and a virtual first meeting between the two sets of parents (landmark moment). Once we’d had an afternoon walk along the river, followed by a bit of telly, I leisurely prepared a turkey dinner with all the trimmings which we simply ate in our new kitchen this year – Yes, all very chilled indeed. 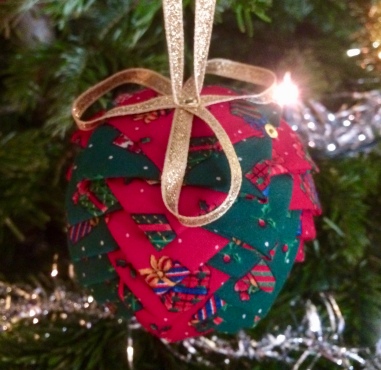 My favourite tree decoration- Bought when DD was a baby

When it got to evening, George of course beckoned, and by the time I went to bed I think I’d read right to the end of the magazine. Just in case I’d missed anything, I re-read it again from cover to cover on Boxing Day, and although it contained nothing particularly new that I didn’t already know, a few lines jumped out at me, and I took notes:

George, as we all know, was one of the key vocalists on the 1984 Band Aid charity single Do They Know It’s Christmas?, however on the day of the recording he said he felt really uncomfortable, as Wham! were treated as a bit of a joke by their peers, with (careless?) whispers and in-jokes being made at their expense. By this time Wham! had left their baby-biker image behind, and now sported blond highlights, gold hoop earrings and Day-Glo shorts, but George found it hard to believe people couldn’t see past the image and appreciate the music they were making. He was still only 20, but was writing, producing and arranging these records that jumped out of the radio. If that is true, shame on you fellow Band Aid participants. (Also, did you know that having released Last Christmas shortly before the Band Aid single, they donated all the royalties to the Ethiopia Appeal?)

Something else I learnt from the magazine, was that Wham! would never have come about if not for Andrew Ridgeley, who was the driving force behind forming a band. George was the geeky songwriter, and a career in music was very much frowned upon by his strict father, who wanted him to join the family business. The Wham! image therefore belonged to Andrew, who was outgoing, sociable and loved going out dancing with girls. George lived vicariously through Andrew, but after being impressed by the confidence exuded by the character Tony Manero in Saturday Night Fever, he decided to lose weight, acquire some contact lenses and threw himself into the local disco scene. Without Andrew Ridgeley there would have been no George Michael.

During his career George had to face hostility from artists who attacked him for his appropriation of black music. He fought back, and ended up joining forces at various stages of his career with artists such as Aretha Franklin, Mary J Blige and Whitney Houston, who held him in high regard. His earliest musical influences however had come from artists such as Stevie Wonder and The Isley Brothers. In fact one of my favourite Wham! songs is If You Were There, which was not for once penned by George, but was an Isley Brothers cover included on their second album “Make It Big”.

If You Were There by Wham!:


If You Were There was also the title of the 1997 Wham! “Best Of” album, which of course I had to buy. DD was a mere toddler back then, but I remember well dancing around the living room with her whilst listening to it, recreating the moves. We were now nearly 15 years on, but yes, I had been there and yes, I did know… .

So, “What’s It All About?” – Whenever I think I’ve written my last George Michael post, something else comes along, and prompts another one. In this case it was the magazine I bought myself as a treat for Christmas (other gifts did appear in my stocking by the way).

I am often embarrassed by some of the songs I share around here, as they are unashamedly of the pop persuasion, but time and time again I have been vindicated (the Bee Gees, the Carpenters et al). George Michael himself proudly championed great pop music as true art. Here is a quote from him:

“If you listen to a Supremes or a Beatles record, which was made in the days when pop was accepted as an art of sorts, how can you not realise that the elation of a good pop record is an art form? Somewhere along the way, pop lost all its respect. And I think I kind of stubbornly stick up for all of that.”

I don’t think I’ll be back again until the New Year – Can it really be almost 2019, the last year of this decade we didn’t know what to call. Is it “The Teens”? – Not sure. Whatever it’s called, hope your Hogmanay celebrations go well. For one night at least, we can forget all the political shenanigans that surround us at the moment, and just enjoy ourselves. The first few months of 2019 will be interesting, that’s for sure!

If You Were There Lyrics
(Song by The Isley Brothers)

I care for you baby, I
Swear that I care
There’s no need for you
Not to have faith in me
‘Cos it’s by your side girl
That I long to be
Yes there are times with
my friends when I don’t know
have to much to say uh, uh
What you don’t know is
with you could never act that way

Although not much was made of the circumstances that surrounded George’s death in the magazine, after reading the single page that documented the last four years of his life, it appears a premature death was almost inevitable. He dodged a bullet in 2012, after becoming seriously ill in Vienna during the Symphonica tour, but he was also unwell in 2013, 2014 and 2015. Best to remember him in his prime – How he would have wanted it, I’m sure.

16 thoughts on “George Michael, The Isley Brothers and “If You Were There””