A short post compared to my usual tomes but last week I had a bit of a meltdown, where the very thought of looking at my home computer screen induced the collywobbles. ‘Tis all the fault of this new-fangled, hot desking, paperless office I have to turn up to every day – It’s not for me I’ve decided and Mr WIAA and I have been having very serious talks about what is to be done.

In the meantime, as this is in effect my web-diary, I want to record the fact that a very simple jazz ballad sung by a chap with a dicky ticker won last weekend’s Eurovision Song Contest for Portugal. It was written by his sister and after being announced as the winner, the pair got up on stage to perform the song together.

I am a fan of Eurovision and over the last 12 years we have watched it with the same set of friends who again came round for Saturday night’s show. I had intended to do a series of posts last week about the “Wacky World of Eurovision” (which is why some of you saw that title appear on your sidebar), but after the meltdown, that didn’t come to pass. Also I think I possibly had a bit of a wobble about ruining any music-blogging credibility I may have left!

In the end however, amidst a sea of the usual weird and wonderful big production numbers, it was a simple love song that came out on top. We all scored it in our top three and it seems the rest of Europe agreed. Reassuringly, our own UK entry sung by Lucie Jones also did pretty well (relatively speaking) and here I was thinking that after all the “triggering” that’s been going on around here recently, we would end up at the bottom of the pile.

And so I give you the winning song, Amar Pelos Dois, written by Luisa Sobral and sung by her brother Salvador Sobral. The lyrics were performed in Portuguese but somehow we could still tell that it was the story of a lost love and of the singer’s continuous search to find her.

So, “What’s It All About?” – I love what all this new technology can do for us but having just worked out that some days I will now perhaps spend 16 hours in front of a bank of computer screens, something will have to be done. Mr Sobral above has given up all social media and the backdrop for his song was not pyrotechnics but calming scenes from nature. Why did his song win? It was beautiful indeed but I also think that those of us with addled brains found it a real solace to listen to, and for me, it harked back to simpler times. In the short-term I think I’ll have to battle on, but for the longer-term, the life of a robot is not for me – Thank you Salvador for reminding me of that on Saturday night and please, please look after that dicky ticker because I want you, and your sweet songs, to be around for some time to come.

If one day someone asks about me
Tell them I lived to love you
Before you, I only existed
Tired and with nothing to give

My dear, listen to my prayers
I beg you to return, to want me again
I know that one can’t love alone
Maybe slowly you might learn again

My dear, listen to my prayers
I beg you to return, to want me again
I know that one can’t love alone
Maybe slowly you might learn again

If your heart doesn’t wish to give in
Not to feel passion, not to suffer
Without making plans of what will come after
My heart can love for the both of us

Although I initially thought that Salvador’s win at Eurovision was purely down to the simplicity of his song there was most definitely another factor at play – The big winner at this year’s Oscars was the film La La Land (although we have to remind ourselves it didn’t actually win the award for Best Film despite having been announced as such by Warren Beatty on the night). It also harked back in style to the romantic musicals of the ’40s and ’50s, and the musical numbers were simple, jazz influenced, piano-accompanied delights. The “halo effect” is definitely a thing, and one I am always highly influenced by, so it is likely that those of us who enjoyed Salvador’s song subconsciously associated it with the music from La La Land. In case you’re not aware of any of the songs from its soundtrack, here is my favourite, City Of Stars sung by its two stars, Ryan Gosling and Emma Stone. 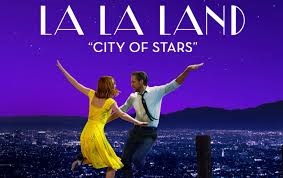 City of Stars by Ryan Gosling and Emma Stone: