The original premise of this blog was to write about a random piece of music heard on the radio, and in my case that is usually BBC Radio 2 nowadays. So many musical memories by the time you get to your mid-fifties that just about everything played on that station conjures up something, so it made sense. The Soundtrack of My Life would end up becoming The Story of My Life.

What appears to have happened is that this has been an exceptional week – David Bowie and Alan Rickman both died.  This kind of threw me and instead of writing randomly, a lot of the week was spent looking back at songs associated with both of those people. Occurred to me that this is highly likely to become a feature of this blog as the music I remember from the 1960s onwards, would have been made by people if not a generation older than myself, certainly a good few years and sadly they will be approaching an advanced age by now. Enough of this maudlin talk however – Hoping there will be no more shock news this coming week or indeed for quite some time. Too much to take in.

So today I did try to stick to my original premise and when I turned on the radio this morning it was Steve Wright with his Sunday Love Songs. Not a fan but decided to stick with it. The first song was Love is All Around by The Troggs but ironically I have already written about that one this week so passed on it. The next was Careless Whisper by George Michael. Perfect, as this is one of my all-time favourite songs. It was released in the summer of 1984 and was George’s first solo effort, his work to date always having been with his best friend Andew Ridgeley, the other half of Wham!. Although they had started out as a duo it had become apparent that Ridgeley was mainly there for moral support as he didn’t sing, play an instrument or write the songs. To be fair, George has always said that he wouldn’t have had the confidence to start out in music if Andrew hadn’t been by his side so just as well it happened that way, but by 1984, it seems he needed a few solo projects.

It was summertime and George had yet again come up with an amazing-sounding song. The video was shot in Miami which added the necessary glamour, and the saxophone-playing gave it a sultry, jazzy sound. Sad lyrics but George was looking good and his teen-idol status went through the roof. Yes, lots of girls with his picture on their walls that summer!

As for me, I was still in the midst of my big hair, tanned skin, and pastel-coloured clothes and lipstick period – Unusual not to have been in the mid ’80s. I was living in a really nice flat with my best friends and had, for the first time in eight years, no exams to sit that summer. I know there was a lot of unemployment and social unrest at the time but if you were 24 and in work, life was not too shabby. In London, the term “yuppie” had been coined and although we weren’t earning “loadsamoney” (like the Harry Enfield character of the time) we were definitely young, urban and professional. A lot of partying was done that year and not a lot of saving for the future. The music in the background was a mixture of all that was popular at the time and it most definitely included George Michael with his big ballad – A slow dance number if ever there was one. 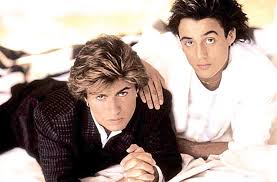 A slight downside to the year of partying in 1984 was that we all split up with our long-term University boyfriends. Still not sure if that would have happened if we hadn’t been having such a great social life but as careers took off, more time was being spent with new colleagues and that ended up being the result. Or, could it have been that 1984 was the year we all decided to knit them a jumper? Months of hard work (fortunately I opted for a fairly simple pattern) and at the end of the year, no boyfriend. I for one even ended up at the doctors with a worryingly mysterious ailment – Turned out it was muscle strain from all the knitting (these were big, sporty lads and by the time you reached row 300 there was a lot of wool to support). Who knows, but at least in the midst of all the trauma and health scares, we had George Michael and Careless Whisper for solace.

One thought on “George Michael, “Careless Whisper” and the Summer of 1984”