I’ve come to realise that although I had a plan for how I would select songs to write about, they end up choosing themselves. The death of David Bowie last week led me to spend a lot of time thinking about him and then with the death of Alan Rickman, that led me to thinking about songs from movies. Somehow we ended up with Careless Whisper by George Michael which was the first randomly chosen song of last week as it turned out but followed on very nicely from the post about other early ’80s post-New Romantic pop acts.

So, the soundtrack of our lives can come from a variety of sources and in my case it is as much from television shows and films as from the music charts – This afternoon when I switched on the radio, a French song was playing and it took me right back to the kid’s TV show from the 1960s, Belle and Sebastian. There were still only two channels available at that time on our television set in rural Scotland, so very few programmes to choose from. Belle was a Pyrenean mountain dog and every week from late 1967 to early 1968, Belle and Sebastian enchanted us all, in black and white, with their adventures. It was a French show set in the Alps, and dubbed into English by the BBC. The most memorable thing about it for me however was the deeply moving opening song performed by the boy who played Sebastian – L’Oiseau.  Listening to it again just now, I can still picture that scene right at the beginning where you see young Sebastian scrambling up the snowy mountain-side with his big white dog, Belle.

The TV schedules at that time had many other European children’s dramas such as Tales from Europe (set in the most amazing Medieval locations) and the very best of them all – White Horses. This one was made by a Yugoslavian television company and followed the adventures of Julia and the beautiful Lipizanner horses raised on her Uncle Dimitri’s stud farm outside Belgrade. Again it was in black and white and again dubbed into English. First broadcast on British TV in 1968 it became a firm favourite especially with horse-loving little girls. The best bit of the show however was the theme song White Horses sung by Jackie Lee or, by the time it was released as a single in the April of that year, just Jacky. Some pieces of music just can’t help but make you feel good and this is most definitely one of them, often coming at the top of polls of the best TV theme song ever.

What I do remember vividly however from this time of White Horses in the late ’60s, was that I was a very happy child. We were a family of three – My mum, dad and me, with my granny and grandad living next door. We had a big garden with vegetables, soft fruit, flowers and plenty of areas of grass to play on. There were neighbour’s children to play with and my cousins came to stay every school holiday. I realise now how lucky I was – Very different for many city-dwelling children back in those days, and different for nearly all children nowadays. All we would have needed to make it perfect was a white Lipizanner stallion and Jacky singing White Horses in the background. Ok I’ve gone too far now – I’ll sign out for today before it gets any more schmaltzy! 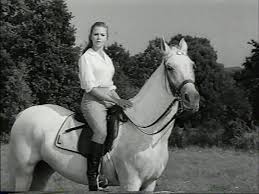 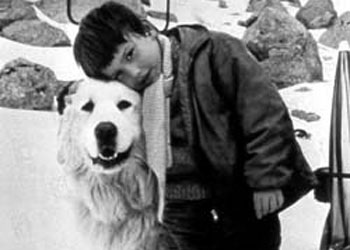 On white horses let me ride away
To my world of dreams so far away
Let me run
To the sun.

Where the clouds are made of candy floss
As the day is born.
When the stars are gone
We’ll race to meet the dawn