Realised after ten days of randomly (or not so randomly as it turned out) choosing songs to write about, that none (other than Jacky’s “White Horses” theme song) were by women. How could this have happened I wondered? I then looked back at lists of No. 1 hits over the decades and in 1968, only 2 out of a total of 21 featured women (Mary Hopkin, and Esther Ofarim of Cinderella Rockefella fame) but by 1998, 17 out of a total of 29 featured women (mainly girl bands like The Spice Girls, Aqua, All Saints and B*Witched) – How things had changed.

Right in the middle of that 30 year period, a young lady from Michigan really started to make her mark, and it got me wondering how much of it was down to her? Probably lots of factors contributed, but the incredibly driven and self-confident Madonna Louise Ciccone burst onto the scene in 1984 and immediately had a string of great dance-floor hit records. Nile Rodgers again got on board (his name keeps popping up) and produced her first album – The rest is history. She is the most successful female chart act of all time. Like Bowie she continually reinvents herself so hard to work out who the real Madonna is. We will probably never know but I tend to think that the real Madonna was probably not unlike her streetwise character in the 1985 film Desperately Seeking Susan. Breezing through Manhattan’s East Village (pre-gentrification), pulling off that quirky look, getting into scrapes! Great film and because she essentially played herself, the only one where she received critical acclaim (sorry Madge).

Anyway, she released some great songs that year and my favourite is Crazy For You. It was actually from another film, which I have never seen and didn’t stand the test of time, but there is something about that song that gives me goosebumps. Not from hearing it in 1985 but after watching the film 13 Going On 30 with my daughter much, much later (key song on the soundtrack). The lyrics and “feel” of the song took me back to that coming-of-age time in your life when the most important thing in the world, at the end of a night out, was to find yourself in the arms of the boy you adored from afar, hoping he adored you back. The ’70s dance halls where we converged were very smokey and very dark so really conjured up those memories. All too often we went home full of despair having witnessed the boy of our dreams in the arms of another girl. We would however always return the following week, in the hope he would again be there, and that this time it would end differently….

Crazy For You by Madonna:

Crazy For You Lyrics
(Song by John Bettis/Jon Lind)

I see you through the smokey air
Can’t you feel the weight of my stare
You’re so close but still a world away
What I’m dying to say, is that

Slowly now we begin to move
Every breath I’m deeper into you
Soon we two are standing still in time
If you read my mind, you’ll see 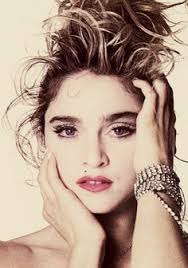