Following on from my last post, I mentioned that 1979 was my last disco-dancing year as around that time I met a boy and morphed into a full late-70s student. We dressed in interesting clothes from charity shops (they weren’t called vintage in those days), hung around dingy bars and listened to “The Songs of Leonard Cohen” (in between attending lectures of course). Looking back, the tracks of my years had up until then, revolved around what was on Top of The Pops, what was played on BBC Radio 1 and the music from film soundtracks so this was a whole new branch of music that I hadn’t really experienced before. Artists like Cohen didn’t release singles that would appear in a chart show run-down, but whole albums of songs to be listened to late at night, in a soporific condition with preferably, a significant other.

Also, the great thing about meeting a boy who flat-shared with an older brother, was that you immediately had access to their record collection as well. Being of the opposite sex and having a few more years’ worth of vinyl, his collection was vastly different to my own and so it came about, that in late 1979 I discovered and formed a relationship with Joni Mitchell, Bob Dylan, Mr Cohen mentioned above, and last but not least, Carole King.

One of the albums we listened to a lot at that time was “Tapestry” which had been Album of the Year in 1972 and went on to sell over 15 million copies. I wasn’t that familiar with Carole King until this time but a lot of the tracks on the album were indeed familiar, as she had been part of that amazing team of Brill Building songwriters who prolifically churned out songs for ’60s artists such as Aretha Franklin and The Shirelles. She wrote, or co-wrote, all of the songs on Tapestry and in doing so created a truly amazing body of work, most of the songs becoming standards in their own right. I think my favourite is It’s Too Late, a really sad song about the end of a relationship and of course by this time King’s marriage to Gerry Goffin, her songwriting partner and high school sweetheart was over, so bittersweet. Interesting also that during this intensely successful period of her career, Carole King had moved to Laurel Canyon, Los Angeles and was hanging out with the likes of James Taylor and Joni Mitchell. I have mentioned Laurel Canyon before in relation to The Eagles, Jackson Brown and Linda Ronstadt – Must have been quite a place back in the day.

It’s Too Late by Carole King:

Not really a coincidence that it’s Tapestry I’m writing about today however – I noticed earlier on social media that it’s the 45th Anniversary of its release. Any artist releasing an album today will have to wait until the year 2061 to celebrate the same anniversary. What will our world be like then? Who knows but I am optimistic that good music will still be around and perhaps we may still enjoy listening to the dulcet tones of Carole King, and Tapestry! 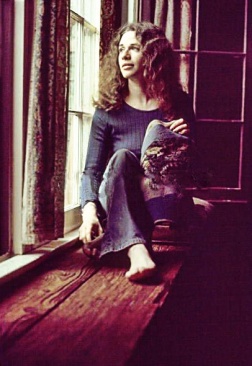 Stayed in bed all morning just to pass the time
There’s something wrong here, there can be no denying
One of us is changing, or maybe we’ve just stopped trying

And it’s too late baby, it’s too late
Though we really did try to make it
Something inside has died and I can’t hide
And I just can’t fake it

There’ll be good times again for me and you
But we just can’t stay together, don’t you feel it too
Still I’m glad for what we had, and how I once loved you