It has just occurred to me that I have now written about Celtic soul, Celtic rock and Celtic punk since starting the blog two months ago and have ended up writing about two traditional songs with lyrics attributed to unknown in the last week alone. Time to get back to more mainstream pop material I think but as mentioned earlier this week, the song Loch Lomond sung by Runrig is a great way to end a “do” and last night that is exactly what happened at my sister-in-law’s “big birthday” party. All age groups gather in a circle and after about 3 minutes of hand-holding and arm-swinging, the mayhem ensues. You’ll have to come to Scotland and experience it sometime.

So, what could be the opposite of Celtic music I wonder – Something unconventional, not traditional; something from a country far from the fringes of Northwestern Europe; something perhaps by a solo artist and not a band of instrumentalists – I know, Rise Like a Phoenix by Conchita Wurst, the winner of the 2014 Eurovision Song Contest!

I have written about my love for all things Eurovision before (link here) and how last year, after watching the song contest on television for nearly 50 years, I went with friends to watch it LIVE in Vienna. The reason it was held in that beautiful city was of course because the previous year’s winner was the inimitable Conchita Wurst, an Austrian drag queen who treated us to an amazing performance of her country’s entry, Rise Like a Pheonix (a potential James Bond theme song if ever there was one).

It is now nearing the end of March and this year’s contest is just around the corner being held this year in Stockholm as the wonderful Måns Zelmerlöw won last year for Sweden with his song Heroes. But back to the story of how a drag queen ended up winning the 2014 contest. She was selected to represent her country after receiving the most votes during the selection process but of course she is not going to be for everyone, and many did see her selection as promoting LGBT rights. On the other hand, she has now established herself as a gay icon and regularly performs at pride parades and has been invited to the UN Office in Vienna and the European Parliament. 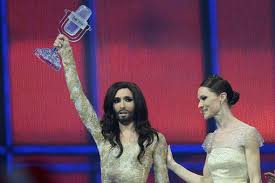 The inclusion of the beard as part of the Wurst character was very much a statement to say that “you can achieve anything, no matter who you are or how you look.” Her message is very much one of tolerance and as Graham Norton said after the contest, it seemed like Eurovision had done something for once that mattered just a little bit.

Despite the controversy about the inclusion of Conchita and her song in the 2014 contest, especially in Eastern Europe, from the personal experience of having visited Vienna last year, she is a bit of a national treasure there. She was one of the co-hosts of the show and presided over the green room. Her voice featured on the metro system as she had recorded announcements for visitors. Her face was on the cover of just about every newspaper and magazine and I lost count of the many groups of people wearing little knitted beards. (There must have been a pattern made available in advance of the contest.) 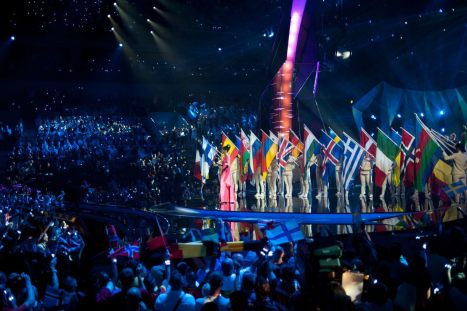 As for us, it doesn’t look as if we will be making the trip to this year’s contest in Stockholm so it will be back to the usual plan of hosting a get-together and supplying little flags, score-sheets and the food & drink of the host nation. Some countries are easier than others, Greece for example, but when Lordi won there in 2006 they took the next contest to Finland which was a catering challenge indeed for our 2007 get-together! Looks as if we’ll be consuming a Smörgåsbord of Svinhufvud, Hummer and Speksill (?) this year but that’s the great thing about Eurovision, the sheer cultural diversity between all the countries that participate. In 2014, having a drag queen win the grand final for Austria did appear to be a victory for diversity and tolerance in Europe – Long may it continue. 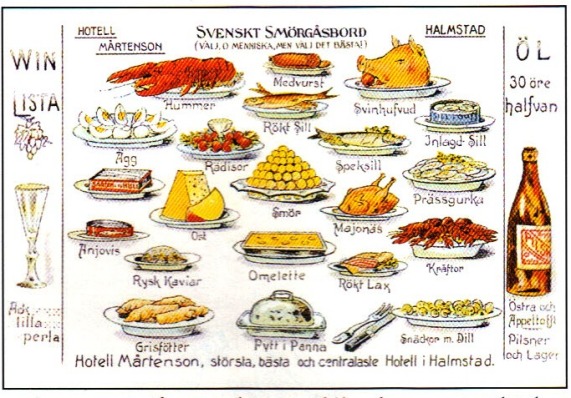 Peering from the mirror
No, that isn’t me
Stranger getting nearer
Who can this person be

3 thoughts on “Eurovision, Conchita Wurst and “Rise Like A Phoenix””