Yesterday I wrote about Rise Like a Pheonix, the song that won the Eurovision Song Contest in 2014, and how it was very much in the style of a James Bond theme song. Led me to think about all those great (and some not so great) themes from over 50 years of Bond films and I have put together my own list, ranked by personal preference. There are many such lists out there and it seems there is mixed opinion on which is the best theme song ever but at the moment, for me, it is You Only Live Twice by Nancy Sinatra from the 1967 film of the same name.

You Only Live Twice by Nancy Sinatra:

The song has a really beautiful intro which Robbie Williams cleverly used for his recording of Millennium in 1998. In the video for Millennium, Robbie, dressed in a tuxedo parodies James Bond and references many of the early Sean Connery films. Turned out to be a great way to get back on top after his departure from Take That.

But back to my list – Nancy up there at the top at the moment but like any list it changes all the time, especially with oft-heard songs such as these. There seems to be a tipping point at which a song has just been listened to just once too often and it goes from being a joy, to something you have become a bit tired and weary of hearing. I hate when that happens and rush to turn off the radio if one of my all-time favourites comes on as I just don’t want to reach that point any sooner than need be. 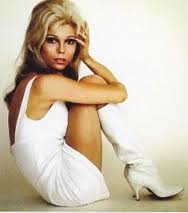 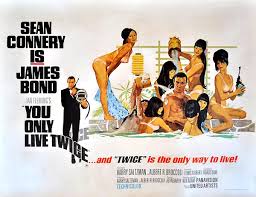 I still think the Golden Age of Bond movies was the Sean Connery era or perhaps it is just that I am reminded of watching them on television as a child. By the early ’70s they were a staple on high days and holidays and because the world was a much bigger place then, with foreign travel something very few of us experienced, it was worth watching them for the glamorous locations alone. Although the age of feminism and bra-burning had well and truly started by then, it really didn’t filter through to Bond movies until the Timothy Dalton era and for many of us, that was a low point in the franchise. To try and make Bond politically correct was a stretch but with the latest batch of movies starring Daniel Craig as Bond, they seem to have found the right balance.

And if you want to compare intros, here is a clip of Robbie playing Mr Bond – Don’t think he’ll ever get the main gig but it was great fun watching him in those videos from his album “I’ve Been Expecting You”. A wonderful homage to those glamorous films of the ’60s.

You Only Live Twice Lyrics
(Song by Leslie Bricusse/John Barry)

This dream is for you, so pay the price
Make one dream come true, you only live twice

Just in case anyone else has “anorak tendencies” like myself, yes there have been 24 Bond movies to date (and two by other production companies) but the first one, Dr No in 1962, did not have a title song. Monty Norman did however compose the now infamous James Bond theme for it which has been used in all the films since.

For the 1969 film On Her Majesty’s Secret Service starring one-time Bond George Lazenby, John Barry was the composer of the opening theme of the same name but Louis Armstrong’s song We Have All The Time In The World was a secondary theme, played at the end of the film. The only other exception to the rule was that Matt Monro’s vocal version of From Russia With Love was not played for the opening titles to that film but used for the closing credits.

2 thoughts on “Bond Themes, Nancy Sinatra and “You Only Live Twice””