I seem to have been languishing in the late ’70s for some time now, writing about songs that many think of as a bit “naff” (although I don’t) so time to move to a slightly different era perhaps, and to a different style of music.

Most people will have heard the song A Horse With No Name by America at some point in their lives. It was a hit in the UK for them in 1971 but it turns out they were actually from Ruislip outside London. Would seem a bit bizarre if not for the fact all three band members had US Airforce Officer fathers who were based over here, and that is how they met. There is no escaping the fact their music is very much in the style of Neil Young, and Crosby, Stills and Nash, but that was exactly what they intended so it worked well for them. I have written before about how kids like myself who came from rural Scotland, found this kind of music very exotic and otherworldly. We had no dark desert highways or tequila sunrises, we certainly didn’t have warm winds blowing the stars around and we wouldn’t have dreamt of crossing a desert on a horse with no name. Oh no, plenty of cows and sheep where I came from and lots of lush grass, but the whole desert imagery thing was something well beyond our ken.

A Horse With No Name by America:

The amusing thing for me about this “desert” song, is that it was actually recorded in the UK, at a studio in Puddletown, Dorset (you couldn’t make it up). It was released here first and it was not until the following year that it was a hit in the US. Yet another group of artists with a hybrid transatlantic upbringing which might have contributed to their success on both sides of the pond (don’t like that term for the massive ocean that is the Atlantic but seems to have become the term used to make us feel closer to each other than is really the case). Rupert Holmes, whom I wrote about last week, was born in Cheshire to an English mother as a result of his US Army Officer father being stationed there. There are many more stories like this and it might be an idea for a series some day.

But back to the song – For me, it will always be associated with my school days. In Primary School I always wore my long hair tied back in a ponytail so it was inevitable that the joker of the class would assign me an “equine” nickname. Too embarrassing to spill the beans here but suffice to say it was all done in jest and never caused upset. When we moved up to Secondary School I found myself in the same class for most subjects as the “joker” from my junior school days. The ponytail had long gone but of course the song A Horse With No Name had well and truly become a part of our musical memory bank, so for the next six years I often found myself sitting in class, concentrating on a tricky maths or physics problem, suddenly realising that this song was being quietly hummed in the background for my benefit. Sadly we have now lost touch, but I swear that if our middle-aged selves met up again today, I would get a big smile, would be greeted with my old nickname, and given a few bars of A Horse With No Name. Funny how some things stick. 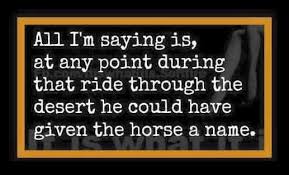 Like most people on the planet last year, we got hooked on the television series Breaking Bad set in Albuquerque, New Mexico. The plot and the acting were all absolutely first class and we binge-watched it over a period of a few weeks. I was constantly amazed how these big cities could have evolved in the middle of a desert, but for various strategic and economic reasons they have, and they continue to prosper. Of course whenever the main characters left the city and drove across the desert, most of the audience must have thought of the song A Horse With No Name and it was only a matter of time before it made a cameo appearance on the show. In Season 3, Episode 2, Walter White is singing along to the song on the radio when he is pulled over by the police for having a broken windshield. That incident is part of a much bigger story arc that I thoroughly recommend you dip into.

I noticed this week that Elton John has come out saying, in his opinion, the best year for music was 1971 and this song came along right at the end of that year. Looking back at lists of what was No. 1 in the Singles Chart however never substantiates such claims as that was also the year that gave us Grandad by Clive Dunn, Ernie by Benny Hill and Chirpy Chirpy Cheep Cheep by Middle of the Road. It’s usually the songs that reached the lower reaches of the charts that best stand the test of time. America reached No. 3 with their desert song and Elton himself only reached No. 7 that year with his wonderful Your Song written with Bernie Taupin.

So, the young songwriters of today should not be deterred as it seems that we just do not know which of their songs will still be around in the future – It only takes the fortuitous selection of a minor hit from the past, for inclusion in a film soundtrack, television show or advert, to turn them into the biggest selling records of all time. We have seen it happen before and we will see it happen again. In the meantime, I’m off to have a wallow in the music of 1971 – If it’s ok for Elton, it’s ok for me!

A Horse With No Name Lyrics
(Song by Dewey Bunnell)

I’ve been through the desert on a horse with no name
It felt good to be out of the rain
In the desert you can remember your name
‘Cause there ain’t no one for to give you no pain
La, la …

You see I’ve been through the desert on a horse with no name
It felt good to be out of the rain
In the desert you can remember your name
‘Cause there ain’t no one for to give you no pain
La, la …

You see I’ve been through the desert on a horse with no name
It felt good to be out of the rain
In the desert you can remember your name
‘Cause there ain’t no one for to give you no pain
La, la …