I seem to have stumbled upon “new wave” with my last couple of posts, writing first about The Clash and then Madness. I am still however not entirely sure how to define new wave which does seem to be a common problem. Although it started out with ties to late ’70s punk-rock, it eventually covered a myriad of sub-genres and the distinction between them leaves me confused and bewildered. Suffice to say it wasn’t “old wave” which up to that point had been rock, pop, country and soul.

The new wave artist that caused a fair bit of excitement when she first appeared on Thursday night’s Top Of The Pops in February 1978 was Debbie Harry, or Deborah as she preferred to be called. She was the lead singer with the band Blondie and this was the first time we had seen them perform the song Denis (pronounced Denee). Dressed in her “swimsuit” with what appeared to be her dad’s old tuxedo jacket casually thrown on top, she really made us sit up and take notice. She was stunningly beautiful with perfectly applied make-up but everything else was of a punk persuasion – Hair bleached a white blonde (it either had to be jet black or blonde if you were a girl) and odd combinations of black/red/white/striped clothes.

I was in my final year of high school and of course the topic of conversation the next day was Debbie Harry. I don’t know how it was done in those pre-internet days, but the shocking news got out quite early on that she was the grand old age of 32. Considering some of us probably had mothers who were not much older, I can see now how that would have been newsworthy. In the North of Scotland at that time (or anywhere?), our mothers just didn’t look like Debbie Harry. 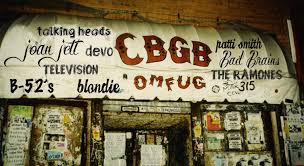 The difference in look was because these guys were American and had emerged from New York’s punk-rock scene whose music venue of choice was CBGBs based in Manhattan’s East Village. This was where The Ramones, Television, Patti Smith and Talking Heads had also cut their teeth, but possibly because Blondie had Debbie Harry, they quickly moved on to more mainstream success, especially with their top-selling album “Parallel Lines” from which they took their disco-influenced single, Heart of Glass.

Yet again Debbie looked stunning, despite the fact her long hair seemed to have been roughly chopped off with a blunt pair of scissors and then dragged through the proverbial hedge backwards. Her dress appeared to have been fashioned from a bit of old sackcloth then suspended loosely from one shoulder, but as ever she looked marvellous. The hits kept on coming for a few more years until, as is wont to happen, they started to fall out of favour with the record-buying public.

A bit of trivia about the song Denis – It was originally recorded by American doo-wop group Randy & the Rainbows in 1963 but back then was called Denise. Changing it to a song about a boy sounded better with a silent “s” so the boy became French. Debbie sang the last two verses in that language although a bit of poetic license was used it seems with grammar, but who cared – Debbie in her swimsuit could sing the telephone directory, badly, and still get away with it.

As someone who had their hair chopped off yesterday after having it long for over 20 years, I couldn’t help thinking that in life there are the Debbie Harrys, and then there are the rest of us. I would have loved to be able to carry off the sackcloth and mussed-up hair look back then and even now, but sadly I will continue to be a slave to hair products and styling techniques for the foreseeable future. As for Debbie, aged now 71, she still looks great and I will very magnanimously put that down to excellent genes. 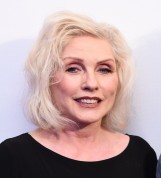 The law relating to freaky coincidences strikes again. I discovered after writing this post about Debbie Harry, that it happened to be her birthday today – Many happy returns D!