A joyful evening in the midst of all the political upheaval, as the band Madness have just been performing at this year’s Glastonbury Festival and I am reminded of how much I enjoyed them in the late ’70s when the 2 Tone label suddenly flooded the charts with great ska music, updated for a new generation. In those pre-internet days, pretty much the first and only time you would ever see a band perform would be on Thursday night’s Top Of The Pops. If you liked pop music it was a must-watch show and even in the sterile atmosphere of that little studio at television centre, with an often-bored looking audience being marshalled from stage to stage, you could really tell that these young lads were just a little bit special. Of course I didn’t realise at the time that The Prince they were singing about was in fact an early sixties Jamaican ska artist called Prince Buster, and that they had taken their name from one of his songs from that period.

The Prince by Madness:

As was wont to happen in those days, a new cultural movement emerged overnight and suddenly the soft rock and disco records that we were used to listening to seemed ridiculous and irrelevant, especially to young urban males. The 2 Tone label was set up in Coventry by Jerry Dammers of the Specials and very quickly ska/reggae/punk influenced records were being released by The Specials, Madness, The Beat and The Selector. The artwork for  the record sleeves was of course two tone, featuring a black and white checkerboard and a man wearing the ska uniform of black suit, white shirt, black tie, white socks, black loafers and of course, the very necessary pork pie hat. 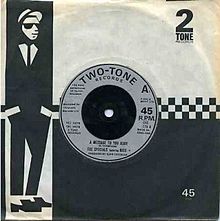 As for me, I was a student at the time and when we discovered that the 2 Tone Tour (has a nice ring to it) of late 1979 was coming to our city it was a no-brainer that we should go and see all these great acts live. It was going to be held in one of the big night-clubs usually frequented by weekend John/Joan Travoltas and this is where I made my first mistake – Because of the venue, I wore one of my “disco-dancing” outfits (wasn’t called clubbing in those days) complete with footless tights and shocking pink sparkly accessories. I don’t know how they managed it, but 99 percent of the audience that night were dressed in full “rude-boy” uniform complete with pork pie hat. This was the North of Scotland for goodness sake but all the charity shops within a 50 mile radius must have been totally raided of vintage clothing, and who knew that so many pork-pie hats could still have been in circulation. Yes, the shocking pink accessories stood out amongst all the black and white so in order to feel less conspicuous we quickly moved up to one of the balcony areas, to witness the phenomenon that was 2 Tone, from there.

The night started off with The Selector and frontwoman Pauline Black turned in an energetic performance culminating with their hit record On My Radio. Next up was Madness and of course we were treated to The Prince but the difference here was that they had Chas Smash whose role in the band was pretty much solely, dancer. Looking back at the clip now, this is exactly how he performed right through the set. He and Suggs made a great double act, a couple of likely lads from Camden Town doing something that was totally different.

I was sad to see that Chas Smash was not with the band at Glastonbury as he is “off doing solo projects” at the moment (they’ve had a falling out then). Something I have just got to the bottom of however is this – During the 1979 concert Chas at one point got down into the audience and it was hard to work out what he was doing. It looked as if he was in a fight, but then again the punches looked as if they were choreographed and part of his style of dancing. Turns out that it was commonplace for a skinhead element to come to the concerts somehow thinking that because of the style of clothing and haircuts, these bands had a similar mentality. Of course this could not have been further from the truth and if certain racist remarks were made, some of the band members got down into the audience to deal with it themselves – Young men and lots of testosterone.

The final band to perform that night were Coventry-based, 2 Tone founders, The Specials.  Not so much “nutty boys” but more politically informed which came through in their lyrics. Terry Hall, their lead singer, always had a bit of the Herman Munster look about him I felt which was probably intentional. Not possible to sing about the really serious issues of the day (Ghost Town) if you look like a teen-idol. We definitely witnessed something from music history that night however as the whole 2 Tone concept was short-lived and quickly morphed into something else.

As for Madness they are still out there doing their thing and although the dancing is no longer quite as energetic, they still make me smile. Aged only 18 in the clip, Suggs is now 55 and he got his grandchildren up on stage at Glastonbury at the end of their set to view the ocean of festival-goers. Could he have envisaged doing that back in 1979 when they were surreptitiously beating up unsavoury audience members? I doubt it very much, but I am very glad he did.

Buster, he sold the heat with a rock-steady beat

An earthquake is erupting, but not in Orange street
A ghost-dance is preparing, You got to help us with your feet
If you’re not in the mood to dance, step back, grab yourself a seat
This may not be uptown Jamaica, but we promise you a treat

Buster, bowl me over with your bogus dance, shuffle me off my feet
Even if I keep on runnin’, I’ll never get to Orange street

So I’ll say there’s nothin’ left to say, for the man who set the beat
So I’ll leave it up to you out there, to get him back on his feet

Buster, bowl me over with your bogus dance, shuffle me off my feet
Even if I’ll keep on runnin’, I’ll never get to Orange Street

2 thoughts on ““The Prince”, Madness and The 2 Tone Label”