Welcome to this occasional series where I am attempting a virtual journey around the 50 States of America in song – Suggestions for the next leg always welcome!

Well, I seem to have enjoyed my time in Vermont so much I stayed there for over a week! Time to move on again though and this time we’re heading down into Massachusetts (tricky to spell as was pointed out last time), named after its indigenous people. 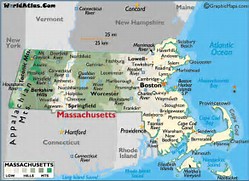 The random fact element of this post will have to be brief this time as more songs to get through than has been the case to date. Suffice to say it was where the Pilgrim Fathers settled after arriving on The Mayflower in 1620. They formed the Plymouth Colony and after a tough first winter, with the help of the local Wampanoag people, learnt how survive by growing corn. They then held a three day Thanksgiving event to celebrate their first harvest and that celebration of course still goes on today.

The island of Nantucket, more famous now for its beaches and holiday cottages, was home to the whaling trade back in the 18th century and the tale of Moby-Dick was set there. That infamous Tea Party occurred in Boston, but being British I’ll gloss over that one. I am reminded however that our own Alex Harvey put that story to song in 1976 with his version of The Boston Tea Party.

The Kennedy compound was at Hyannis Port in Massachusetts, presided over by dad Joe and mother Rose. Education is big business in Massachusetts and the city of Cambridge is home to both Harvard and the research institute, MIT. In popular culture the film Jaws was set there, mostly filmed on Martha’s Vineyard.

But which song to feature this time? I know that everyone expects it to be this one and it would be remiss of me not to include it, but not one of my favourite Bee Gee songs, and at the time of writing it they had never even been to Massachusetts. It was 1967, the year of The Summer of Love, and the hippies were all heading west to San Francisco so it felt as if here on the East Coast it was time to switch the lights out, as everyone had left. I remember well watching them perform this song on TOTP as a child but didn’t realise until later that the twins Robin and Maurice were aged only 17 at the time. So young but already so prolific.

Massachusetts by The Bee Gees:

Thanks go out again to my blogging buddies who offered up suggestions for songs associated with Massachusetts (links to their blogs on my sidebar). Rol came up with Feelin’ Massachusetts by the Juliana Hatfield Three and Massachusetts Avenue by Amanda Palmer. Both he and Lynchie came up with the Steely Dan song The Boston Rag, although to be fair Lynchie decided that he was allowed to call them simply The Dan as he had been a fan right from the beginning.

Before I get down to the actual featured song for this state, how would you like to come for a quick drink with me in a great bar I know called Cheers? It’s right here in Boston and for the guys who go there, it’s like their “blogosphere” – Nice to be in a place Where Everybody Knows Your Name.

So, lots of suggestions already, but for this post it could only really be the one that came in from both CC and C (no relation) – Roadrunner by Massachusetts natives Jonathan Richman and The Modern Lovers, first recorded in 1972 but a hit for them in 1977, when all of a sudden their proto-punk sound fitted the “times” perfectly. I don’t know what I was doing during my teenage years but it certainly doesn’t seem to have been listening to the lyrics of songs properly as until CC pointed out the whole Jonathan Richman/New England connection when I started this series, the Roadrunner I remembered best from those days was this one!

No matter, it has now clicked and the Massachusetts comedian John Hodgman came out saying that the song was, “Woven as deeply into the cultural landscape of Massachusetts as the Turnpike itself. It is the pulsing sound of the night and the future. It connects the midnight ride of Paul Revere with the dream of every Massachusetts teenager who has just gotten their license and is discovering the Freedom Trail that is Route 128 after the last movie lets out“.

Roadrunner by Jonathan Richman and The Modern Lovers:

This song came out the summer I turned 17 and after a few disastrous driving lessons with my dad (who in every other walk of life was patience personified), I gave up. The boys who were the same age however did not, and one by one they passed their driving tests and acquired “wheels”. We lived in the country and just like Jonathan Richman and his buddies, these local boys became weekend roadrunners. They had no particular place to go but the radio was on and they just wanted to hang out with friends and burn some rubber. Needless to say, every couple of years or so there was a tragic car crash and some of them didn’t make it. Fortunately all my close friends did get through that phase unscathed but the village cemetery is sadly littered with the graves of those who did not.

Next time we’ll travel into the smallest of the 50 states, Rhode Island. I do have a song idea for that one of my own but definitely “tenuous” so again I would be really grateful for any other suggestions connected in some way to that state (you know where the comments boxes are). We’re still in New England but are now getting ever closer to New York where I now realise there will have to be a Part 1 and a Part 2. Songs about Rhode Island – not so much. Songs about New York – where does it end?

One-two-three-four-five-six!
Roadrunner, roadrunner
Going faster miles an hour
Gonna drive past the Stop ‘n’ Shop
With the radio on
I’m in love with Massachusetts
And the neon when it’s cold outside
And the highway when it’s late at night
Got the radio on
I’m like the roadrunner

Said welcome to the spirit of 1956
Patient in the bushes next to ’57
The highway is your girlfriend as you go by quick
Suburban trees, suburban speed
And it smells like heaven, I say
Roadrunner once
Roadrunner twice
I’m in love with rock & roll and I’ll be out all night
Roadrunner
That’s right

10 thoughts on “An American Odyssey in Song: Massachusetts – Jonathan Richman & The Modern Lovers and “Roadrunner””