It may seem like we live in the sticks up here in the North of Scotland, but this year has certainly been a bumper season for tourism and there has been, proverbally, no room at the inn for most of the summer. Great for those who run hostelries and B&Bs, and great for those of us who like to have a bit of a buzz about the town, none more so than when there is a music festival and last weekend saw the last of the season.

First we had Belladrum’s Tartan Heart Festival which has already been written about (link here), then we had Groove Ness (Scotland’s biggest nightclub under the stars, apparently) and finally Jocktoberfest held at a local farm that specialises in the production of beer (oh how we laughed at that play on words – NOT). 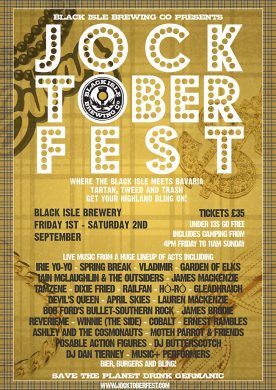 Darling daughter and her friends all headed off to the first festival at the beginning of August however a bad cold had been brewing in the days leading up to it and sadly, possibly due to the relentless rain that muddified the event, it resulted in a trip to A&E on the Sunday night. Fortunately the final festival was blessed with glorious weather and although the smallest of the three, it was the one that proved to be the most fun.

One upside to this summer of festival-going however has been that DD is now a big fan of Sister Sledge. They were on the bill at Belladrum for the second time although sadly this year without Joni who had passed away in March aged only 60. After writing about the passing of Walter Becker of Steely Dan last time I realised that it is now September and I still haven’t paid tribute to Joni and the contribution she and her sisters made to that body of work attributed to the disco genre. Sister Sledge always symbolised strong family values and their 1979 hit We Are Family did that with bells on.

We Are Family by Sister Sledge:

I would be lying if I said I’d ever been a massive fan of Sister Sledge but they were for many years a permanent fixture on chart rundowns, their other memorable hits being He’s the Greatest Dancer, Lost in Music and the 1985 UK No. 1 hit, Frankie. That particular song was taken from their Nile Rodgers produced album “When the Boys Meet the Girls” and was apparently about Frank Sinatra (although listening to the lyrics I find that hard to believe).

The reason I particularly remember that song of theirs is because I still have the NOW That’s What I Call Music album on which it appeared! It was only the 5th edition in that long series (of which we are now at number 97 I think) and it had been acquired for a flat party. Back in the mid ’80s, just like now, young people all became property owners by about the age of 25 – Oh no, that’s right, hardly anyone can even save enough for a deposit until about the age of 40 nowadays such has been the ridiculousness of houses becoming financial assets as opposed to homes over the last couple of decades. But anyway, pre-rant my point was going to be that in 1985 most of our friends had bought their own flats and wanted to keep them all pristine, so our large rented one became party central. Looking back at the tracks on this album we had the usual eclectic mix of all that would have been hogging the airwaves that summer from Sister Sledge to Simple Minds, from Duran Duran to The Damned. I wish I could remember how the party turned out but I can’t, although I do know that we often had nice policemen turning up at the door asking us to turn the music down (before returning to join in the fun once their shift was over).

Poor Joni (pictured above) should have been at our local music festival this summer but sadly passed away of natural causes before the event. Her son however was there in her place so the strong Sledge family values will continue it seems.

Until next time…., RIP Joni

We Are Family Lyrics
(Song by Bernard Edwards/Nile Rodgers)

All of the people around us to say
Can we be that close
Just let me state for the record
We’re giving love in a family dose, yeah

No we don’t get depressed
Here’s what we call our golden rule
Have faith in you and the things you do
You won’t go wrong, oh no
This is our family Jewel, yeah

8 thoughts on “Festivals, Sister Sledge and “We Are Family””