Well, this is odd. As regulars to this place know I left work last week after around 30 years with the same organisation – Not going to rush headlong into the next project yet, which could be all too easy, so until I start something new I find myself with plenty of spare time to sit down and partake in a little light blogging. Just as I do that however, it seems that inspiration has deserted me! Strange, as when I was a busy bee I had no shortage of inspiration and could often be seen bashing away on the laptop into the early hours of the morning.

But no, the problem this time is perhaps not a lack of inspiration but rather indecision as to what to write about next. I have a couple of series in progress and I have my trusty “blogging notebook” of ideas to refer to, but somehow neither of these routes work for me today so it’s time to search my digital database of tunes, to find something that relates to decision-making – Didn’t have to look far as immediately up popped Year Of Decision from 1974, by The Three Degrees. I haven’t featured anything from that stable of artists who went on to create the Philadelphia Sound before, so high time really. Also, my recent personal “big decision”, makes the lyrics very pertinent.

Year Of Decision by The Three Degrees:

Ok, so if you watched the clip, you had to endure that faux banter that used to happen as a prelude to introducing the acts on light entertainment shows such as this one (plus Cliff’s edge to edge embroidered tunic) but the three girls, Sheila Ferguson, Fayette Pinkney and Valerie Holiday certainly knew how to ply their trade back in the mid ’70s and those glamourous matching outfits, usually chiffon with strategically placed sequins, were their trademark. 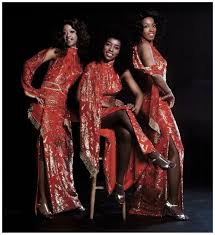 Philadelphia International Records was founded in 1971 by the very talented writer-producer duo Kenny Gamble and Leon Huff, along with collaborator Thom Bell.  It very much showcased a new genre of music based on the gospel, doo-wop, and soul music of the time. Throughout the 1970s the label released a string of worldwide hits which featured lavish orchestral instrumentation, heavy bass, and driving percussion. Other than The Three Degrees some of their most popular and best selling acts included The O’Jays, Harold Melvin & the Blue Notes, Teddy Pendergrass, Billy Paul, Patti LaBelle and Lou Rawls. Between 1971 and the early 1980s, the label sold over 170 gold and platinum records.

Watching shows like TOTP in the mid ’70s, rarely a week went by without an appearance by one of the aforementioned acts. The Three Degrees even become known for having our future king as a fan and after reaching No.1 in the UK Singles Chart with When Will I See You Again, they were well and truly propelled into the mainstream.

We’ve now seen a fine example of what the Philly Sound served up in the mid ’70s when it came to the ladies – What were the immaculately dressed men doing around that time? If you did watch the earlier clip, you will know that Gamble & Huff’s first big success was this 1972 song, Back Stabbers, performed by the O’Jays. A fine tune indeed and one I have always liked although apparently a warning to men that although their male friends might be all friendly to their faces, they secretly plan to steal their wives or girlfriends. A far fetched premise indeed (?) although after watching the current hit television drama Dr Foster, where the reviewers are lauding it for being so realistic, I am starting to realise that I must live in an alternate universe where relationships are concerned.

Back Stabbers by The O’Jays:

So, “What’s It All About?” – The move to a new, more home-based life has obviously robbed me of my decision-making abilities. As hobbies go, blogging is a relatively inexpensive one (as long as the technology holds out) so having not done much else over the last 20 months except work and blog, I have bought myself a few months of time before I have to make any more big decisions. Just as well as even deciding on a subject for this post was hard enough.

When I started this blog, I used to link each post to the previous one in some way but it might be more fun if I am set a challenge. I have put out a request like this once before and it worked well for me, so again, which song would logically follow on from either Year Of Decision or Back Stabbers for you? You know where the comments boxes are but please try and make it something I might have heard of!

If you’ve been holding back kind of slack

Now’s the time to get the things you need.
There ain’t no reason why you should be shy

People have died to set you free.
Oh we need ev’ry one to succeed

Please (come on come on and join us please

16 thoughts on “The O’Jays, The Three Degrees and a “Year Of Decision””