As regular visitors to this place know, the soap opera that is my life seems to get played out on these pages and this post is very much in that vein. Until this week I was a “new kitchen virgin” as somehow I have always been able to make do and mend with whatever kitchen was in place when we moved house. A few things happened towards the end of last year however that meant time was definitely up on our much-loved, brightly painted cabinets and obsolete appliances. (I used to be a great fan of the telly show Changing Rooms and threw myself into “upcycling”.)

The decision made, we proceeded to do the rounds of the many outlets who offer up fancy pants new kitchens. Anyone who replaces their kitchen often will be an old hand at all this but as newbies we were first of all aghast at just how much choice there is out there in terms of the various components (so many decisions to be made), and also of course shocked at how a set of cabinets costing around £4k leads to a grand total of about £12k after installation, but hey ho, god willing we won’t be doing it again for a very long time. With any luck, in another week or two we will end up with something as shown in this fine aerial plan done in minutes on the company’s wizard computer system. In the meantime a makeshift kitchen has been set up in the living room and the temperature, having plummeted of late, means that the garden is like one giant fridge/freezer so no problem keeping the milk fresh at all. 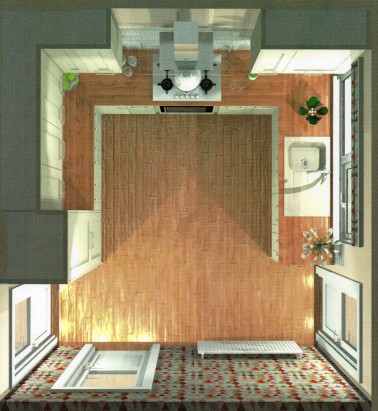 I read earlier this week that Donald Trump’s diet consists mainly of takeaways from McDonalds as he is wary of being poisoned from eating food prepared elsewhere (as if!) – Having given in to hunger the other night and gone out to pick up such fare, I am not convinced he’ll last the distance. Morgan Spurlock made the excellent film Super Size Me back in 2004 and all the doctors were shocked at just how much his health deteriorated in the 30 days he consumed nothing but McDonalds’ food. Fortunately for us this was a one-off that won’t be repeated for some time, but for people like Donald who appear to be frequent consumers, they need to watch this film. Might be better to stick to that original fast food pre-packed by Mother Nature – The humble banana.

Anyway, no-one wants to hear any more about my renovation project but of course it has got me thinking about songs that refer to kitchens in their titles. The first that came to mind was Martika’s Kitchen sung by none other than the lady herself, Martika. Although this song came along in the early ’90s, long after I had lost interest in what was happening in the current singles chart, I do remember her popping up several times on those Saturday morning TV shows made primarily for kids, but also watched by those of us who might have been slowly recovering from the night before. Looking back, the show I must have spotted her on could only have been Going Live which ran from 1987 to 1993 and was presented by Phillip (after The Broom Cupboard but before This Morning) Schofield and Blue Peter’s Sarah Greene.

Having just listened to this song again for the first time in decades, it turns out that it’s probably not the kind of ditty that should have been anywhere near a kid’s telly show and not even really the kind of fodder I usually feature here at WIAA. It was written by Prince (that explains a lot) as Martika was one of his many dark-haired female protégés who were around at that time. Somehow, unlike my good self, I don’t think Martika ever got an aerial plan of the kitchen she’s singing about in this song.

But what other songs have been written about honest to goodness kitchens and not ones that were euphemisms like the one Martika sang about. Well back in 1980, ahead of the release of his perennial Christmas hit Stop The Cavalry, Jona Lewie gave us You’ll Always Find Me In The Kitchen At Parties. Unlike in the early ’90s when I seemed to be busy watching telly whilst nursing hangovers, at the start of the ’80s I was still keeping a close eye on what was in the charts and I remember this song well. Jona Lewie, I have just discovered, used to go by the name Terry Dactyl (as in pterodactyl, hmm…) and along with his backing band the Dinosaurs (what came first, the dinosaur or the terry dactyl?) had a hit in 1972 with the song Seaside Shuffle. Don’t know if it’s just me, but it has a definite Mungo Jerry sound to it.

You’ll Always Find Me In The Kitchen At Parties by Jona Lewis:

An interesting snippet about this song is that it was the first time Kirsty MacColl sang as a backing singer for Stiff Records. The daughter of folk singer Ewan MacColl, Kirsty went on to record several pop hits from the early ’80s to the mid ’90s but is of course best remembered for the Pogues song Fairytale of New York on which she dueted with Shane MacGowan. Kirsty sadly died in 2000 as a result of a tragic accident whilst on holiday in Mexico.

So, “What’s It All About?” – Like Jona Lewie I have done my fair share of spending time in the kitchen at parties. It can be a tough gig breezing it out with people you barely know in the main venue, so to retreat with a few others to the more relaxed environment of the kitchen can be just the ticket. I hope my new kitchen (once we manage to source a table that fits in properly) becomes a relaxed hub where people can hang out during parties should they wish. Whether I will actually have the time or energy to host any parties in the near future is another topic, for another day, but in the meantime I’m just glad for once that the temperatures are very low indeed as I’m about to pop out to the giant fridge that is our garden, for a cold beer and a pint of milk!

I’m no good at chatting up and always get rebuffed
Enough to drive a man to drink, I don’t do no washing up
I always reached the stuff piled up, piled up in the sink

But you will always find him in the kitchen at parties

Me and my girlfriend we argued and she ran away from home
She must have found somebody new and now I’m all alone
Living on my own, what am I supposed to do?

Then I met this debutante, I said that I like new wave rock
She was into French cuisine but I ain’t no Cordon Bleu
This was at some do in Palmer’s Green, I had no luck with her

At last I met a pretty girl, she laughed and talked with me
We both walked out of the kitchen and danced in a new way

15 thoughts on “Martika, Jona Lewie and “You’ll Always Find Me In The Kitchen At Parties””