Well, there was a bit of “throwing down of gauntlets” going on around here last time and the upshot is that I now have a couple of posts to write as a result. Whilst I mull over how best to tackle those posts, I thought it would be a great opportunity to share another picture from our recent trip to Edinburgh. A suit of armour featured, and at the time I wasn’t sure how to shoehorn it in, but now, with all this talk of gauntlets, I think I’ve found the perfect time.

First though, in the comments boxes last time, C over at Sun Dried Sparrows mentioned that she did love that ancient phrase, and would be interested in its origin. Basically, it seems 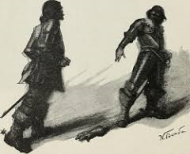 gauntlets are those long thick gloves which protect your hands, wrists, and forearms and back in medieval times, a knight would throw down one of his metal gauntlets if challenging another knight to a duel. If this second knight picked it up, he was in effect accepting the challenge. Nowadays, if you throw down the gauntlet, you simply do or say something that challenges someone to take action (much less life-threatening).

But back to my suit of armour picture. One of the reasons for our trip to Edinburgh was because Mr WIAA wanted to visit an aunt and uncle who had recently moved to a new house. Rather than downsizing when they reached their eighties, the couple in question seem to have upsized, but we did love our visit and admired the many artefacts which were on display, collected over the course of a lifetime. One of the more recent acquisitions was a suit of armour which now resides in their hall, complete with…, yes you guessed it – gauntlets! 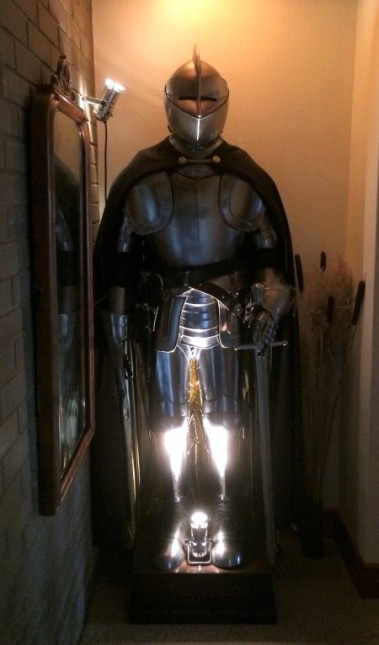 The wedding suit of armour 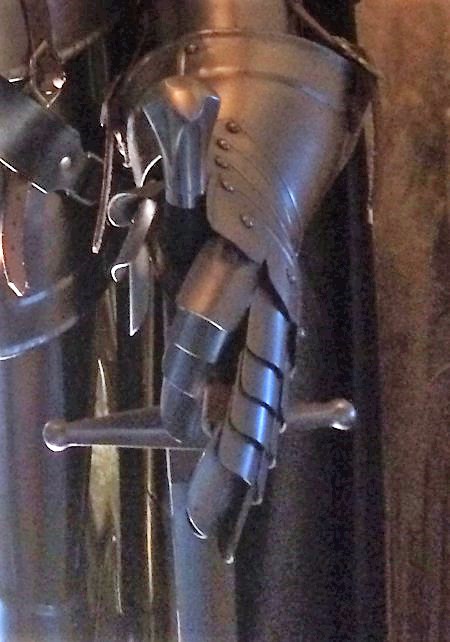 I had promised myself I wouldn’t write any more “wedding posts” as not overly popular with my readership it seems, but a few years ago, Mr WIAA’s cousin decided to get himself married in a suit of armour! It’s the bride’s day they always say, but in this case it was definitely a 50/50 split. The upshot however was that after the wedding they didn’t have space for the suit in the marital home, so it has, along with all sorts of other ephemera, gone to reside at his parent’s abode.

But this is supposed to be a music blog so why am I wittering on about suits of armour? Well I’ve not mentioned this before, but we actually used to have a bona fide rock band in the family and the aforementioned cousin was very much part of it all. As a boy Mr WIAA spent most of his summers with his two cousins, and all they ever wanted to do when they grew up was to play music and join a band. Enter Kiss of the Gypsy.

KOTG were formed in Lancashire in the late ’80s and were described as a blues-based hard rock band. In 1991 they were signed to Atlantic Records USA and their first eponymously named album was released in 1992. Their first single, Whatever It Takes, reached No. 4 in the Rock Charts and was Single of the Week in Kerrang! magazine. Although this is not a great quality clip, it shows that they did reach the dizzy heights of filming in LA with glamourous blondes (neither of the cousins by the way is the lead singer).

Whatever It Takes by Kiss of the Gypsy:

Despite receiving critical acclaim for this first album it seems they were the victims of bad timing, as their style of rock music was coming to an end in the early ’90s and grunge was taking over. After the UK branch of their record company folded, they lost their record deal and the second album was never released. They are still however fondly remembered by those in the know, and of course when one of the brothers got married, it was always going to be quite a unique affair what with suits of armour, a drum kit for guests to autograph, vinyl place settings and a “sign of the horns” wedding cake. 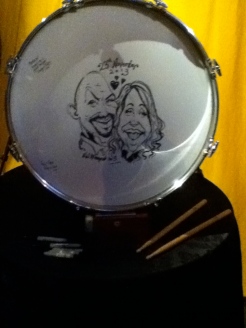 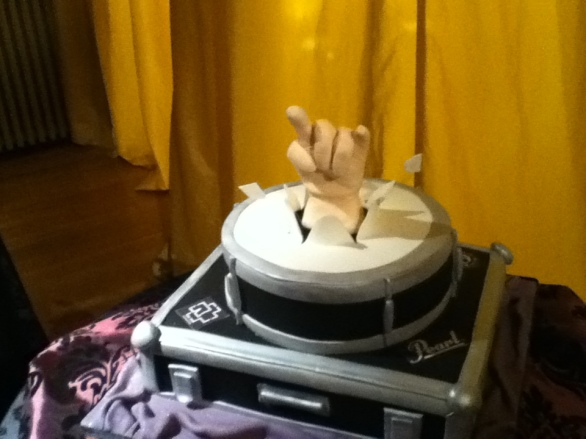 As for me, at the time this kind of music was about as far from what I was familiar with as is possible, but of course not long after Mr WIAA and I became a couple, I got the chance to meet the brothers. As luck would have it I worked in an office quite near Mr WIAA’s parents’ house so I was to drop by after work to be introduced to this new branch of the family. I kind of knew about KOTG but didn’t really know much about the sub-genre of rock music called hair metal (although they wouldn’t take kindly to me calling it that probably), so when I did meet them, all I could think of was, “What a lot of hair!”.

They are of course now both bald as coots, and two of the loveliest guys you could ever meet, but back then it was a tad disconcerting to be standing in your future in-laws’ suburban sitting room, chatting with what looked like members of Guns N’ Roses. It was also really bad luck that I had come straight from work that day in an office-y type outfit which was about as frumpy as they come. I must have been having one of those days when inspiration left me, so had teamed up a tweed skirt with a old “going-out” blouse – Not up to my usual standard and although he didn’t say it at the time, I’m sure Mr WIAA had hoped I’d change before coming over. All water under the bridge now of course, and so many years ago, but definitely a first meeting I’ll not forget in a hurry.

I shall leave you with another of the tracks from their album which is more of a power ballad, and one I like a lot. Not many of us ever get to live the dream, even for a short while, but these lads from Lancashire did – Something to tell the grandchildren about, although I have a feeling they would scarcely believe them!

Take This Old Heart by Kiss of the Gypsy:

Lets fly away now on the wings of wonder
Touch me again
The cold breath of winter, hold me in your arms
Shield me again
Like the shadow of night I’ll haunt you
Behind me wherever you may go
Like a kiss on the wind I’ll find you
No matter how far you wish to go….

You can ride on my shoulders
Through the skies like an eagle I’ll carry you
Like a rock I’ll stand and support you
I’ll be earth between you feet, I will be here to hold on to
If you ever grow tired hold on to me….

9 thoughts on “Suits of Armour, Kiss of the Gypsy and “Whatever It Takes””