Another week, another picture post. I’m not sure how this happens, but every time I visit London I seem to be faced with a heatwave. Temperatures on Saturday hit 35 degrees at one point, but luckily for me it was a bit more manageable on the Friday, as that was the day I was to meet up with long-term blogging buddy C, from Sun Dried Sparrows. But in the anonymous world of music blogging, how would we recognise each other? Why, with mock-ups of our Swedey McSwedeface “first album” sleeves of course!

Having successfully met at the planned rendezvous, and not made any major blunders mistaking total strangers for our blogging pals, central London was ours to explore, punctuated of course with lengthy stops for coffee, lunch and drinks of the non-alcoholic nature (we are both lightweights nowadays it seems).

St Paul’s from the rear (or is it the front?)

Somehow, in a short space of time, we managed to visit the Tate Modern, cross the Millennium Bridge to St Paul’s, have a boat trip down to Westminster (to give them a few tips on how to run things), pass by Downing Street and Whitehall, catch the wildlife in St James’s Park, all before heading back to Trafalgar Square to find our respective lines on the Underground.

As suspected, even with a blogging buddy whom until this point I had only “spoken to” online, the conversation flowed freely as we already knew each other so well from our respective blogs. I am well-known around here for over-sharing but maybe that’s a good thing as we were already like old pals. A fine day was, I’m pretty sure, had by all and I for one hope we’ll be able to do it again sometime.

Downing Street – Who will be it’s newest resident? 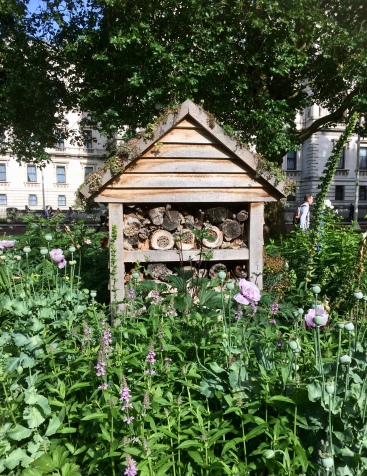 In the Swiss Cottage garden at St James’s Park

The Pelicans of St James’s Park

Luckily for me, I have a wide network of old friends and ex-flatmates I somehow have recently become reacquainted with via social media. Yes I know it can be evil at times, but it can also be useful, as one of these old friends lives in Wimbledon and she was happy to put me up (or was it put up with me) for the weekend.

On the Saturday, we were to meet up with an extended group and head into town to catch the new Dior Exhibition at the V&A. It was spectacular indeed and is to be recommended. The Dior name is internationally renowned but the man himself died young at the age of 51, having only run his “house” for 9 years. Luckily, since 1956, a steady stream of visionary designers such as Yves St Laurent and John Galliano have taken over as Creative Director for the house, leaving us with gowns that are more works of art than items of clothing. Our favourite pieces however were those created by the current in-house designer Maria Grazia Chiuri. Stunningly beautiful.

Inspiration from around the world 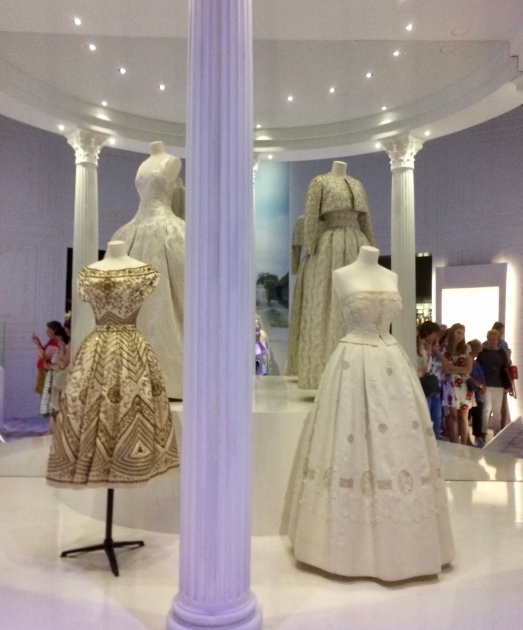 The House of Dior

But what is it I usually say at this point – Oh yes, this is supposed to be a music blog so where is the song? I have veered far off topic on this one I think, but I really wanted to record the events of a weekend which would never have happened had I not decided to start revisiting the tracks of my years just over three years ago. I certainly hadn’t expected to make such good friends out of this blogging malarkey but here we are. I can confirm that C is just as lovely as you would expect from her blog.

One of my abiding memories of the weekend however is the heat. The local Tube Station on Saturday was closed, probably getting a bit of last minute maintenance before the onslaught of visitors who will be using it over the next fortnight whilst that very famous Tennis Tournament is in session. We had to bus it into London, and then bus it home again, in temperatures a lady from the Highlands of Scotland is just not used to. When I got off the bus late afternoon on Saturday, my trousers were sticking to my legs, courtesy of London Transport’s moquette seat upholstery. Yes, it was a hot town and the back of my neck was getting dirty and gritty. Cue the Lovin’ Spoonful and a song from over 50 years ago, Summer In The City written by John Sebastian and still ranked as one of the 500 Greatest Songs of All Time.

Summer In The City by The Lovin’ Spoonful:

I did tell C I would probably write a post about our meet-up but keep it low key. Not sure if she’ll see this as low key at all, but my thinking is everyone is either at Glastonbury, or watching Glastonbury on telly this weekend, so this post will slip under the radar. I myself have watched much of the footage this afternoon, and really enjoyed the Pyramid Stage performance last night by The Killers. I don’t think it was quite as hot down on Worthy Farm as in Central London on Saturday, but I did hear the showers had to be switched off at one point to conserve water for thirsty festival goers. It is on my bucket list to go one year, as I never have, but considering my distress at merely traversing London in the heat I’m not sure how I would cope with both the camping and the lack of showers. Then again, three years ago I would never have thought I would travel to the other end of the country to meet a “virtual friend” met via this place, so it just goes to show, you never can tell.

Hot town, summer in the city
Back of my neck getting dirty and gritty
Been down, isn’t it a pity
Doesn’t seem to be a shadow in the city

All around, people looking half dead
Walking on the sidewalk, hotter than a match head

Cool town, evening in the city
Dressing so fine and looking so pretty
Cool cat, looking for a kitty
Gonna look in every corner of the city
Till I’m wheezing like a bus stop
Running up the stairs, gonna meet you on the rooftop

22 thoughts on “London Calling, “Summer In The City” and A (Mini) Bloggers’ Summit”