I had fully intended to return to blogging this weekend after a particularly busy three weeks. There was a lot to write about and many pictures to share – My current propensity to write negative posts could perhaps be assuaged.

Two weeks ago I went to Bergen in Norway with my best friend. For the third year in a row we managed to fit in an October City Break and lord knows we both deserved it, having worked so hard over the summer months both trying to earn the spondulicks and support our families. Luck was on our side and we had three wonderful days of dry weather when the sun shone. A cruise along the nearby fjords was a highlight of the trip and for the first time in years I got that sense of wonderment that comes from being amongst stunning scenery so unlike anything I am used to. 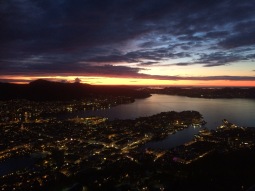 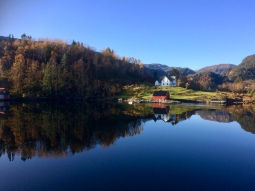 As ever, because of modern technology, there was a live hotline to Scotland whilst we were away, and although we knew my friend’s 18-year-old daughter was currently struggling and a bit troubled, we thought all would come right in the end. Sadly, on Friday afternoon, she took her own life. I have no idea what will go on the Death Certificate but in reality it should state Death by Social Media. It is hard for us of a certain age to comprehend cyber-bullying, but it is very real, and on top of all the other pressures an 18-year-old has to face in today’s world, it can be the straw that breaks the camel’s back.

I will share a picture of Holly as I will remember her. She was a member of the local pipe band and was usually the person called upon to perform a bagpipe solo, should it be required at some civic event. She was a great sportswoman and a member of the Scotland squad in her chosen discipline. So much to live for, yet probably as a result of her success, and those who were jealous of that success, all now a dreadful waste.

So, another gloomy post from me but I needed to explain my absence around here and warn you I am not in the best frame of mind for blogging at the moment so may well be largely absent for a while yet. We will all try to support my friend and her family, but the one thing they want more than anything else, we can’t give them – To have their daughter back.

It has often been mentioned around here that social media can be ugly and vile but how can we impress on those youngsters (and those in certain sectors of the press) that what they say about people whilst sitting in the comfort of their own homes, can have a profound and sometimes fatal impact. We now have the first generation reaching adulthood who have never known a world without social media, and we are losing them fast. I know that we could have so easily lost DD at the same age, and many of my friends feel the same in relation to their own children, which is why it is hitting us all so hard.

I invariably was thinking of sharing something by Norwegian band a-ha in this post as it was supposed to be all about my trip to Bergen. It hasn’t turned out that way, but I still want to share this song, The Sun Always Shines On TV. Pål Waaktaar, the writer of the song, is quoted as saying: “The Sun Always Shines On TV was written on one of those down days. Mags and I were in a hotel watching English television on a rainy day and the guy announcing the program says, ‘It’s a rainy day but, as ever, the sun always shines on TV.’ The song is about the power of television and the way television presents life.”

They didn’t have social media when the song was written back in 1985, but the sentiment remains the same in today’s world – The sun always shines on Facebook, Instagram, Snapchat and so on. It looks as if your friends’ lives are full of holidays, perfect relationships, glowing skin, stylish hair & clothes and nights out on the town. Thankfully many of us are waking up to the unreality of it all and even risk FOMO in order to tend our mental health. Not so easy if you are a teen however and sadly parental influence has to take a back seat during those tricky teenage years, to be replaced by often unstablising peer-group influence.

The Sun Always Shines On T.V. by a-ha:

Not much more to say really. Apologies if I have not visited the comments boxes of the various blogs I follow for a while but hopefully you will understand why. When I started this blog at the start of 2016 life was a lot less ugly, divisive, dangerous and cruel than it seems to be only four years later. A lot of the blame lands at the feet of he who called the fateful EU Referendum, but of course much, much more to it than that. We are living through strange and uncertain times so all the more reason to hold on tight to family and friends – Keep them close and do whatever it takes to protect them.

Well, I didn’t put in an appearance around here at all last weekend, so going to put together a web-diary kind of affair so as to not lose momentum. The main reason why I was MIA last weekend was because I went “live” with my new venture called….

Yes, Alyson’s Highland Adventures is now taking bookings, so it’s been all systems go on getting everything ready for visitors to our neck of the woods. In terms of timing, it has also coincided with the sale of my mum’s flat, which has to be empty by next weekend – What the heck do you do with a lifetimes’ worth of possessions and memorabilia? I suspect a lot of it is going to end up in my loft, and possibly the loft of the Highland Hideaway, but a bit of a sad business. On the upside, my mum barely remembers she had a flat, and is still happy in her new care home, so not too upsetting for her that it had to be sold. I am finding however that my visits to the care home are having to be a bit more plentiful and as unexpected as possible – The care of our old folk is down to people who barely know them, and especially in the case of residents with dementia, they really need an advocate to fight their corner.

On top of all that, the deadline was yesterday for my college course’s first assessment of the semester; and there has been a flurry of activity with Mr WIAA’s business which I administer; and I had to trawl through my blog this week to weed out any reference to he who shall no longer be named, after watching the troubling documentary Leaving Neverland. Not going to say any more about the doc in this post, but suffice to say, whatever the truth behind it all, I am now well and truly done with him.

To cleanse the palate we need a great tune, and of course when mentioning AHA, I am immediately reminded of that great Norwegian export of the late ’80s, a-ha. The video to accompany their song Take On Me was probably one of the best of the decade, and it was lovely to watch it again earlier this week. The boys sport mullets and stonewashed denim, but their look is quite toned down, and doesn’t seem as dated as that adopted by many other ’80s bands. The generic Marty McFly look – Maybe why the Back To The Future movies are still so popular?

Although written a few years previously, it wasn’t until a new video was commissioned in 1985, that the song struck gold. It didn’t do any harm either that lead singer Morten Harket was, to quote the record company executive at the time, “one of the best-looking men in the world.” I remember having a work colleague a few years ago who still had a picture of Morten in the locket she used to wear regularly around her neck. She had been happily married for years, but the locket was a hangover from her teenage years, so Morten remained in place!

Strangely enough, the song popped up over at Rol’s place earlier this week as Weezer have included it on their new covers album (another great video for their version). Also, after visiting CC’s Double Digits series this morning, I had to sort my digital database by artist – What immediately starts to play (if not set on shuffle mode)? Why A-ha of course, with Take On Me. A nice bit of synchronicity.

So, “What’s It All About?” – Life is a rollercoaster (as little Ronan Keating used to sing) and I have had quite a ride over the last couple of years, but it’s really looking as if a new routine is on the cards, so looking forward to that a lot.

As for AHA (Alyson’s Highland Adventures), as you’ve probably guessed, that’s my blogging name for the new venture, so you won’t find it by googling. Should anyone want to find out a bit more however, the Contact Me button is at the top of the page.

Talking away
I don’t know what I’m to say
I’ll say it anyway
Today is another day to find you
Shying away
I’ll be coming for your love. OK?

So needless to say
Of odds and ends
But I’ll be stumbling away
Slowly learning that life is OK.
Say after me,
“It’s no better to be safe than sorry.”

Oh, things that you say. Yeah.
Is it life or just to play my worries away?
You’re all the things I’ve got to remember
You’re shying away
I’ll be coming for you anyway

As Alan Partridge popped up at the top of this post, can I ask, is it just me or is the new series on BBC1 a bit of a disappointment? I have been watching, but not quite as good as I was expecting. Will stick with it though and see how it evolves.

I also mentioned the sorting of my digital database by artist. Had I sorted it by song, at the top of the list would have been one by he who shall not be named and his brothers. I think it’s obvious which song it is, but sadly, it will now have to go.

Join 389 other followers
Follow What's It All About? on WordPress.com