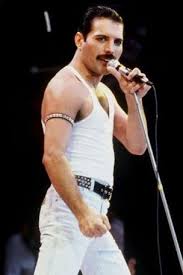 Well, my stats are booming and all because of this particular post, written right at the start of my blogging career. Regular visitors will know I’ve had a bit of a cinema-fest going on of late before life starts to get really busy again, and this week I managed to catch the Freddie Mercury biopic, Bohemian Rhapsody.

It hasn’t received universally fantastic reviews, but for those of us who enjoy rock and pop folklore, it is I feel, a must-see film. Rami Malek played Freddie brilliantly I thought and having to act with those teeth must have been a challenge in itself. (Freddie was apparently born with an extra 4 incisors but forewent the intervention of a dentist in case it affected his voice.) We got a great insight into the early days of Queen and the background to the making of those epic records. The film ends with footage of the Live Aid concert where they pretty much stole the show (and formed the basis for this post). The best way to go I think. We leave the cinema with a smile on our faces, remembering Farrokh Bulsara at his prime, just as he would have wanted.

I wrote yesterday about the Celtic rock band Runrig and how their rousing live performances induce mass participation, especially when at home in Scotland.

The performance most people my age will remember as being one of the finest ever to take place however, was when Queen arrived on stage for their segment of the Live Aid Concert, held on July the 13th, 1985. I still remember that day well and who knew before the concert began that this would be a seminal performance. To see and hear all 72,000 people in Wembley Stadium sing along with Freddie Mercury to Radio Ga Ga was a landmark moment in pop history. His a cappella section at the end of the song, featuring his amazing vocal range and ability to work the crowd, came to be known as “the note heard round the world”.

Always a lot of talk in my little corner of the blogosphere relating to what constitutes a guilty pleasure – In song terms of course. After a fair bit of discussion, the upshot always is that there really should be no guilty pleasure tag, as some songs were specifically written to be short-lived bursts of pure bubble-gum pop. Of course we do all get a bit fed up when there is such a plethora of these songs around that they distract and detract from all the other good stuff (e.g. the machine that was SAW in the late ‘80s) but it happens from time to time, always has, and always will.

I feel as if the song I am going to feature today should come under the guilty pleasure tag, but as we are no longer going to use that term I will instead just explain how it came to mind. First of all, we had a wedding to attend yesterday and much of the week was spent preparing for it. When the song Wedding Bell Blues by The 5th Dimension came on the radio one afternoon, I was therefore already tuned into all things “wedding-y”. Secondly, as explained in my last post, of late I seem to have found myself continually gravitating towards songs from the late ‘60s, which I find bizarre as from a time when I was still a little kid. Finally, just as my fellow bloggers felt a tad uneasy about their appreciation of Jason Donovan, I felt a little uneasy at my appreciation of The 5th Dimension but in no time at all I was dancing around the room and made a sneaky little purchase on iTunes.

What I find fascinating about the ‘60s is that during that decade, in the wink of an eye, we moved from boy and girl bands, dressed very smartly in identical matching outfits and very rigid hairstyles to the wild abandon that constituted the hippy counterculture. The 5th Dimension were probably best-known for the song medley Aquarius/Let the Sun Shine In, from the stage musical Hair. Hard to believe now that full-scale nudity even came to Scotland in the form of a touring production of the show in 1969 – I clearly remember my parents discussing it, and unbelievably they didn’t even seem that shocked by the concept, but then again they had lived through a war (and not the Vietnam one so integral to the plotline of the show) so perhaps they could adapt to change in a fast-moving world more quickly than we perhaps do now?

But back to Wedding Bell Blues, it is a song that was written and originally recorded by Laura Nyro in 1966 but only really became a big hit when covered by The 5th Dimension in 1969. The song is written from the perspective of a woman whose boyfriend has not yet proposed to her, and she wonders, “Am I ever gonna see my wedding day?” The woman obviously adores her man but there is definitely a theme of frustration going on there as well.

As it happens, other than the word “wedding” being in the title, the theme of this song was not relevant to yesterday’s event at all as the couple getting married have been together for quite some time and were both equally as excited about tying the knot. For the second time in two months we were invited because we are friends of the parents – Yes we have now been to all our own friends’ weddings and there have been quite a few “second marriage” weddings. In these cases the couple in question are usually a bit more mature, so can spend a fair bit of money on their big day and it becomes quite a lavish and extravagant affair. Now we are seeing our friends’ children getting married and these are turning out to be the most enjoyable. There is something really pure and satisfying about seeing two local youngsters, you have known since they were kids, set out on that journey.

I have mentioned before in this blog that part of the reason I seem to have omitted listening to song lyrics in my youth, was because my relationship with music was often more about how it made me feel, and if it made me want to dance I most definitely did. There is a bit of a problem with dancing however in that once you reach a certain age, the chances to indulge your passion are severely limited. No-one wants to be the oldest swinger in town so it is only at events like weddings that the dancing shoes get an airing.

As it turns out, because it was quite a simple, local wedding with a DJ playing songs requested by the guests, there was a definite joie de vivre in the air last night and unlike with some of the very grand weddings we have attended (think the Andie MacDowell one from Four Weddings) where you really need your wits about you in order to remember all the complex steps for certain obscure Scottish Country dances, last night was all about having fun. We had party dances, a few golden oldies and even a bit of Shang-a-Lang by The Bay City Rollers (always a crowd pleaser here in Scotland so not even a hint of the guilty pleasure tag there).

Now as you may have guessed, hubby and I have been known to put on a bit of a show at such affairs, and last night was no exception. You can kind of read the crowd at certain points in the course of the evening and sometimes a record comes on where you can just “flick the switch” and turn in a bit of a performance – We are not talking Strictly Come Dancing level here but it does usually clear the floor and we are given the space to “do our thing”. Because we were a bit of an unknown entity to most of the guests who had not seen this happen before, it was not really seen as showboating at all, and they really did seem to enjoy it – And there was my downfall! One woman in particular (a Miranda Hart lookalike) raved about how great we were to such an extent I got a bit big-headed, and when the very unlikely choice of Bohemian Rhapsody came on I decided to embark on the full six minute “re-enactment of the lyrics” dance, with hubby in tow. Despite the fact I have had my longish hair cut quite short of late, and hubby is now on the number 2 hair clippers, we even did the head-banging scene as last seen in Garth’s car in Wayne’s World. Again the crowd were entertained but today I am suffering both a slight hangover and the worst sort of cringe moment, as I replay the horror in my head of my good self lying on the floor in my best wedding frock, right at the song’s denouement.

So, “What’s It All About?” – I think it’s about being true to yourself and not feeling guilty about enjoying certain types of music just in case your cool friends might disown you. It’s also about getting out there and doing your thing on the dancefloor for as long as physically possible – My knees may be suffering today but the adrenaline rush made it all worthwhile. Note to self however, the days of Bohemian Rhapsody showdances should probably be behind me now, although my daughter, who had to be escorted home in tears last time she witnessed us perform aforementioned showdance, is now a bit older and was actually quite proud of us when we recounted the tale – And in my book, that must stand for something.

As for me I’m off to tend to my aching, but hopefully soon to recover, limbs. Until next time – Keep on dancing!

Bill I love you so
I always will
I look at you and see
the passion eyes of May
Oh but am I ever gonna see
my wedding day?
Oh I was on your side Bill
when you were losin’
I’d never scheme or lie Bill
There’s been no foolin’
but kisses and love won’t carry me
till you marry me Bill

Bill I love you so
I always will
and in your voice I hear
a choir of carousels
Oh but am I ever gonna hear
my wedding bells?
I was the one came runnin’
when you were lonely
I haven’t lived one day
not loving you only
but kisses and love won’t carry me
till you marry me Bill