Well, it’s been a bit of a cataclysmic week here in the UK. On December the 12th we had a General Election and by the 13th we woke up to the news that the Tory party had secured a “stonking” majority at Westminster. They certainly didn’t secure a stonking majority here in Scotland, but they never do, so no change there. As I often say around here, we are living through strange times and I don’t believe for a minute it will be all plain sailing for the new government heading into 2020 – Things had come to a head however and it seems Brexit fatigue had taken over the country which is a great shame, as I have a terrible feeling that many of those who voted Tory for the very first time last Thursday, will be the ones who suffer most over the next five years.

Anyway, we all need a break from the politics and before the end of the weekend I just wanted to share this picture of the full moon which lit up our skies on election night. It’s not a great example in terms of quality, but it was the one I managed to take on my phone when heading back to the house after a trip to the hairdressers. When things are looking a bit glum, a trip to your local salon is sometimes just the tonic required and I am happy to report my tresses have now been lit up too, just in time for Christmas.

We’ve been here before in this blog with a December Cold Moon post both in 2017 and 2018, but it’s the series that just keeps on giving as no two years are ever the same. It seems to be a bit of an optical illusion but the closer to the horizon the moon is, the larger it appears, and by golly that moon on the 12th of December certainly looked large. The politicians may come and go but thankfully the moon still waxes and wanes every 29 and a half days, which is a pleasant constant in a topsy turvy world.

I’m rapidly running out of songs I am familiar with for this series but here’s one written by many a fan’s favourite Beatle, George Harrison. I’m pretty sure it was put forward as a suggestion early on in this series, but it’s not put in an appearance yet, so now would be a good time. Here Comes The Moon was written by George whilst on holiday in Hawaii in February 1978. He came up with several songs for his album George Harrison there, drawing inspiration from his surroundings. He apparently recalled seeing marvellous sunsets and on one particular occasion, the full moon was coming up just as the sun was going down which totally bowled him over (but the bowling over was possibly more down to the effect of certain hallucinogenic substances!).

As for George, he was the youngest of the Beatles and a mere lad of 15 when he first joined John and Paul in their skiffle group The Quarrymen. He was also sometimes called “the quiet Beatle” which is perhaps why so many warmed to him the most. He died far too young in 2001 at the age of 58 but has left us a large body of solo material as well as all that he recorded with the Beatles and Traveling Wilburys.

I for one will have to investigate further as I have become quite smitten by this uncomplicated song, written purely about the moment, and not intended as a metaphor for life in any way. Perhaps we should finish off with something from George himself, that gentle soul whose last words were apparently, “Love one another”. 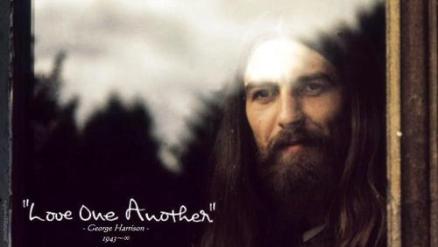 Last month I wrote a post (link here) about that amazing full moon we in the UK were all witness to. Having discovered that all full moons have a name, generally having come from the Native Americans who very much used the moon’s cycle as their calendar, I decided to embark on a series of “moon posts” to coincide with whenever a new one appears in our skies. Last night, despite the fact there had been solid cloud cover all day, I managed to witness the Cold Moon, so-called because it occurs at that time of the year when the cold grip of winter really starts to take hold. I tried very hard to get a good shot of it both with my phone and camera, but not easy, so here is the best I could come up with – My Cold Moon as seen in the Highlands of Scotland. 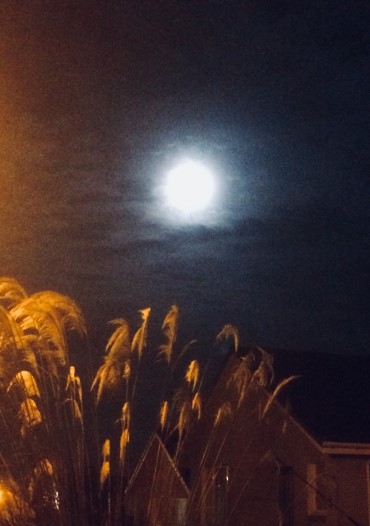 The next full moon will occur in January, so as this is my last lunar offering of 2017 I am going to feature a song by an artist who sadly left us earlier this year and whom I have been remiss in not mentioning until now. I am talking about Al Jarreau who despite having had an incredibly long career as a jazz performer will, for me, always be remembered as the guy who sang the “Moonlighting” Theme. Al started out in 1968 and during his lengthy career received a total of seven Grammy Awards and was nominated for over a dozen more. He is perhaps best known for his 1981 album “Breakin’ Away” but passed away back in February this year at the age of 76, just two days after announcing his retirement.

Moonlighting was the American comedy-drama television series, set in the offices of a private detective agency, that ran for four years in the late 1980s. It was must watch telly in the flat I shared with my best friends and even when we all started to move out and go our separate ways, it was always a great excuse for a get-together back at the mothership!

The show made a star out of Bruce Willis and re-launched the career of Cybill Shepherd. The relationship between their characters, David and Maddie, was of course one of those “will they, won’t they” ones but naturally once they did, the magic ended. Still included in most lists of the best TV couples of all time however. Bruce and Cybill aka David and Maddie

Next month’s full moon will be called the Wolf Moon so I shall return at the start of January with another lunar song title. A bit of a quirk next month however in that we will also have a Blue Moon. Doesn’t happen often (thus the name) but as all full moons occur every 29.5 days we will have one on the 2nd and the 31st (just snuck in there at the end of the month). Plenty of song choices for blue moons but will have to have a think about which song would be most suitable for a wolf moon. Bob Seger and his Silver Bullet Band immediately comes to mind but we’ll see!

Until next time…. RIP Al Jarreau

Some walk by night
Some fly by day
Nothing could change you
Set and sure of the way
Charming and bright
Laughing and gay
I’m just a stranger
Love the Blues and the Braves
There is the sun and moon
Facing their old, sweet tune
Watch them when dawn is due
Sharing one space

Some walk by night
Some fly by day
Something is sweeter
When you meet ‘long the way
There is the sun and moon
Facing their old, sweet tune
Watch them when dawn is due
Sharing one space