So far so good with this annual challenge to write seven posts in seven days, but as I was away last weekend, today the garden beckoned. Lots of plants to be bedded in and pots to be filled. I am seriously cream-crackered so this will definitely have to be a shorter post.

One of the gardening pressures I have, is that I am custodian of the “family begonias”. Some people inherit money and some inherit good genes. After my dad’s death I inherited begonia corms! These corms have passed down the generations and can’t be purchased in garden centres nowadays but continually reproduce every year. I usually have around ten tubs of beautiful red flowers in my garden every summer but as the only child, of an only child, of an only child, I feel the pressure not to render them extinct. Darling daughter is sadly disinterested in gardening at the moment, but then again so was I at her age, so all is not yet lost – Down the line these knobby corms will become hers, and hopefully she will rise to the challenge of keeping them going for another generation.

These begonias have been mentioned in this blog before, when I wrote about The Proclaimers’ song Letter From America (link here). The lyrics reminded me that although my family in Scotland is really small, if I included all those who left for America at the turn of the last century to find work, and perhaps their fortunes, it would be enormous. My grandad’s aunts and uncles all left the family croft and made the brave journey across the Atlantic to the New World. To track down their offspring would be an enormous task, and one that might have to be a retirement project, but at this time of the year I often wonder if any of them took a few begonia corms with them, as a reminder of home. If they did, there could well be gardens all over America with pots of red flowers just like mine. 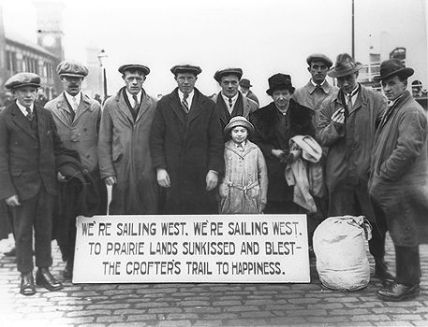 Letter From America by The Proclaimers:

The Scottish diaspora is said to be around five times the size of our native population, and often far more fervently Scottish. Caledonian Societies abound and many bands from Scotland are probably far more widely known in “The Colonies” than south of the border. The folk band Capercaillie was founded in the 1980s, and is fronted by singer Karen Matheson. The group adapt traditional Gaelic music and lyrics with modern instruments such as electric guitar or bass and are probably one of our most successful exports. Here they are performing Cape Breton Song at Aberdeen’s Capitol Theatre in 1992.

But I always include the lyrics in my posts and although I laboured over Peter Kay’s Car Share Buddy song yesterday (which I couldn’t find anywhere), this time the lyrics are in Gaelic, so I have no chance. Time to think of another song that seems to go down well in those parts of the world where the residents often have a surname with the the prefix Mac. The song Caledonia was written in 1977 by Dougie MacLean – He was on a beach in France, feeling homesick, and wrote it in less than ten minutes. The song has became something of an anthem for Scotland and has been covered by many artists. The version I have in my collection is by Frankie Miller, so the audio clip will be that one, but for the video clip I think it will have to be the man himself. I wonder if he is also custodian of the family begonia corms?

I don’t know if you can see
The changes that have come over me
In these last few days I’ve been afraid
That I might drift away
I’ve been telling old stories, singing songs
That make me think about where I’ve come from
That’s the reason why I seem
So far away today

Let me tell you that I love you
That I think about you all the time
Caledonia, you’re calling me, now I’m going home
But if I should become a stranger
Know that it would make me more than sad
Caledonia’s been everything I’ve ever had

I have kissed the fellas and left them crying
Stolen dreams, yes, there’s no denying
I have travelled hard, sometimes with conscience flying
Somewhere with the wind

Let me tell you that I love you
That I think about you all the time
Caledonia, you’re calling me, now I’m going home
But if I should become a stranger
Know that it would make me more than sad
Caledonia’s been everything I’ve ever had

Now I’m sitting here before the fire
The empty room, the forest choir
The flames have cooled, don’t get any higher
They’ve withered, now they’ve gone
But I’m steady thinking, my way is clear
And I know what I will do tomorrow
When hands have shaken, the kisses float
Then I will disappear

Just in case anyone doesn’t know what I’m talking about when I mention the word “corm” – This is what they look like. 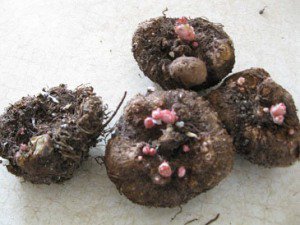 Not very attractive granted, but once buried in some soil they start to perform their annual magic.