On the home straight now, so looks as if I’m going to achieve my goal of writing seven posts in seven days. Today’s post should almost write itself, so here goes….

Last night I went to our local theatre. As a birthday surprise, a kind friend had bought me a ticket for the stage show Fastlove, which has the tagline A Tribute To George Michael. At first I was a tad worried – Although the friend knows I write a blog that is (tenuously at times) linked to the world of music, they have respected my wishes not to share it with them. Writing for complete strangers (who in many cases have become virtual friends I have to say) seems to be a lot easier than writing for people you know. The upshot is that she wouldn’t have known just how upset I was when I heard of George’s death on Christmas Day 2016, and she wouldn’t have known just how many Open Letters I have written to him since – I now have a whole George Michael category on my sidebar (link here) and there seems to be no sign of me ever running out of material for new posts. This one is a case in point.

But back to the show – I shouldn’t have worried. Although I had thought I would never want to hear anyone perform George’s songs except George, to my great surprise I really enjoyed it. It was a highly professional production having started off in London’s West End. They took great pains to make sure, we the audience, realised this was not “A Tribute Act”, but in fact “A Tribute” – to George. The word tribute was never actually mentioned, but instead it was called an opportunity for us all to honour George’s memory, and I think we pretty much achieved that. 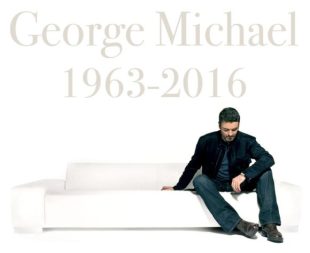 The chap who played George was excellent, and dare I say it, as good a singer as George himself. We sometimes forget that for every excellent singer out there, only a tiny proportion ever make it big and become recording stars. Here was someone who was a gifted singer but had gone down a different path. Also it is easy to look like solo artist George, as post-Faith (the album), his uniform was usually black trousers, black T-shirt and a smart jacket. Add to that a pair of dark glasses, the distinctive haircut, a neatly trimmed beard and you’re pretty much there.

As for the songs, all the usual suspects were performed (accompanied by a fine band I might add which included a female sax player – her solo at the start of Careless Whisper was a definite crowd-pleaser). We were only a few songs in however when something occurred to me – An awful lot of George’s songs start with the letter F, and if they don’t start with the letter F, they start with the letter A. Obviously the show had kicked off with Fastlove but then we were treated to Father Figure, Faith, Freedom! ’90, Flawless and (Too) Funky. In the second half we had the Wham! hit Freedom but then the A songs started to made their presence felt and we had A Different Corner, As and Amazing. When I got home I decided that if George had written his song lyrics using a qwerty keyboard he must have been left-handed, as when your fingers rest on the home keys, the easiest ones to press are F (forefinger) and A (pinky). One letter and inspiration struck – He was off. (But then again maybe I’ve worked in offices for too long and am overthinking it!)

So, what should the featured song for this post be? Since many mentioned above have appeared in previous posts, and are already listed on my Featured Songs page, it should be one of the other F’s – Freedom! ’90 was one of the more up-tempo songs of the evening, so that one it shall be. I see that back in 1990 it was originally released as Freedom! but that probably caused confusion with the Wham! hit Freedom (argh so many exclamation marks!!), so it now seems to have had the year added as a suffix.

I was surprised at how much I enjoyed last night’s show and had it not been for the ticket bought for me as a gift, I probably wouldn’t have risked it, but a good night was definitely had by all 800 ladies “of a certain age” in the audience. A few of them were up on their feet early on, and I was sorely tempted myself, but always feel bad for the people sitting behind who will then get a rubbish view – By the end of the night however we were all up on our feet, and although sadly it wasn’t George himself, someone who looked awfully like him closed the show, by taking us all to The Edge Of Heaven!

Heaven knows I was just a young boy
Didn’t know what I wanted to be
I was every little hungry schoolgirl’s pride and joy
And I guess it was enough for me
To win the race? A prettier face!
Brand new clothes and a big fat place
On your rock and roll TV
But today the way I play the game is not the same
No way
Think I’m gonna get myself happy