Yesterday’s foray into the musical output of Andy Williams, has reminded me of some of those other great songs from the 1960s. Turns out many hits from that era were recorded by a whole host of other artists and Petula Clark often released songs previously recorded by Mr Williams.

A good few years ago after discovering iTunes, we went a bit mad revisiting the “tracks of our years” and probably down to the nostalgia element of remembering happy times as a child with my family, I ended up purchasing quite a few songs from 1967, which was probably the first year I really started to take heed of anything from the world of grown-up music. One of these songs was Don’t Sleep In The Subway by Petula Clark simply because it summed up the sound of my 1960s. The whole hippy thing was happening on the West Coast of America but flower power and psychedelia definitely didn’t come to my Scottish village so the kind of music listened to by families like mine, who watched mainstream television, came from people like Pet Clark, Cilla, Dusty, Lulu and The Seekers. The song was written by Tony Hatch (along with his wife Jackie Trent) and the relationship he had with Petula was likened to the one between Burt Bacharach and Dionne Warwick. They also worked together on Downtown, I Couldn’t Live Without Your Love and The Other Man’s Grass Is Always Greener.

Don’t Sleep In The Subway by Petula Clark:

Listening to this song again, it’s about a couple having a “domestic” so not really the jaunty, upbeat number I had always considered it to be. There are a few lyrics in there I find vaguely amusing, and don’t quite fit the rhythm of the music (’cause it hurts when your ego is deflated, um-m-um-um-um-um), but I don’t profess to be an expert at this kind of thing and it did sell an awful lot of records, so who am I to pick holes?

As a matter of interest, a couple of the other songs I purchased from that year were Georgy Girl by The Seekers and To Sir With Love by Lulu. Neither of the films that these songs came from were about particularly jaunty, upbeat topics either but they are still great songs, so well worth another listen.

Georgy Girl by The Seekers:

To Sir With Love by Lulu:

As it turns out my rose-coloured spectacles regarding the 1960s were severely tested this week as I watched the 1966 Ken Loach television play Cathy Come Home starring Carol White and Ray Brooks. It was a landmark piece of broadcasting at the time and told the harrowing story of an initially happy young couple with children, who due to unfortunate circumstances suffer the trauma of unemployment, poverty and homelessness. It was filmed in a doumentary-style which made it all the more poignant but for me the worst aspect was that fifty years on, many young couples with children still suffer the same problems today. It does sadden me that although we have made amazing advances in certain aspects of life (having the technology to amuse ourselves with all this malarkey), we still have people sleeping in subways, and that just can’t be right. 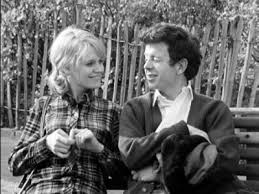 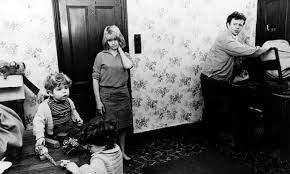 Getting too maudlin now so will leave it there for today but realising as I revisit the tracks of my years, that those seemingly happy, up-tempo songs often told a very different tale, and one which I am only now appreciating.

Ooh, you walk out on me
when we both disagree
’cause to reason is not what you care for

I’ve heard it all a million times before
Take off your coat, my love, and close the door

Good-bye means nothing when it’s all for show
So why pretend you’ve somewhere else to go?