I had a long and sad journey to make yesterday as my 56-year-old cousin, who was diagnosed with MND nearly four years ago, finally lost his battle with that horrible “locked-in” disease. Down to the excellent round-the-clock care given to him by his mum and sisters, he outlived most other victims post diagnosis, but everyone knew it was time for his suffering to end and his friends turned out in droves to his memorial service in Aberdeen. It was standing room only and I don’t think I’ve ever been to a service where quite so many middle-aged men found it impossible to control their emotions. The main reason for this outpouring of emotion – Football. 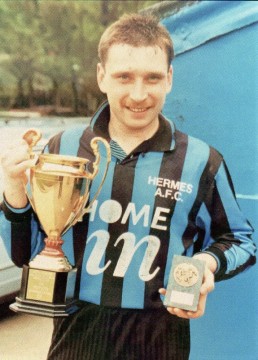 My cousin didn’t have a glittering career or ever earn vast sums of money but he worked hard, raised a family and was a loving father, son and brother. From an early age however, his passion was football, and for nearly 35 yrs he played in the many Junior and Amateur leagues run within The Granite City. Apparently he was still playing at age 50, just two years before his diagnosis. Facebook is awash with tributes to him and of his many exploits on the pitch. He had played with, and captained, many teams over the years so knew the entire footballing fraternity and they had nothing but good things to say about him – A legend, a true gent, a prankster, a great friend, and so it went on.

There is a dearth of quality football songs out there, so I’m just going to go with the obvious choice, Football Crazy, a song written back in the days of yore but made popular by Robin Hall and Jimmie Macgregor when they regularly performed their version of it on the Tonight programme back in the early 1960s. I don’t remember watching this show back then (just too young), but I must have recognised the theme tune as I always knew when “Ciff” (that would be Cliff Michelmore) came on the telly, it was time for bed (we didn’t climb the stairs to Bedfordshire where I came from).

Strangely enough, last Saturday I went to our football stadium for the first time in nearly 20 years to watch the local team. DD’s boyfriend, who looks after the team’s physical (and often mental) welfare, got us tickets for the section where the player’s wives, kids and mums sit. They probably go to every home match and build up that familiarity and camaraderie from spending so much time together. I watched friends meet up for their weekly fix of football; old men turning up in their scarves who have probably been fans since they were lads; and the staff who kept everything running like clockwork – A massive footballing family. It was nice.

This week we have had the freaky scenario where two English teams who were not expected to come back with a win on aggregate, did just that – Even fans of other teams, usually fierce rivals, have come out and congratulated them on those fantastic wins. Just at the time we were supposed to have left the EU, both Liverpool and Tottenham Hotspur are on their way to Madrid and the Champion’s League Final. There’s going to be an English winner now whatever the outcome.

This time last week I wasn’t really thinking much about football at all, but as with my cousin, if it has played a large part in your life you could be one of the lucky ones as you are part of one big family. Many of the middle-aged men at yesterday’s service had walked, ran and climbed improbable distances and heights to raise money for a vehicle for their old team-mate. They called it the Stephen-Hawking-mobile and there were many great outings in it. There have also been fund-raising dinners for MND and the many other charities who supported him and his family over the last few years. I don’t know for sure, but I doubt very much if my old work-mates would do the same for me.

On a personal level, one of the player’s mums sitting behind me at last weeks match turned out to be a carer at my mum’s nursing home. I had thought she looked familiar but out of context I couldn’t place her. Having now met with her this week at the home, I realise my mum will now potentially be even better looked after, as I am now (somewhat loosely) attached to her son’s team.

So, a sad week for my family, but as ever at these events it was great to meet up with people whom I have been out of touch with for a long time. Plans are now being made for me to keep in touch with everyone and contact details have been exchanged. It seems unfair that people who are the healthiest, fittest, kindest and most generous can be dealt such a cruel blow, but no-one ever said life was fair.

I have a favourite brother
And his Christian name is Paul.
He’s lately joined a football club
For he’s mad about football.
He’s got two black eyes already
And teeth lost from his gob,
Since Paul became a member of
That terrible football club.

For he’s football crazy,
He’s football mad,
The football it has taken away
The little bit o’ sense he had,
And it would take a dozen servants
To wash his clothes and scrub,
Since Paul became a member of
That terrible football club.

In the middle of the field, one afternoon,
The captain says, “Now Paul,
Would you kindly take this place-kick
Since you’re mad about football?”
So he took forty paces backwards,
Shot off from the mark.
The ball went sailing over the bar
And landed in New York.

His wife, she says she’ll leave him
If Paulie doesn’t keep
Away from football kicking
At night-time in his sleep.
He calls out ‘Pass, McGinty!”
And other things so droll
Last night he kicked her out of bed
And swore it was a goal!