Well, it’s safe to say that stress levels are running at an all-time high in my workplace. The conversion to a LEAN working environment is making the carrying out of normal duties nigh impossible as on an hourly basis, the tools of our trade, namely desks, shelving, files and stationery are being shipped out to that mythical warehouse, where items that do not fit the modern day workplace, end their days. Considering I am having to re-apply for my own job in this brave new world, I’m starting to worry that I am also going to end up in that mythical warehouse – Mr WIAA may well have to send out a search party. But, being serious, it will probably be great when it’s all finished, it’s just that I’m not a great handler of stress and yesterday’s migraine (of the ziggy-zaggy variety) proved it. 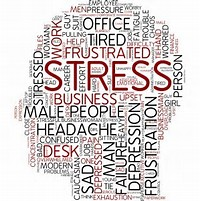 Very recently I admitted on these pages that I seem to have now found myself addicted to blogging. The feedback was very much of the opinion however that it can also be seen as a great stress-buster – Last night, at 10pm, I decided to test that theory out. I am happy to say that after an hour of visiting my favourite blogs and leaving a few comments (although a mere nano-second after posting something I always wish I’d worded it better or corrected the grammar – I hope I’m not alone in this), I was indeed feeling a lot less stressed. I had the best nights sleep I’ve had all week and thus handled today’s chaos of moving to a LEAN and orderly workplace, a lot better. Thank you then fellow-bloggers, the stress-busting theory does seem to work.

Music of course is another great stress-buster and for me, in my current situation, it had to come from the world of – as the Americans call it – Adult Contemporary. On the way home from work I needed a bit of Karen Carpenter to smooth my furrowed brow. She had the most wonderfully soothing singing voice as she was a contralto, the lowest female voice type. I must also be a contralto then, as whenever I tried to sing chart hits when growing up, those Carpenter songs were the ones I seemed to master best – I could even do that twiddly key changing bit that sounds like yodelling (although there is probably a technical term for it). On the odd occasion a karaoke machine appears at an event, I always start off by refusing point blank to sing, BUT, after a few drinks I end up having to have the mic forcibly removed from my hand once my Karen Carpenter repertoire kicks in. (Although my versions of her songs are a pale imitation of course.) 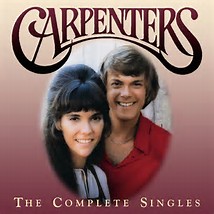 The only downside to listening to The Carpenters back catalogue is that the lyrics are all just so damn melancholy – There was Goodbye To Love, Rainy Days and Mondays, Yesterday Once More and Solitaire. Even the jaunty upbeat songs somehow ended up sounding sad at the hands of Karen and brother Richard (Top of the World, Please Mr Postman). As a fan I do enjoy a wallow in all of that sadness from time to time but not to be recommended as a regular pastime.

I have still not really come to terms with how she lost her grasp on life at the very young age of 32 due to complications arising from the illness anorexia nervosa. I was still a child when The Carpenters first started appearing on television but over the years even I noticed the dramatic change in her appearance and wondered what on earth was going on. We knew so little about that particular illness back then and the solution offered up by her management was that she wear a jacket on stage – It now beggars belief but those of course were far less enlightened times although even today, with an early diagnosis, there is not always a positive outcome.

Superstar by The Carpenters:

This afternoon however I just wanted to hear a little bit of that mellifluous singing voice and of late, the Carpenters‘ song I am drawn to most is Superstar from 1971 – It is about a brief liaison with a rock star who has now moved on to the next town. The girl is sad, lonely and yearning for him to return but it still sounds just so beautiful at the hands of the singing maestro that was Karen Carpenter.

So, “What’s It All About?” – As a stress-buster, blogging certainly does seem to have its place but so does listening to music and thankfully we all have our own particular favourites for that function. The Carpenters were never seen as “cool” but no-one could deny their talent and Karen’s voice certainly eases my stress. Grammy Award winners The Starland Vocal Band were never seen as “cool” either, but their 1976 solution for stress was adopted by the Taco Bell people who of course realised that all the LEAN office needs is the occasional opportunity to head out for a tasty snack! I give you, Afternoon Delight.

Long ago, and, oh, so far away
I fell in love with you before the second show
Your guitar, it sounds so sweet and clear
But you’re not really here, it’s just the radio

Don’t you remember, you told me you loved me baby?
You said you’d be coming back this way again baby
Baby, baby, baby, baby, oh baby
I love you, I really do

Loneliness is such a sad affair
And I can hardly wait to be with you again
What to say to make you come again?
Come back to me again and play your sad guitar

Don’t you remember, you told me you loved me baby?
You said you’d be coming back this way again baby
Baby, baby, baby, baby, oh baby
I love you, I really do