This month’s full moon appears in our skies on the 29th May. Spring has well and truly sprung by the time May arrives, and flowers and colourful blooms should be dotting the landscape. Very appropriately then, this moon is called the Flower Moon but it’s also sometimes known as the Corn Planting Moon, or Bright Moon because it tends to be one of the brightest. Looking out at my garden right now there aren’t that many flowers in bloom at all yet, as I’ve just taken out the spring bulbs but haven’t yet potted up anything new, as a real risk of frost here in the North of Scotland until the month of June. Probably won’t be one of the brightest moons for me either, as I don’t know about where you live, but sometimes it’s still light now when I go to bed – Will make a special effort however and stay up late on Tuesday to witness it.

But onto the song choice – This post’s moon-related song was always going to pop up at some point in this series, and having already discovered so much interesting stuff about the moon…..

As children, we have probably all looked up at the moon and seen a face. That would be because the giant dry seas and craters kind of map out eyes, a nose and a mouth. This only works if you are in the Northern Hemisphere however as in the Southern Hemisphere the features would be upside down. And, these features only appear on the side of the moon facing us as on the other side, the dark side, the surface is merely textured, with no discernible shading at all. 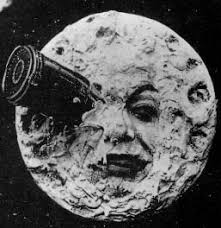 But all that is about the Man In The Moon, or how we perceive him anyway. This post’s featured song is about the first Man On The Moon, or rather the idea that we might have been duped into thinking it actually happened, when in fact there are those out there who would dispute that fact. It all boils down to that pesky flag – After watching a particularly convincing documentary about the moon-landing conspiracy theory, I even started to doubt it all myself. But no, the computer power that could now fire up a pocket calculator (if they still exist) was all that was actually needed to get those first men on the moon, and as for the flag appearing to blow in the wind (?!), it’s actually a much more boring story. An upside down L-shaped frame was made for it and after being crumpled up in the lunar module for some time, it took on the appearance of a flag being wafted about by all those supposedly non-existent winds. It’s still up there, along with another five left by visiting astronauts, although one has apparently now fallen over after having been hit by the lunar module upon its departure.

Back in 1992, the band R.E.M. released a song called Man on the Moon, the second single from their 1992 album “Automatic for the People”. The lyrics were written by lead singer Michael Stipe as a tribute to the comedian and performer Andy Kaufman. We’re probably not that familiar with Andy Kaufman in the UK but it seems he was quite the showman, appearing on Saturday Night Live in a variety of guises. In the song numerous references are made to his career including his Elvis impersonation, wrestling, and the film My Breakfast with Blassie. Because there were always rumours that Kaufman’s death in 1984 was faked, Michael used the moon landing conspiracy theories as an oblique reference to that allusion in the chorus.

As anyone who visits here regularly knows, I’m usually quite late to the party, and it wasn’t really until “Automatic for the People” that I started to properly appreciate R.E.M. – I’ve mentioned this before, but in 1993 we went on holiday to a far flung place where we very naughtily acquired many, many cassette tapes of the not entirely legitimate nature. This album was one of them, and once back at home it got a serious amount of listening time, as it also included the singles Everybody Hurts, Nightswimming, Drive, The Sidewinder Sleeps Tonight and Find The River.

Having just done a little research, it seems the band are all around my age and since the album apparently dealt with themes of loss and mourning inspired by “that sense of …. turning thirty”, it obviously resonated with me at the time. We are all almost twice that age now so quite mind-boggling that a 30th birthday could have been such a big deal at the time – A lot of water under the bridge since those days, but more appropriately for this post a lot of full moons, 334 to be precise. So, remember to look out for the one on Tuesday night and cross fingers there will be many, many more, for all of us.

Now, Andy did you hear about this one?
Tell me, are you locked in the punch?
Andy are you goofing on Elvis? Hey, baby
Are we losing touch?

Now, Andy did you hear about this one?
Tell me, are you locked in the punch?
Andy are you goofing on Elvis? Hey, baby
Are you having fun?

Now, Andy did you hear about this one?
Tell me, are you locked in the punch?
Andy are you goofing on Elvis? Hey, baby
Are we losing touch?

It’s become a feature of these posts for me to tag onto the bottom a picture of the previous month’s moon, courtesy of my photographer friend (he is purely a hobbyist but I do love his pictures). This one just goes to show that some of the most impressive moon shots are sometimes those where the moon is actually obscured by cloud. And when a viaduct is involved as well, it just gets better and better….