I seem to have all but abandoned the idea of writing randomly as each song I write about seems to lead straight onto another one – Just the way the brain works I suppose. Inevitably therefore, after mentioning Robbie Williams last time, I would end up thinking about all those other great songs and videos he made at the end of the ’90s/early 2000s. For the video to accompany Millennium he played the role of James Bond but for the video to accompany the year 2000 song Supreme he played “Bob Williams”, a fictitious rival to Jackie Stewart at the height of his Formula One career. The video was edited using the split screen technique often seen in films from the ’60s and they cleverly wove together new footage of Bob Williams with the original 35mm celluloid footage of Jackie Stewart.

As I have said before, there was a real worry in the early ’80s that video would kill the aural-only music experience (as per the lyrics to Radio Ga Ga) but that never really came to pass. I must admit however that I did enjoy Robbie’s videos at this time immensely and they definitely added to the appeal of the songs. He seemed to be having the time of his life and who could blame him – Cocktails with Nicole Kidman and horse-riding with Daryl Hannah for goodness sake.

I am conscious of the fact that since starting this blog I have hardly written about any songs from the 2000s (only Tears Dry On Their Own) and this one just creeps into that decade and no more. When you are a working parent of a 5 to 15 year old as I was throughout that decade, you have very little time for yourself and the music I ended up consuming was my daughter’s choice of pure pop, Disney soundtracks, the songs from television shows (yes we were fans of Pop Idol and The X-Factor in the early days) and older stuff caught on the radio. If we ever visited friends who didn’t have children, the CDs lying around were all by Nora Jones and the sophisticated bands of the day whereas in our house it was S Club 7, Busted and Avril Lavigne. I might be exaggerating a little here but it is kind of true – The importance of what is No. 1 in the charts is not really an issue when you perhaps have a poorly child and a work deadline to meet. There are those lovely moments however when something comes on the car radio and your small child gives you a big smile and lets you know that your favourite song by “Robbie Michaels” has just come on! 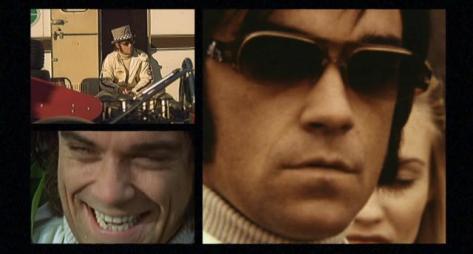 But back to Robbie and Supreme, I think I especially loved the video for that song because I have a fondness for all those old films about the world of motor-racing. As I said last time, I particularly love the Sean Connery Bond era (the garish colour, the glamorous locations, the beautiful clothes) and another ’60s film that covered all those bases was Grand Prix starring, amongst others, James Garner and Eva Marie Saint. Like with Robbie’s video, the use of footage from the real world of Formula One was incorporated and even our own Graham Hill had a cameo role as one of the drivers. It must be something about the long Scottish winters but when colour came to our television screens in the early ’70s and we were able to watch these films properly for the first time, we couldn’t get enough of them. I do blame my mother however for not pointing out until I was around ten, that Grand Prix was not pronounced phonetically (embarrassed myself a few times with that one I think).

As well as the film Grand Prix there was also the excellent film Le Mans starring Steve McQueen, and more recently Rush starring Chris Hemsworth which was about the ’70s rivalry between James Hunt and Niki Lauda. I remember that era well and used to love watching interviews with Hunt, a firm favourite on television chat shows. The film recreated it all really well. 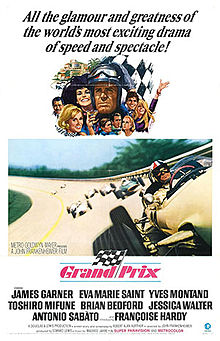 Robbie Williams has continued to have an amazing career and even rejoined Take That for one album and a tour (didn’t ever expect that to happen but glad he and Gary made up in the end). Something that does bother me however is that he has had long bouts of depression over the years. He is the consummate entertainer and can sing, dance and play the fool on stage, but like so many before him the pressure of keeping us entertained has taken its toll. I have written before about the flamboyant artists who are incredibly shy in private and create a stage character or alter-ego. Robbie isn’t shy but he finds it hard to be serious, always resorting to the funny one-liner or comedy moment (even at the end of the video for Supreme). There have been numerous studies on the link between creativity and mental illness and sadly there does seem to be one – The phenomenon of the sad clown. I hope now that he has a family, he can rid himself of the black dog.

Before I finish I’d like to mention that Robbie’s career started with a stint playing the Artful Dodger in Oliver! (exclamation mark part of that musical’s title, not shock on my part). I have already written about Davy Jones of The Monkees who also shot to stardom after a similar stint on Broadway and it is part of pop folklore that Phil Collins also started out that way. There are no doubt many others out there I don’t know about but it makes me wonder – If your son is currently treading the boards in that role, it could be the first step on the ladder to global stardom. Just saying……

Yeah are you questioning your size?
Is there a tumour in your humour,
Are there bags under your eyes?
Do you leave dents where you sit,
Are you getting on a bit?
Will you survive
You must survive

Oh what are you really looking for?
Another partner in your life to
abuse and to adore?
Is it lovey dovey stuff,
Do you need a bit of rough?
Get on your knees