Well after a bit of a slow start this year (I blame too much time spent in the very absorbing virtual world of late, and not enough time in the real world), I have now totally embraced Christmas. This therefore will have to be a very short post as unbelievably I still have to buy and deliver a few presents, and source the rest of the food to add to the embarrassment of calories that is the traditional Christmas lunch.

So far so good however and despite being up until 4am checking out darling daughter’s whereabouts (it was “Mad Friday” after all, so a bit of a worry), I am up and at it. Our lovely postman, who does go beyond the call in attempting to deliver some of the odd items that arrive in the mail (Mr WIAA being a sculptor an’ all), has already been tracked down and given his Christmas tip. Today I was in “weekend wear” but already this week he has seen me in “straight-out-of-the-shower wear”, “serious-business-woman wear” and “Christmas-jumper-themed wear”. He sees me in more guises than my husband but has become a bit of a friend, so was pleased to see he had his Santa hat on today – All the better to keep his ears warm on this cold morning.

Interestingly, the reason that robins are such a symbol of Christmas is because Victorian postmen wore a bright red uniform. The postmen in their red-breasted coats resembled the much-loved bird, the robin red-breast, earning them the nickname – Robins.

But I digress as this is supposed to be a music blog despite the fact I often stray into other territory. I think my favourite Christmas Album still has to be the one produced by Phil Spector in 1963 called “A Christmas Gift for You from Phil Spector” (originally released as A Christmas Gift for You from Philles Records). Spector treated a series of Christmas standards to his trademark wall of sound treatment, and the selections feature the vocal performances of Spector’s regular artists during this period, Darlene Love, The Crystals, The Ronettes etc.

Although I now have a copy of the digitally remastered version in CD format, the version I played to death in the early ’80s was the double album vinyl release, when the pink album was Phil’s Christmas one and the blue album was his Greatest Hits one (bit like the Beatles’ Red and Blue Greatest Hits albums). When my flatmates were playing synth-pop and new wave, here I was listening to the fab sounds of Phil Spector and his wall of sound, but then I’ve always been a bit out of kilter timeline-wise, which is why perhaps this year I am smitten by the music of 1967. 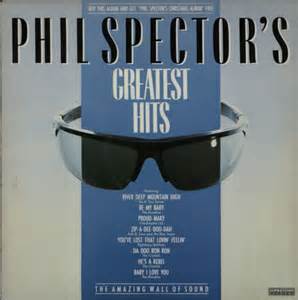 The Christmas album has grown in popularity over the years and is full of tracks that have became iconic seasonal songs. My favourite track is Sleigh Ride by The Ronettes where they feature their well-known “ring-a-ling-a-ling ding-dong-ding” background vocals. Their version also made use of the clip-clopping of the horses as well as the sound of a recorded horse whinnying, heard at the beginning and end of the song. It doesn’t get any more Christmassy than that.

Sleigh Ride by The Ronettes:

So, “What’s It All About?” – Christmas starts too early nowadays I feel, but now that Christmas Eve is here I am ready to embrace the excess that will follow over the next couple of days. My plan to help the homeless has been somewhat scuppered as I am reliably informed by those in the know, that they will be well-catered for locally this year, by the professionals who specialise in this kind of thing. It turns out however that the biggest social issue of the day, is loneliness amongst the elderly, so the best thing to do is to make sure that my 81-year-old mum and her little band of buddies at their very swish “retirement” complex, are kept entertained.

Merry Christmas to all my blogging buddies – I didn’t even know this place existed this time last year and in less than twelve months have made a good few like-minded friends of the virtual nature. I have long nagged my daughter and her friends to get out into the real world, and not spend all their time on their devices, but have now discovered myself that it does indeed have its place. Have a good one!

Our cheeks are nice and rosy
and comfy cosy are we
We’re snuggled up together
like two birds of a feather would be
Let’s take that road before us
and sing a chorus or two
Come on, it’s lovely weather
for a sleigh ride together with you.

There’s a birthday party
at the home of Farmer Gray
It’ll be the perfect ending a perfect day
We’ll be singing the songs
we love to sing without a single stop,
At the fireplace while we watch
the chestnuts pop. Pop! pop! pop!

There’s a happy feeling
nothing in the world can buy,
When they pass around the chocolate
and the pumpkin pie
It’ll nearly be like a picture print
by Currier and Ives
These wonderful things are the things
we remember all through our lives!
of a wintry fairy land

Our cheeks are nice and rosy
and comfy cosy are we
We’re snuggled up together
like two birds of a feather would be
Let’s take that road before us
and sing a chorus or two
Come on, it’s lovely weather
for a sleigh ride together with you.