I can scarcely believe it’s been four weeks since my last “moon post”. What is it with time? The older you get, the faster it seems to whizz by. I heard a great quote recently, where the phenomena was described as such: “Life is like a roll of toilet paper. The closer it gets to the end, the faster it goes.” How apt I thought.

Anyway, it is now nearly a month since we witnessed (or didn’t in my case) January’s lunar eclipse. This month, we should witness the Snow Moon on the night of the 19th February. I had intended to use the alternate names for the full moon this year, however last year, because of the 29 and a half day lunar cycle, we didn’t have a full moon in February at all. Instead, we ended up with two Blue Moons (a second full moon in the same calendar month) on either side. As I said at the start of this series, no two years will ever be the same.

But this is a moon post, so what song to feature this time. Well, getting back to that old chestnut time, or rather the lack of it this week, I am going to cheat a little and include a song that has previously been included as part of another series. I started out with great gusto on my American Odyssey in Song in early 2017, but floundered last year upon reaching little Delaware. There was only one obvious contender for that state, but I didn’t want to write about it, and that was that. Fortunately, George has picked up the mantle, and is manfully making his way round the 50 states over at CC’s place. Lets hope, unlike me, he doesn’t flounder when he reaches Delaware.

This is a very roundabout way of saying, the song I’m going to include to accompany the Snow Moon, is Moonlight in Vermont by Willie Nelson. I didn’t actually know the song until it was suggested as a contender for my series, and after listening to several versions (it has been recorded by just about everyone), the one I warmed too most was Willie’s version.

Moonlight in Vermont by Willie Nelson:

Willie Nelson is of course one of the greats of country music, and when he decided to record an album of standards called Stardust, in 1978, he wanted the song to be on it. It is considered the unofficial state song of Vermont and is frequently played as the “first dance song” at wedding receptions. It was written in 1944 by John Blackburn and Karl Suessdorf, and is unusual in that the lyrics take the form of a haiku.

And again, I’m going to share this heart-warming little story connecting my grandfather to the state of Vermont and to the song. Whilst doing a bit of research for my “Vermont post” back in 2017, I made an interesting discovery. The blacksmith and inventor John Deere was born there, and he was the man responsible for giving us much of the agricultural and construction equipment still used today, specifically the large steel plough.

My grandfather was not the “lineman for the county”, but he was the “roads supervisor for the county” back in the 1950s. The climate and landscape of the North of Scotland would have been similar in many ways to that of Vermont, so thank goodness for the large snow plough attachments that came across from America just at the time my grandfather was responsible for keeping the often snowbound, highways and byways of Aberdeenshire open. Back then, before the days of television, the wireless was the main form of home entertainment, and I feel sure my grandfather might well have listened to an early version of the song Moonlight in Vermont before heading out for a night-shift on one of those giant snow ploughs. 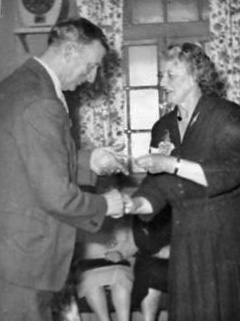 Ploughing in the Moonlight 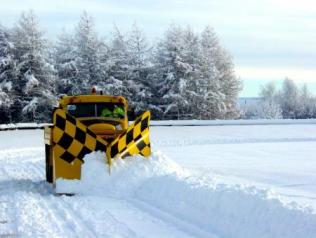 So, “What’s It All About?” – I apologise for this bit of lazy blogging, but I did kind of fall in love with the song first time around, and always thought it would make a reappearance at some point in this Moon Series. Also, there has been very little snow with us so far this year, and as I needed some snow shots to accompany the post, Vermont manfully came to the rescue.

As for my holiday hideaway, more of that to follow no doubt, as I get it up and running. It has just hit me however, that it has all kind of come about because the daughter of the man in the picture above, my mum, is now an 83-year-old herself, and in need of a care home. Time marches on indeed, and the younger generation becomes the older generation, in what feels like the wink of an eye.

Lord knows I have had plenty of rants over the last year about the current state of adult social care and the dementia tax, so I won’t go there again, but in the event my mum’s funds run out, and I have to contribute to the care home fees, I am at least trying to put in place a means of doing so. For anyone out there who has not yet done so, start having the conversation early on as to how you want things to go should the unthinkable happen. We sadly didn’t, and some bad decisions were made, without the help of professionals. Wouldn’t want to land DD in a similar position.

But hey, I don’t want to end this post on a negative note. There is a lot to be positive about at the moment and I am embarking on a totally new career in my late 50s, so that can’t be bad. Willie Nelson however is still out there campaigning and performing at the age of 85, so it just goes to show, age is no barrier to taking up new challenges.

Pennies in a stream
Falling leaves, a sycamore
Moonlight in Vermont

Icy finger-waves
Ski trails on a mountainside
Snowlight in Vermont

Telegraph cables, they sing down the highway
And travel each bend in the road
People who meet in this romantic setting
Are so hypnotized by the lovely
Evening summer breeze
Warbling of a meadowlark
Moonlight in Vermont