Thought this post would be really easy to write as it was BRITs week and we found out who the big winners were on Wednesday night’s live show. Unlike my husband, I have always watched the BRITs, since the days they were called the BPI Awards. Back then, in 1982, it was cosy little affair held in a smallish venue, not the juggernaut of show now held in the O2 Arena with an audience of thousands.

The great thing about the BRITs for me, is that I get a chance to find out about all those artists who may have slipped under my radar in the course of the year. Apart from Tame Impala who won the award for Best International Group, I had heard of everyone and sorry to say, most of the nomimees have been around for a very long time. Coldplay won the award for Best British Group and yes they are a great group, and yes they have had massive success, but their first BRIT award was in 2001 for goodness sake. When it came to nominations for Best International Female, Bjork’s name was read out which surprised me as she has been around since the 1980s when she fronted Indie band The Sugarcubes. Lo and behold – Bjork was the winner. 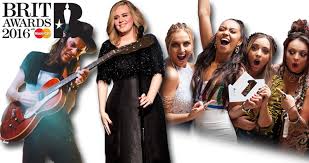 So it seems that the British Phonograph Industry has gone the same way as a lot of other well-established industries. The median age of the people running them is going up every year, and this is reflected in who wins awards. Maybe I am wrong here, but to me, the winners were all a pretty respectable bunch who have been around for a long time and are a safe pair of hands when it comes to their musical output. None more so than Adele who every few years produces a new album that sweeps the board at award ceremonies and outsells everything else on the market – She did it at 19, at 21 and now at 25. She was the big winner of the night and bar the fact that the bleeper man misjudged his timing, and let one of her conversational expletives slip through to live television, all the “Suits” as she herself has called them, must have been feeling pretty smug with themselves.

So if the awards themselves were a bit predictable, what about the performances – There are usually a few excellent ones in the course of the evening including a pretty special duet and something we will all be talking about the next day. Last year there was Madonna’s spectacular “fall” from grace when her cape fastening malfunctioned. This year, other than some questionable choreography from Rhianna and Drake, there was nothing of note. I did enjoy James Bay’s guitar accompaniment to Justin Bieber’s vocals but nothing to write home about. Jess Glynn did a great set but although very now and of the moment, I feel she could have come from any of the last few decades – Something about her style I think.

Adele, the big winner of the night, performed her song Hello to close the show. It was predictably perfect but didn’t blow me away quite as much as her rendition of Someone Like You at the 2011 BRITs. She was quite a bit younger then and was visibly moved by the song she was singing, which was about a failed relationship.

I have written on a few occasions now about the “break-up song” and this one really tugs at the heartstrings. My break-ups were all a lot earlier than 2011 thankfully, otherwise this song could have caused immense distress, but watching Adele perform it that night at the BRITs did bring back memories. How many of us I wonder have split up with a significant other because they say they never want to get married, only to find that they do exactly that a couple of years later with someone else? I used to think, bitterly, that it wasn’t that they didn’t want to get married, it was just that they didn’t want to marry me. As I’ve matured I’ve realised that it’s rarely that simple, it’s just that the  timing was wrong. I have a pretty big hunch that had I met my husband ten years earlier we would not be married today. Fortunately for us, when we did meet, the timing was just right!

I heard that you’re settled down
That you found a girl and you’re married now.
I heard that your dreams came true.
Guess she gave you things I didn’t give to you.

Old friend, why are you so shy?
Ain’t like you to hold back or hide from the light.

I hate to turn up out of the blue uninvited
But I couldn’t stay away, I couldn’t fight it.
I had hoped you’d see my face and that you’d be reminded
That for me it isn’t over.

Nothing compares
No worries or cares
Regrets and mistakes
They are memories made.
Who would have known how bittersweet this would taste?