I imagine I’m not alone in finding that we’re living in a bit of a golden age for television drama – What with streaming and on-demand services, as well as the mainstream channels, the discerning viewer is rarely stuck for something great to watch. I am noticing however that cinema audiences are down (around here anyway), and both our local venues have recently slashed their prices. Good news for those of us who still like the excitement of watching our films on the big screen but probably not good for the art form long-term.

This last year alone we have watched Peaky Blinders, Carnival Row, The Boys, Catch-22, Keeping Faith, Summer of Rockets, Years and Years, Killing Eve, Black Mirror, Chernobyl, Gentleman Jack and Les Misérables to name but a few. Seems like all I do is watch telly, but no, our habit is to finish up whatever we’re doing by 9pm, after which we reconvene in the “living room” (the least-used room in the house nowadays, so no longer a very apt name) and settle down for our nightly fix of the goggle-box, as it used to be called.

This week we seemed to be all caught up with everything that had been recorded and nothing new to tickle our fancy on Netflix or elsewhere, so we decided to revisit a series we have already watched, Sons of Anarchy, which follows the lives of a close-knit, outlaw motorcycle club (SAMCRO), operating in a fictional town in Northern California. I’ve written about it around here before, as I became really fond of the theme song This Life performed by Curtis Stigers and the Forest Rangers. As I said last time, probably like most fans, I live in law-abiding “nice-world” where the worst crime I ever commit is to park illegally, or perhaps accidentally speed in a built-up area. Our modern day lives are so controlled and safe that it is sometimes necessary to experience something a bit more edgy from the other side of the tracks, albeit from the comfort of our sofas.

In the penultimate episode of Season 1, a particularly poignant scene was accompanied by a fine version of the song Forever Young written by Bob Dylan, and I was immediately smitten by it. The singer this time was American Audra Mae, who it seems is a great-niece of Judy Garland which might explain the fine pipes. Here is the non-acapella version of the song, but in the show the alternative version was used.

Forever Young was originally recorded by Bob Dylan with The Band in November 1973 and first appeared on his album Planet Waves. Dylan had four children between 1966-1969, including his youngest Jakob, and the song was intended as an uplifting message from a parent to a child. The song has endured as one of Dylan’s classics.

As for the show Sons of Anarchy, it took me quite some time to realise that the lead character, played by Charlie Hunnam, was a graduate of British kids telly, first finding his feet on the BBC show Byker Grove along with fellow Geordies Ant & Dec! He next popped up on the award-winning Queer as Folk along with the now seemingly omnipresent Aiden Gillen. Perhaps to those across the pond his accent still has a tinge of Geordie, but he seems to have made the leap from Byker to biker very successfully. I am convinced, and as the anti-hero of the show I have become quite smitten with him, as well as the song featured above.

As Nathan in Queer as Folk

So, “What’s It All About?” – Having so much great telly around at the moment, means that whenever we want to side-step the real world for a time it’s right there at our fingertips, and with so many great soundtracks, always something for the discerning music-lover as well.

After writing about music from both film and television crime dramas in my last post it got me thinking about some other outstanding theme songs. The Sopranos was first aired in 1999 and followed the life of one, Tony Soprano, the head of a New Jersey, Italian-American, crime family. This was a mafia show unlike any other in that it not only depicted the (seemingly very realistic) goings-on of his cosa nostra family but also centred around his home life and the relationships he had with his wife, children, mother, sister and therapist – A normal family guy you warmed to and identified with in some scenes but then were reminded in no uncertain terms in other scenes that no, this guy and his colleagues had to be sociopaths. It was a brilliantly written series with excellent acting and direction and very deservedly won many awards during its 7-year run. 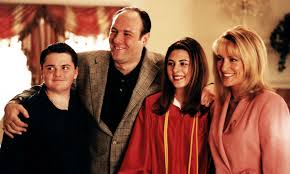 I think it was first shown on British television around the time we moved to our current house, and from the first episode I was hooked. It was however an HBO show which “from the beginning and throughout” covered scenes of a sexual nature, violence, drug-taking and bad language (the first time I ever heard the “c” word uttered on television). It was my favourite show of the week, but it had to be aired after 11pm at night. With ad breaks it went on until around 12.15am – Not great for a work and school night but I just had to watch it. Before it came on I made sure I was all prepared for the next day, in pyjamas, teeth brushed and ready for bed as soon as it finished – A guilty pleasure but not exactly sleep-inducing.

I think there is an element of voyeurism in the watching of such shows. Like probably most of the people who were fans, I live in law-abiding, “nice-world” where the worst crime I have ever committed is parking illegally or accidentally speeding in a built-up area. To witness the lives of these characters is to open a window onto a world you would never experience in real life. Our modern day lives are so controlled and safe that it is sometimes necessary to experience something a bit more edgy from the other side of the tracks, albeit from the safety of our living rooms. 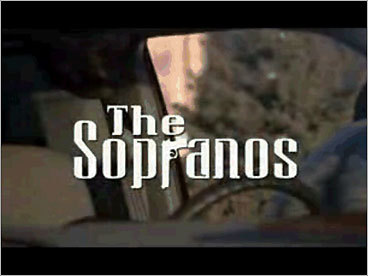 But back to the reason for this post, the opening sequence featured the journey made by Tony from New York back to his home in suburban New Jersey. He is seen emerging from the Lincoln Tunnel and passes through the tollbooth for the New Jersey Turnpike. Numerous landmarks are shown passing by as Tony drives down the highway. The theme played during this sequence was the excellent Woke Up This Morning written by, and performed by, British band Alabama 3. It took me some time to work out that this band was indeed from London as they sounded so American, but that would have been because the music they made at that time fused country, blues, rock and acid house. An unusual mix but as mentioned last time when I wrote about the opening sequence to Pulp Fiction, the audience were left in no doubt as to what kind of show they were about to watch.

Woke Up This Morning by Alabama 3:

Yet another crime drama that we’ve just finished watching is Sons of Anarchy about the life and times of a gun-running motor-cycle club based in Northern California. It took nine months to get through all seven seasons and at one point the graphic violence became so relentless that I had to take a sabbatical from watching it. Again though, it was a window onto a world I had no idea existed and there were parallels to the mafia-based show I had watched ten years earlier, it was just that this time the protagonists were West Coast rather than East Coast based, dressed in biker kuttes rather than sharp suits and preferred Harleys to expensive SUVs. Also, like with The Sopranos, you warmed to the main characters as they exhibited strong emotional bonds to their families, and to each other, but in nearly episode there was a very violent reality check reminding you that they were in essence outlaws and criminals. The scenery, clothing and shoot-outs made you think of the old Wild West – They were just substituting Harleys for horses.

But yet again I digress – The opening sequence to Sons of Anarchy, like The Sopranos, featured a great theme song called This Life performed by Curtis Stigers and the Forest Rangers. It is probably not the kind of song I would have taken much heed of had I heard it on the radio, but after listening to it 92 times as I must have done watching the show, you form an attachment, as you form an attachment to the characters.

So, another post about music from award-winning crime dramas. Time to move on I think to another topic for next time, back in “nice-world”. Will ponder on what it will be over the next few days but yet again I am realising that the “tracks of my years” in later life are often associated with films and television. We now binge-watch boxsets which means you form a close relationship with the characters in favourite dramas. Yes it is make-belief but so was the relationship you had with your teen-idols back in the day. It does sound a bit wrong I know, but there are times when the cavewoman in me must come out and I wish I had a Tony Soprano or a Jax Teller there to fight my corner. I used to fantasise about trips to the cinema with Donny Osmond, now I fantasise about having one of the Sons of Anarchy as a minder when I’m feeling harassed – I would get all the best parking spaces and be able to jump queues. But no, although I don’t exactly live in Stepford, that just can’t happen, but nice to dream……and listen to all that great music!

Woke Up This Morning Lyrics
(Song by Jake Black/Rob Spragg)

You woke up this morning
Got yourself a gun,
Mama always said you’d be
The Chosen One.

She said: You’re one in a million
You’ve got to burn to shine,
But you were born under a bad sign
With a blue moon in your eyes

But you’re looking good, baby
I believe you’re feeling fine,(shame about it)
Born under a bad sign
With a blue moon in your eyes

You woke up this morning
The world turned upside down
Lord above, thing’s ain’t been the same
Since the blues walked into town

When you woke up this morning everything was gone
By half past ten your head was going ding-dong
Ringing like a bell from your head down to your toes
Like a voice trying to tell you there’s something you should know
Last night you were flying but today you’re so low
Ain’t it times like these that make you wonder if
You’ll ever know the meaning of things as they appear to the others;
Wives, mothers, fathers, sisters and brothers
Don’t you wish you didn’t function, don’t you wish you
Didn’t think beyond the next paycheck and the next little drink?
Well you do so make up your mind to go on, cos
When you woke up this morning everything you had was gone