Writing yesterday about the wonderful song I Only Have Eyes For You, got me thinking about Art Garfunkel who also had a big hit with that song in the 1970s. His most successful period however was the 1960s, when he and high school friend Paul Simon formed a duo. They first started recording music as teenagers but got back together in their early twenties to record their first album which featured a simple, pared-down, folk version of The Sound of Silence. Sadly the album was not a great success and the pair went their separate ways. Fortunately for us however, the song’s producer revisited it in the wake of increased airplay, remixed it and transformed it into the kind of folk rock record that was being produced by the Byrds and Bob Dylan at the time. By 1966 The Sound of Silence had become an international hit and needless to say Art Garfunkel headed back from college, and Paul Simon from working in England, in order to capitalise on the renewed interest in their music.

The Sound of Silence by Simon & Garfunkel:

I don’t think I really would have remembered them from that era as I was too young but in 1967 the film The Graduate was released and rather than use a specially written soundtrack, the director chose to use Simon & Garfunkel songs such as “The Sound of Silence”,” Mrs Robinson” and “Scarborough Fair”. The film was a massive success and unlike other film songs I have written about, these are carefully woven into the storyline to great effect, adding another dimension to an already compelling screenplay. Benjamin Braddock has returned home to Pasadena, California after graduating from college. Unsure of what he wants to do with his life, he spends his days lounging in the swimming pool of his parents’ very luxurious home. Enter Mrs Robinson, the wife of one of his father’s colleagues who is similarly bored and and disillusioned with life. Of course the inevitable happens and the affair she draws the inexperienced and clumsy Benjamin into, leads to moments of great two-handed dialogue.

Benjamin: For god’s sake, Mrs. Robinson. Here we are. You got me into your house. You give me a drink. You… put on music. Now you start opening up your personal life to me and tell me your husband won’t be home for hours.
Mrs. Robinson: So?
Benjamin: Mrs. Robinson, you’re trying to seduce me.
Mrs. Robinson: [laughs] Huh?
Benjamin: Aren’t you? 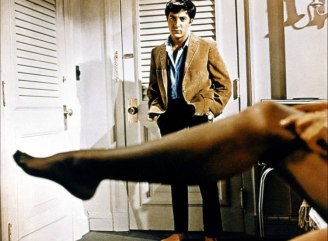 I really only appreciated the music of Simon & Garfunkel properly after watching the film in the ’70s when it first appeared on television. (Was I too young for it I now wonder? – Doubt it as adult themes but never anything too disturbing.) I don’t think any other film made such good use of its soundtrack, until Saturday Night Fever came along in 1978 featuring the music of The Bee Gees. 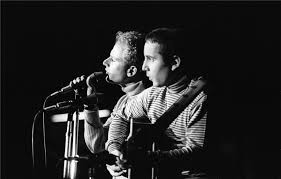 So, ‘What’s It All About’ – Yet again I am writing about music from film or television. The soundtrack to my life has most definitely been heavily influenced by what I used to watch on screen. As a teenager I had a Saturday job in our village newsagents. In my lunch hour I used to go to our local electrical retailer (otherwise known as ‘The TV Shop’) which had a small rack of vinyl albums up near the back. Nothing there had been anywhere near a chart but there were lots of Greatest Hits (Simon & Garfunkel), Easy Listening (Burt Bacharach) and Film Soundtrack albums (The Graduate, West Side Story etc). All my welfare needs were already catered for by my parents, so the Saturday job wages were used to buy vinyl from this shop.

Walking back to the newsagents one Saturday ahead of the afternoon shift with a carrier bag obviously containing an album (they were a very distinctive shape), I bumped into a friend. She immediately asked what I had just bought – ‘G-Gary Glitter’ I quickly replied, embarrassed to admit it was actually a Glenn Miller album as I’d fallen in love with his music watching The Glenn Miller Story with my dad the previous Sunday. Funny how the passage of time has rendered that answer wrong on so many levels – I am proud however to say that I was never, ever again embarrassed to admit that I loved Mr Miller and his unique ‘sound’.

The Sound of Silence Lyrics
(Song by Paul Simon)

Hello darkness, my old friend,
I’ve come to talk with you again,
Because a vision softly creeping,
Left its seeds while I was sleeping,
And the vision that was planted in my brain
Still remains
Within the sound of silence.

In restless dreams I walked alone
Narrow streets of cobblestone,
‘Neath the halo of a street lamp,
I turned my collar to the cold and damp
When my eyes were stabbed by the flash of a neon light
That split the night
And touched the sound of silence.

And in the naked light I saw
Ten thousand people, maybe more.
People talking without speaking,
People hearing without listening,
People writing songs that voices never share
And no one dared
Disturb the sound of silence.

“Fools,” said I, “You do not know.
Silence like a cancer grows.
Hear my words that I might teach you.
Take my arms that I might reach you.”
But my words like silent raindrops fell
And echoed in the wells of silence

And the people bowed and prayed
To the neon god they made.
And the sign flashed out its warning
In the words that it was forming.
And the sign said, “The words of the prophets are written on the subway walls
And tenement halls
And whispered in the sounds of silence.”

I feel I can’t finish today’s post without mentioning the sad passing of Sir Terry Wogan – I can’t remember a time when he hasn’t been part of our television and radio lives, bringing joy to so many people. It’s akin to losing a favourite uncle (or great-uncle depending on your age). It is appropriate to therefore note, that the guest who caused him most difficulty during his long run of early evening chat shows, was indeed ‘Mrs Robinson’ herself, Anne Bancroft – She apparently sat in a catatonic trance and refused to answer any of his questions.

6 thoughts on “Simon & Garfunkel, ‘The Sound of Silence’ and Mrs Robinson”