Short post today as it’s Easter Weekend and I’m off to roll my egg!

Tried to think of a song to write about that relates to Easter but could only think of Easter Parade from the 1948 film of the same name which cannot really be considered a Track From “My” Years (I’m not quite that old) and not really a pop song but one from the golden age of MGM musicals.

When you do think of other songs that have religious connotations (from Life of Brian, Jesus Christ Superstar) there is the capacity to cause offence and that’s not what this blog is about. So, back to letting the old brainbox come up with something randomly and that turned out to be MacArthur Park – Not entirely sure how that happened but I think it’s because there is a park involved and at this time of year, in Scotland anyway, the parks are all waking up from their winter sleep and are full of crocuses and daffodils. Easter is a time of rebirth and eggs are a symbol of fertility. Also, the bizarre line in MacArthur Park about the cake being left out in the rain probably made me think of Simnel cake, traditional at this time of the year.

The song MacArthur Park, written and composed by Jimmy Webb, was first recorded by Richard Harris in 1968 but my favourite version was the one by Donna Summer from 1978. She was the undisputed Queen of Disco in the ’70s and 1978 was the year I reached the age of 18 and could legitimately go dancing in the licenced venues where I lived (although in those days this was not heavily policed and pretty much everyone over 16 was allowed in). This was rural Scotland however and we certainly didn’t have anything resembling Studio 54 but the local hoteliers manned up and kitted their function suites out with glitter balls, flashing lights and if you were very lucky, those flashing tiled floors as seen in Saturday Night Fever. The DJs were often local teenagers who’d had the foresight (or parents with foresight) to invest in the equipment and records needed to hire out their services – A nice little sideline before returning to school on the Monday.

I have always liked this song although its flowery lyrics are definitely not for everyone and it was not until looking into it a bit more for this post, that I came to understand that the whole “cake left out in the rain” line was a metaphor for lost love and the end of a relationship. Nearly 40 years on and it now makes sense although back in the day a most unusual song to have been given the full-blown disco treatment.

As for Donna Summer, it was when she happened to be in Germany performing in the musical “Hair” that she had a fortuitous meeting with the producer Giorgio Moroder. Yet again we have a chance encounter that went on to have great significance, this time for the future of electronic dance music or “Disco”. Listening to the record again, I love hearing that disco beat and if you were a keen dancer like me, not afraid to clear the floor with a few special moves (think Joan Travolta in footless tights and a shiney wrap dress) the late ’70s were a bit of a golden age! As for the lyrics of the song, although I now understand them a bit more, I do think the whole cake metaphor was taken just that little bit too far. 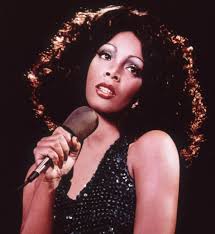 Poor Donna died quite young at the age of 63 in 2012 but she has left a great legacy, as the defining female voice of the disco era, and also because of her influence on the dance music that was to follow by artists such as Madonna and Beyoncé. Thank you Donna for many happy memories on the dance-floor.

MacArthur’s Park is melting in the dark
All the sweet, green icing flowing down
Someone left the cake out in the rain
I don’t think that I can take it
’cause it took so long to bake it
And I’ll never have that recipe again
Oh, no