When is a song not a song? Why of course when it’s one of those pad a dap a dapadda, doob be doobee doop, pum… pum… pum… padadappada “a cappella-type” numbers performed by vocal harmony groups. I read a review this week for the 1969 film Butch Cassidy and the Sundance Kid and immediately had those scenes in my head where Butch and Sundance are being chased down by the posse, led by white-hatted Lefors (“Who are those guys?”). It becomes clear they have to flee, and so they head to Bolivia with Sundance’s schoolteacher lover, in search of a more successful criminal career. Throughout the movie we are treated to Burt Bacharach’s amazing soundtrack, and when they hit Bolivia, it is the perfect cue for South American Getaway.

Now I had always thought that this part of the soundtrack was by The Swingle Singers, that a cappella group that seemed to pop up with great regularity on Saturday night telly in the 1970s, but no, South American Getaway was by the Ron Hicklin Singers, a group of Los Angeles-based studio singers. They are most famously known as being the real backing singers behind The Partridge Family recordings but also worked on The Good, the Bad and the Ugly theme, MacArthur Park and Suicide Is Painless (the theme to the film M*A*S*H). They were the vocal equivalent of (and often worked with) The Wrecking Crew, that bunch of top session musicians who played on many ’60s and ’70s records. They were the house band for Phil Spector but also worked with Sonny & Cher, The Beach Boys, The Mamas & the Papas, Frank Sinatra and even Elvis. Getting back to the Ron Hicklin Singers, Ron himself was lead tenor but there was also an alto, a soprano, a bass and a couple of brothers called Bahler, who performed tenor harmonies on South American Getaway. 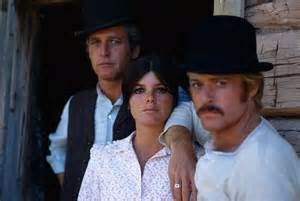 I was too young to have seen Butch Cassidy and the Sundance Kid at the cinema in 1969 so would only have seen it a few years later on television, but what an impact it made. The two lead actors, Paul Newman and Robert Redford had amazing on-screen chemistry and for me, it marked the start of a major crush on both of them. In 1974 Paul Newman starred in The Towering Inferno, one of the many disaster movies around at that time and fortunately I was now old enough to see it at the cinema. The blue-eyed Mr Newman was actually five years older than my dad by that time which seems kind of creepy now but with film stars the whole age thing never seems to matter and even today stars like Brad Pitt and Johnny Depp, who are positively middle-aged, are adored by legions of young female fans around the world.

Around this time it was deemed that my childhood bedroom was in need of redecoration and I was given carte blanche on what the new scheme should be. (Bear with me here, there is a reason for this bit of sidestepping.) Down came the ’60s style wallpaper and the posters of Donny Osmond, David Cassidy and Bjorn Borg and up went woodchip wallpaper, which could be painted any colour I wanted. After pouring over paint charts for some time I went for an attractive mustard colour which would, I thought, look good with my new brown and orange curtains – Of course paint charts can be notoriously misleading and once my dad had finished the room it was most definitely a khaki green colour as opposed to mustard but hey, I was happy, it being so modern with the woodchip an’ all.

One of the house rules for this newly decorated bedroom was that there were to be fewer posters and certainly none attached with drawing pins – Instead I could use that new-fangled stuff called blu-tack. And so it came to pass that a giant poster of Paul Newman was purchased and a slightly smaller one of Robert Redford to feature on the newly painted khaki green walls – I honestly think they remained there until I left home about four years later so I obviously stayed true to this pair for a sizeable chunk of my teenage years.

Because I usually end a post with lyrics, which is not really possible with South American Getaway, I will also include a clip of the most familiar piece of music from that film’s soundtrack, Raindrops Keep Fallin’ On My Head. Again this was a Bacharach composition and I always knew that the person singing it in the film was BJ Thomas but of course in the UK at the start of 1970, it was that dashing Frenchman Sacha Distel who got to No. 10 in the singles chart with the song.

Raindrops Keep Fallin’ On My Head by BJ Thomas:

It’s a bizarre kind of song to have inserted into a film about “The Wild West” but somehow it just works. This was a film all about the relationship between Butch, Sundance and Katharine Ross’s character Etta Place. Despite the desperately sad ending, there were just so many comedic moments and this scene on the bicycle kind of sums it up for me. Over the years I have tried to put together the recipe for a “perfect day” and a lot of the ingedients are contained within the video for this song:

Not for everyone I know but works for me and watching this scene from the film again, I just love how Butch and Etta have that easy relaxed friendship, riding around in dappled sunlight, picking apples from the tree. Very late ’60s indeed and oh to have been Miss Ross on that very special day – Stepford was still many years in the future so for the time-being, until the going got a bit tough down Bolivia-way, she could enjoy being part of one of the most famous trios in film history.

But there’s one thing I know
The blues they send to meet me
Won’t defeat me, it won’t be long
Till happiness
Steps up to greet me

Raindrops keep falling on my head
But that doesn’t mean my eyes
Will soon be turning red
Crying’s not for me ’cause,
I’m never gonna stop the rain
By complaining,
Because I’m free
Nothing’s worrying me

Raindrops keep falling on my head
But that doesn’t mean my eyes
Will soon be turning red
Crying’s not for me cause,
I’m never gonna stop the rain
By complaining,
Because I’m free, ’cause nothing’s worrying me