During my recent hiatus when I took a fortnight off to catch up with other things, a long list developed of all the stories/songs I thought would make for a good post when I got back to business as usual. Since last Sunday, when I took to a bit of “tipsy blogging” (it’s a thing), I have published four new posts so I think I’m back into my groove again. Time therefore to refer to this long list, and the first item noted is: Punk, Dance Competitions and Bubble Bath. Hmm…  cryptic indeed.

Now whenever I touch on new wave, punk or ska, I see a marked spike in the number of views I get but I realise most of these people will have stumbled upon this place by accident and might be sorely disappointed when they find my twee little ramblings. If you are one of those people please don’t be deterred – My thinking is that anyone who lived through the punk explosion of the late ’70s will, at best, be middle-aged now and any stories of those days have a nostalgia factor, and are part of social history.

A couple of months ago I wrote about how the mainstream musical landscape of Britain changed in the autumn of 1977 (Punk, Late ’70s Fashion and The Wrong Trousers). Tony Parsons wrote a great book about those times called Stories We Could Tell but also associated with this change was the shape of our trousers! I’m sorry to keep coming back to stories about trousers (I have another waiting in the wings about leather trousers as it happens) but I cannot emphasise enough how important it was in those days to look the part. We’d already had the infamous television interview with the Sex Pistols where Bill Grundy foolishly goaded them into uttering those childish profanities – The upshot however was that Bill lost his job and single-handedly elevated punk rock into the mainstream. Mr Rotten on the other hand is still making lots of money starring in adverts for butter, so who ended up looking silliest in the end (ok so it’s still Johnny but he apparently does them to finance PiL tours so fair do’s)?

But back to the autumn of 1977. Although punk had been around for a while by then, the music played on most radio stations still tended to be a mixture of soft rock, soul and disco. When we went back to school however to start 6th Year, things were definitely a-changin’. I had completed those important life-changing exams needed to get into University so 6th Year was going to be a bit of a blast to be honest where we took a few subjects for “interest”, did good works for the community and represented the school at various events. Best of all however was that we had our own common room where for the first time, boys and girls hung out together between classes. We were practically adults by this time so instead of the silliness that goes on between the sexes in the lower years (the more insults a boy throws your way the more he likes you etc), we all got on really well and needless to say quite a few romances were kindled, some of which have even stood the test of time. My romance did not stand the test of time, but no matter, life was good and instead of hanging out with our girlfriends we spent all our time with our new boyfriends, who only of course wanted to listen to punk rock. By default therefore, so did we! 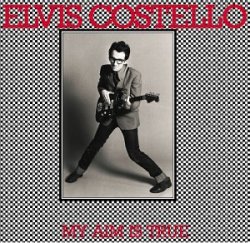 This very spartan 6th Year common room (complete with an urn for coffee-making no less) was the centre of our universe and when a record player was taken in, a lot of vinyl-swapping went on. (Yes it was the 1970s but we weren’t married yet so it wasn’t wife-swapping.) One of the albums of choice was Elvis Costello‘s “My Aim Is True” and of course one of the songs on it was (still is) called Alison so very apt for my good self – Indeed life just couldn’t get any better. My best friend at the time was a girl called Sheena and lo and behold we also had The Ramones with Sheena Is A Punk Rocker – Anyone who knew Sheena could not in all seriousness have called her a punk rocker, she was Head Girl, but we all loved this music, partly because the boys loved it but also because it was new and exciting.

In the November of that year there was to be a big dance in our local Community Centre for all the kids aged 17 and under. Just like now there were plenty of adults and community leaders who wanted to supervise such an event – Oh that’s right, no-one for over 20 years has even contemplated supervising such a thing. Very sad for the youngsters of today and my daughter must have got fed up of me telling her how much was laid on for us as teenagers, when she had nothing.

Anyway, this dance was going to have the local band play for us – Lets call them Pyramid (because that was their name). I had seen Pyramid play often as they were usually the band of choice for such events and did a pretty good job of playing cover versions of songs by The Eagles, Ace (remember them), Smokie and so on. We pretty much knew what we were turning up for so the new-fangled straight legged trousers were left at home and the 36 inch flares, wedge-heeled shoes and big-collared, checked shirts were the outfits of choice for that night – A last harrah for them before being relegated to the….. Was going to say charity shop but we didn’t really have them in those days, I think we just wore our clothes until they fell apart. Imagine our surprise therefore after arriving at the venue, to discover that Pyramid had turned into a punk band overnight! Yes, for the next three hours we were treated to the music of The Stranglers, the Sex Pistols, Elvis and his Attractions, Tom Robinson and The Clash. Looking back I think they must have repeated the same songs over and over again but whatever they did, the new boyfriend and I discovered pogoing that night. Certain styles of music make you want to dance in a certain way, and with punk, it definitely made you want to jump up and down. 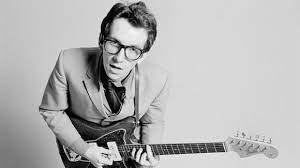 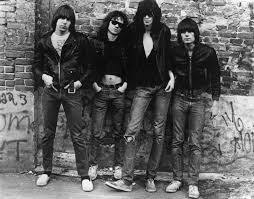 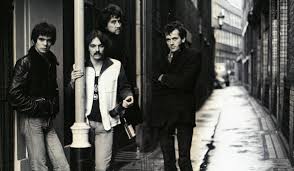 The bizarre thing of course was that we were pogoing in full American country rock uniform, so it was a real anachronism – Also with all that denim flapping about we got really, really hot so after a few hours of jumping up and down, the time came for us to head off for a (non-alcoholic) beverage. We were casually rehydrating when a call went out that we were needed on stage, as we had won the prize for “Best Pogoing”. Now we certainly didn’t know there was any competition going on and we didn’t know there was going to be a prize but the Community Centre management in their wisdom had planned such a thing, and we were the winners.

So, aged 17, dressed in wide flares, the new boyfriend and I headed up onto a stage in a large draughty sports hall in the North of Scotland, to be presented with prizes for “Pogoing”. Pyramid (ex soft rock turned punk rock band) did the honours and what did the prizes turn out to be? A “His & Hers” gift set – Cufflinks and a Pen for him and Bubble Bath and Smellies for her. Even at that age I found this hilarious – The punk attitude obviously hadn’t quite reached our neck of the woods yet.

As for this song, it still gives me goosebumps as I remember those times. A couple of the friends are no longer even with us, so this one’s for them – If there is an internet in heaven, you are not forgotten.

Oh it’s so funny to be seeing you after so long, girl.
And with the way you look I understand
that you are not impressed.
But I heard you let that little friend of mine
take off your party dress.
I’m not going to get too sentimental
like those other sticky valentines,
’cause I don’t know if you’ve been loving somebody.
I only know it isn’t mine.
Alison, I know this world is killing you.
Oh, Alison, my aim is true.

Well I see you’ve got a husband now.
Did he leave your pretty fingers lying
in the wedding cake?
You used to hold him right in your hand.
I’ll bet he took all he could take.
Sometimes I wish that I could stop you from talking
when I hear the silly things that you say.
I think somebody better put out the big light,
cause I can’t stand to see you this way.

3 thoughts on “Elvis Costello, “Alison” and Punk Comes To Scotland”