Anyone who visits these pages will know that I am often earworm-afflicted, but thankfully most of these earworms are of the pleasurable variety. Last week it was The First Time Ever I Saw Your Face by Roberta Flack which had popped up on on the car radio on my way home from work. I hadn’t heard it in years and was struck by just how beautiful it was. Such a slow pace to it which contrasted markedly to everything else I had heard during the same journey. It was actually written back in 1957 by Ewan MacColl, the multi-talented British folk singer, songwriter, activist and more importantly, dad to Kirsty, but was subsequently covered by many other artists.

Ewan made no bones about the fact that he didn’t like these cover versions, but despite that, Roberta’s version from 1972 became a major international hit, winning a Grammy Award for Record of the Year. Her rendition, at over five minutes long was much slower than the original which ran to only two and a half minutes but the success of this more sensual version was no doubt because it was used by Clint Eastwood for his 1971 film Play Misty for Me, where he made his directorial debut. Yes, although the song was originally written as a love song for Ewan’s long-distance American lover Peggy Seeger, whom he subsequently married, the Roberta Flack version, once in the hands of Mr Eastwood became a song all about “makin’ love” – All very smooth in the make-believe world of the movie and not at all like in the real world where I’m sure there would have probably been nettle stings, ants and mussed-up hair.

The First Time Ever I Saw Your Face by Roberta Flack:

Play Misty for Me is a really great psychological thriller and one which I do remember watching on television as a teenager, back in the ’70s. Of course in those days families generally only had one television set which resided in what we called The Living Room (although I am aware that depending on your class and geographical location it could have been called something else). We also had no central heating but a very fine looking 2 bar electric fire to keep us cosy during the long winter months. My point is that the whole family sat in the living room watching television together and whenever “scenes of a sexual nature” as they are called nowadays were transmitted, it was a cue for everyone to get very embarrassed. My dad would suddenly pick up his Aberdeen Press and Journal (Scotland’s oldest daily newspaper) to hide behind, and my mum would find something very important to do in the kitchen. I was left red-faced, willing the “scene of a sexual nature” to be over as soon as possible so that we could all get back to the business in hand, which was hoping that the dashing Carmel-by-the-Sea radio jockey Mr Eastwood, would manage to thwart the unwanted attentions of his stalker, Jessica Walter. 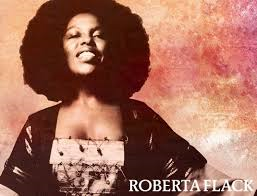 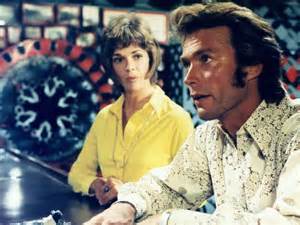 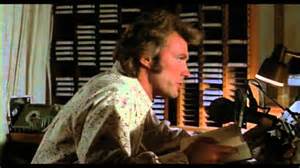 And here is where the law of freaky coincidences strikes again. After purchasing the song at the weekend I decided to write about it on Sunday night. I got side-tracked however by a spot of boxset binging – Mad Men, the final season. Anyone who has watched Mad Men will know that it is an American period drama set primarily in the 1960s at the fictional Sterling Cooper advertising agency on Madison Avenue. We were now right at the end of the final season however and had reached the early 1970s. At the end of each episode they chose a song from the era to accompany the closing credits and what did Sunday night’s turn out to be? Yes, The First Time Ever I Saw Your Face by Roberta Flack!

But of course I can’t leave it there as this would just be too schmaltzy a post. No, instead I will leave you with Will from the Inbetweeners movie, who thought that a spot of Roberta Flack would help him capture the heart of Katie, a girl he had met on holiday – Needless to say it didn’t, and she led him a merry dance on the way to finding that out, but all very funny nonetheless. Until next time, I give you Will…..

The first time ever I saw your face
Your face, your face

8 thoughts on “Roberta Flack, Clint Eastwood and “The First Time Ever I Saw Your Face””