Welcome to this occasional series where I will very embarrassingly, share the contents of my archive box of teenage memorabilia. I always knew these random bits and pieces would come in handy some day, but little did I think back in the 1970s that they would find their way onto such a thing as a “blog” thanks to Sir Tim Berners-Lee and his little invention, the world wide web!

Back in 1978 I used to keep a journal. Here is the extract from Friday, March the 3rd, the day I’d gone in to Aberdeen with the school boyfriend (sbf) to watch Eddie and the Hot Rods at the Capitol Theatre. The Capitol was used as a cinema most of the time but between the mid ’70s and mid ’80s I went to see an awful lot of acts perform there. Eddie and the Hot Rods were the only band on the bill that night who’d had much chart success to date, having got to No. 9 in the UK Singles Chart with Do Anything You Wanna Do in August, 1977. The two support acts were Radio Stars and an unheard of, fledgling band called Squeeze.

Eddie and the Hot Rods 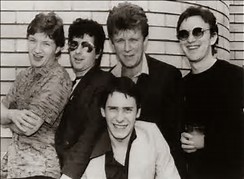 If you can read the extract below you will see that I was a very “proper” and not very “cool” teenager (who also didn’t have brilliant writing skills it seems) but hey, I was wearing my new-fangled straight-legged trousers and was still flushed with the success of having won the prize for “Best Pogoing” at our local Community Centre (documented here) so despite my misgivings about punk concerts, it turned out to be a good night. Interesting also to note that the ticket cost only £2.50 but looking back that was what I earned from my Saturday job, working a whole day in a shop – It’s all relative.

The strange thing is that in later life we seem to develop a selective memory based on subsequent events and I had always thought that the standout act that night was Squeeze – Looking back at my journal entry, the verdict was that “they weren’t bad”. How bizarre as down the line they became one of my favourite bands and Up The Junction is still one of my all-time favourite songs.

Eddie and the Hot Rods were apparently “very good” and we had “no qualms about jumping up and down pogoing”, although it was “an exhausting occupation” (it’s all just so embarrassing). I don’t really think that in the annals of punk, Eddie and the Hot Rods will be remembered as one of that movement’s biggest movers and shakers – They were more of a pub rock band from Canvey Island but I suppose back in 1977, they did fit that whole “new wavey” mould quite well.

It seems that the band I most enjoyed that night were the Radio Stars and looking at the picture of them now, I still remember the showmanship of their lead singer, Andy Ellison. He had bleached blond hair and certainly knew how to work the crowd – I remember how he effortlessly meandered through the audience, niftily navigating his way across the back of the seats in the stalls. Their minor hit record Nervous Wreck also went down well that night and funny how my memories of that night are so at odds with how the respective careers of each of these bands evolved. I don’t know if it’s just me but looking at him now, does he have a hint of the Joe Brown about him?

But I can’t leave it there, for although it seems I didn’t think that much of Squeeze that particular night, they went on to become one of the UK’s best-loved bands. The vast majority of their songs were written by Chris Difford and Glenn Tilbrook, but of course the band Squeeze also spawned one Jools Holland, who seems to have become a bit of a National Treasure and whose annual New Year’s Eve Hootenanny is watched by millions. During the height of their popularity in the late ’70s/early ’80s they had hits with such classics as Cool for Cats, Slap and Tickle, Another Nail in My Heart, Pulling Mussels (from the Shell), Tempted, Labelled with Love, Black Coffee in Bed and Hourglass, as well as the aforementioned Up The Junction.

It was with great joy therefore, whilst watching live footage from Glastonbury this year, that I managed to catch Chris and Glenn pop up as guests in the outdoorsy green room area where Mark Radcliffe and (my other girl crush) Jo Whiley usually reside. They performed a very alternative version of Up The Junction complete with a band of kazoo players – This clip has appeared in my little corner of the blogosphere before but well worth another outing I feel.

Up The Junction (original version) by Squeeze:

So, “What’s It All About?” – Funny how we have a selective memory when it comes to reminiscing about the music of our youth. Just as Fred Astaire’s first audition went badly and notes were made to the effect, “Can’t act, can’t sing, slightly bald, can dance a little”, my diary entry from March ’78 was less than complimentary about Squeeze. Fortunately I soon saw the light and became a big fan down the line – I must have just been far too dazzled on the night by the energetic antics of Joe Brown lookalike Andy Ellison, to really concentrate on the talents of Messrs Difford and Tilbrook. That of course and all the pogoing – “An exhausting occupation”!

Up The Junction Lyrics
(Song by Chris Difford/Glenn Tilbrook)

I never thought it would happen
With me and the girl from Clapham
Out on the windy common
That night I ain’t forgotten
When she dealt out the rations
With some or other passions
I said “you are a lady”
“Perhaps” she said. “I may be”

25 thoughts on “Alyson’s Archive #1 – Eddie and the Hot Rods, Radio Stars and Squeeze”