Things are a bit grim, so we need a bit of a distraction. Welcome back to this occasional series where I share the contents of my archive box of teenage memorabilia. I always knew these random bits and pieces would come in handy some day, but little did I think it would be because 2020 is turning out to be the year when everything changed. Let’s hark back to simpler times.

We’re journeying back to March 1976 when I picked up my monthly copy of Words Magazine. On the cover of that edition were 10cc, and on page 3, we get to hear a little more about our cover stars. 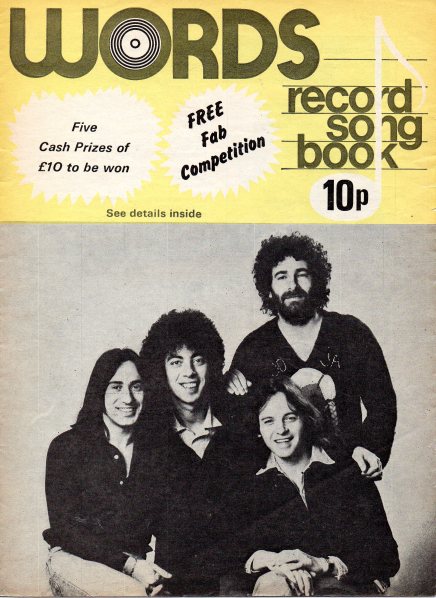 I do sometimes (always?) ramble on a bit around here, but no need for that this time as I recognise some people actually drop by for the tunes. One of my favourite films is Guardians of the Galaxy and it was on telly on Saturday night as a replacement for the rugby which didn’t go ahead. One of the “stars” of that film is the mixtape made for our hero by his mother, full of her favourite songs from the 1970s. The opening scene shows the young Peter listening to his Walkman, and the song playing is I’m Not In Love.

There is a half hour documentary in the BBC iPlayer archives about the making of this one song, so I urge you to seek it out. Written by band members Eric Stewart and Graham Gouldman, it has a really distinctive backing track, composed mostly of the band’s multitracked vocals. Released in May 1975, it became the second of the group’s three number-one singles in the UK and was our smooching song of choice at my local youth club disco. Written mostly by Stewart as a reply to his wife’s declaration that he did not tell her often enough that he loved her (he really did), it was originally played on guitars, but the other two members of the band, Kevin Godley and Lol Creme, disliked the track and it was abandoned. Stewart persuaded the group to give the song another chance and they ending up creating a new version using just voices.

I’m not in love
So don’t forget it
It’s just a silly phase I’m going through
And just because
I call you up
Don’t get me wrong, don’t think you’ve got it made
I’m not in love, no no, it’s because..

I like to see you
But then again
That doesn’t mean you mean that much to me
So if I call you
Don’t make a fuss
Don’t tell your friends about the two of us
I’m not in love, no no, it’s because..

I keep your picture
Upon the wall
It hides a nasty stain that’s lying there
So don’t you ask me
To give it back
I know you know it doesn’t mean that much to me
I’m not in love, no no, it’s because..