I have absolutely no idea how to pitch my blog posts at the moment as in the few days between writing something new, the world has yet again been transformed into a place none of us would have recognised only a couple of weeks ago. I admit to having had a rather large wobble over the last 24 hours (too much social media), but after the massive treat of going to the local supermarket for a basketful of basics, and having just met some of my neighbours (at a distance) for the mass round of applause for the NHS, I think I’ve just swung the other way – What a roller-coaster of emotions. Still haven’t spoken to my mum or had any communication from the care home and DD is at the other end of Scotland with her boyfriend in their one bedroom flat (true test of a relationship), so tough. 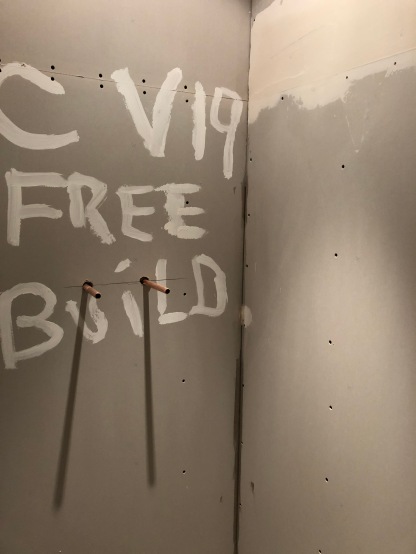 Shower room now on the back burner

Last time I wrote about how I had eventually treated myself to a new shower room after 20 years of making do with the previous owner’s version. Although last week the plumber was confident it was a CV-19 Free Build, by late Monday it was obvious he wouldn’t be able to come back. I paid him in full, as he is one of the many self-employed tradesmen who now have no work. A plan came through to help the self-employed this afternoon but many will fall through the cracks, including ourselves – Not complaining as any help should go to those most in need, but I do worry about a lot of the locals who depend on tourism and the service sector for their livelihoods.

Last time I also shared one of the little films I made at the 2018 Spring Equinox after taking a few classes at the Apple Store. Here is the second one, this time featuring a piece of music by Mark Knopfler, which seemed to suit the particular scenes around here really well. I give you Going Home from the excellent 1983 film Local Hero. Watching it now, I cannot believe how quickly something like going for a leisurely drive has turned into a pipe dream. At the moment, I feel as if I will never take anything for granted again.

Until next time, I hope you and your loved ones stay safe and well.

If you are a frontline worker, we are so grateful for all that you are doing. At times like this it becomes obvious which jobs are worthy and necessary, but sometimes poorly paid, and which are very well paid but not necessarily worthy. The Cult of Celebrity has been seen for what it is and for that I am grateful.

16 thoughts on “A Shower Room Update, Appreciating the Little Things and “Going Home””