Roll Over Beethoven sang Chuck Berry back in 1956. Oh yes, Chuck was firm in his belief that had Beethoven still been around, it would have been time for him to roll over and dig those rhythm and blues. Strangely enough, only 20 years later, Beethoven’s Fifth Symphony became the basis of a disco instrumental and this week it has formed a bit of an earworm.

Like many of us during this strange time of lockdown and post-lockdown easing, we’ve watched a fair amount of telly, and there is no shortage of great telly out there made both by traditional broadcasters and the newer streaming services such as Netflix and Amazon Prime. (I am however starting to notice that the BBC & ITV are running out of new product, and during prime time slots are having to repeat some of their most successful output. This in turn affects the amount advertisers are willing to pay for a slot, which will jeopardise the making of future programmes should the industry ever get started again. At this rate we’re going to be old and grey yet will still be watching Line of Duty, Death In Paradise, The Durrells and Downtown Abbey!)

But I digress. A historical drama I was keen to watch this week was Mrs America (now on the BBC iPlayer) which tells the story of the movement to ratify the Equal Rights Amendment in the 1970s, and the unexpected backlash led by conservative activist Phyllis Schlafly. Prominent feminists of the day, such as Betty Freidan and Gloria Steinem, are key characters, and I feel ashamed that I am only now learning of their contribution to a movement that has given me much of what I have always taken for granted. The opening theme for the show, which has caused the aforementioned earworm, is A Fifth of Beethoven by Walter Murphy. It fits the era and was chosen because it represented both sides of the story. Phyllis and her conservative friends listened to classical music, yet the free and easy disco version of Beethoven’s Fifth, better fitted the feminists.

A Fifth of Beethoven by Walter Murphy:

It of course sounded familiar when I watched the first episode of the show, and it didn’t take long for me to remember that it had appeared on the Saturday Night Fever soundtrack album, and was the record playing when lead character Tony Manero enters the 2001: Odyssey disco in 1977 Brooklyn. He exudes the easy confidence that comes from being a big fish in a little pond, and that nightclub was his domain.

I have written about the film Saturday Night Fever often around here as it came out the year my best friend and I left school. We spent the summer frequenting the many converted function suites in our area, where local hoteliers had decided an investment in floors with flashing lights, glitter balls and a weekly DJ could increase takings no end. It was a memorable summer where we practiced our dance moves and had dalliances with the local Tony Maneros, but looking back I don’t think I appreciated that this carefree summer ahead of starting university, only happened because I came of age in 1978. Had I been born only 10 years earlier such opportunities would not have been a given at all, and our parents may well have steered us down a very different path towards work, then marriage and motherhood. As it turns out we’ve now kind of had to do both, simultaneously, so not sure who won in the end but it’s thankfully no longer a given that men have very little to do with childcare, cooking or housework, so…. , yeah us.

As for Walter Murphy, he was an orchestral leader who studied both classical and jazz music piano at the Manhattan School of Music. In college his interests included rock music that had been adapted from classical music, such as Joy by Apollo 100 and A Lover’s Concerto by The Toys. In 1976, whilst writing a disco song for a commercial, a producer suggested the idea of updating classical music, which nobody had done lately. He recorded a demo tape which included A Fifth of Beethoven and sent it various record labels in New York City. It was picked up and reached the No. 1 spot on the Billboard Chart in October 1976. 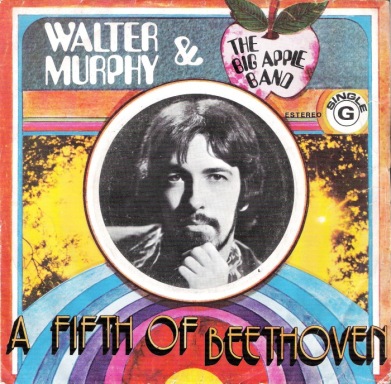 Another little snippet I discovered when doing some research for this post, was that in 2017, exactly 40 years on from the release date of the film that made it famous, the 2001: Odyssey was reimagined. By that time it was no longer a nightspot, but a Chinese restaurant, however a successful businessman invested the cash required to make it happen. The Trammps appeared and sang their hit Disco Inferno, and the actress who played Tony Manero’s love interest also turned up. There were plenty of men in polyester shirts & cream three-piece suits and ladies in those free flowing dresses that epitomised the era, as well as some of the original DJs. Must have been quite a night.

And here is something that really hit home with me this week. In listening to these disco hits of 1978 I’ve been transported back in time, reminiscing about that carefree summer after leaving school. Not so for our school-leavers of this year who have had no prom or end of term revelries and face uncertainly about their exam grades. The doors to the places where they all used to come together are still firmly closed, and as DD pointed out earlier in the week, “Its a rubbish year to be single”.

No lyrics this time as an instrumental, but as ever, if you want to leave a comment, I always reply.

8 thoughts on “Earworm of the Week #5 – Feminism, Walter Murphy and ‘A Fifth of Beethoven’”