Well, we’re now coming up to eight weeks in lockdown here in Scotland with no sign yet of an easing of restrictions. We can now go out more than once a day for exercise, however that has somehow lessened its appeal. When something is rationed you make the absolute most of it, but when it is more freely available, it can be squandered. Don’t want to return to my old ways now that I’m feeling so much fitter than I have in years though, so good discipline will have to kick in instead. There is definitely a change in visible activity now with more traffic on the roads and more shops and services finding ways to re-open, but the days of welcoming millions of tourists over the summer months are still a very long way off.

Not many people around here will probably be aware of this, but it should be Eurovision week, culminating with the grand final taking place on Saturday 16th May. The contest this year was to be held in Rotterdam as Duncan Laurence (real name Duncan de Moor) from The Netherlands won last year with his song Arcade, and it is usual for the previous year’s winning country to host the next one.

Sadly the auditorium in Rotterdam is now an overspill hospital for Dutch Covid-19 patients and this will be the first year since the contest’s inception 64 years ago that it hasn’t gone ahead. 2020 will be the year that never happened for large events where the whole raison d’être is the gathering together of lots and lots of people, all there to enjoy the same thing – The Olympics, the Euros, Glastonbury, Chelsea Flower Show, Wimbledon, the list goes on….

I have been brave enough to mention around here before that a few years ago we went to an actual live contest in Vienna. I’m not going to lie, it was great fun, and although definitely not the “coolest” thing ever to have done, we had a great weekend and found some like-minded fellow Scots to hang around with. If you’re looking for a bit of fluff and nonsense, it can’t be bettered.

Some of my first memories are of watching the contest with my family as a child when our most popular singing stars represented the nation and invariably won or came close to winning – One of my first posts was even about those days (link here). The contest we went to was nothing like the shows I watched as a child, and we of course no longer field the cream of our crop (as it could be career suicide for them), but there have been some worthy and memorable winners over the last few years, Salvador Sobral for one.

This Eurovision themed post comes just at the right time, as I have been manfully making my way through the UK Singles Chart of 1970 in the course of the year as a kind of 50 year retrospective, reflecting simpler times (got that right!). So far we have revisited the hits of Kenny Rogers, Edison Lighthouse, Lee Marvin and Simon & Garfunkel but then the 1970 Eurovision took place and the charts became littered with songs from participating nations as was wont to happen back then.

The song that took over the top spot in the UK Singles Chart from Bridge Over Troubled Water was All Kinds of Everything by very young Irish songstress Dana (the only Eurovision finalist to go on to became an MEP). I would only have been aged nine when this song won the contest and wouldn’t have found it nearly as unbearable to listen to as I do now, but, those sugary sweet songs were just the kind of thing that won back then. In time we would have hard rock winners but that would take a while yet.

The song representing the UK in 1970 was Knock, Knock Who’s There? performed by Welsh songstress Mary Hopkin. She had been the favourite to win on the night but ended up coming second. Most of us in the UK already knew Mary well as she had been one of the first artists to sign with Apple Records, owned by the Beatles. The model Twiggy had apparently seen her winning the British television talent show Opportunity Knocks, and recommended her to Paul McCartney. Her debut single Those Were The Days, produced by McCartney, reached the top spot in the UK in 1968 and yes Mary, the way I’m feeling right now, those definitely were the days.

Lots of Eurovision songs mentioned in this post but what else do I find in that same Singles Chart? Here’s one I haven’t heard in an awful long time but again, it brings back happy memories of watching TOTP with my family as a child. The Same Old Feeling was recorded by the band Pickettywitch and reached the No. 5 spot in 1970. I can still remember watching lead singer Polly Brown in her very short dress, although her immaculately coiffed singing sidekick draws a blank. The band apparently got their moniker after passing a pub of the same name in Yeovil in Somerset. Compared with the wholesome Eurovision ladies, Polly definitely had a bit of an edge.

The Same Old Feeling by Pickettywitch:

Bit of a rambling post this one but a bit sad that we won’t be having our usual get-together for Eurovision this year complete with food and drink of the host nation. As it turns out, Dutch food is not especially noteworthy, so might have been quite a tough one anyway. I did get a chance to revisit the chart of 50 years ago again though, and decided in the end I preferred Pickettywitch to any of the Eurovision entrants. It looks as if the next big chart topper of 1970 was also associated with a major event, but a football one this time. By the time I get round to it, I will have coincided with another cancelled 2020 event. 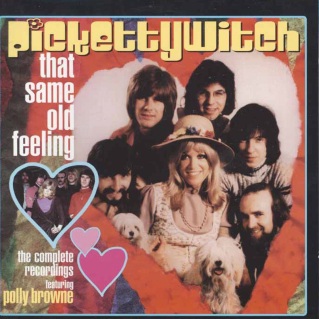