Well, what a difference a week makes. Last Saturday marked the publication of my 300th post and it has become a habit for me to write something to mark the achievement of reaching that nice round number (Post 101 and Post 201), but understandably not finding much inspiration. I am still amazed I bounced back in February after a month’s hiatus as I had found myself writing negative, self-pitying posts for quite some time which just weren’t particularly entertaining, but I did, and I’ve been quite enjoying revisiting the tracks of my years of late.

But here we are, and although I desperately want to avoid any talk of coronavirus around here this is my web diary as well as a music blog, so it really can’t be avoided. I am reminded of a conversation I had with a girl at work many years ago – It was about how we both spent an inordinate amount of time worrying about restructurings at work, issues with our kids, house prices and the rest, whereas in reality the really worrying things will come out of nowhere, and we’ll be blind-sided on a Tuesday afternoon. The following Tuesday afternoon, after a visit to her GP, she was diagnosed as having cancer. Fortunately it was caught early and after treatment she made a return to full health but it made me realise we really shouldn’t sweat the small stuff.

But, old habits die hard, and over the last couple of years I have been sweating the small stuff (suddenly the whole Brexit debacle seems like small stuff). I am one of those people however who is a bit rubbish at dealing with minor problems and dilemmas but when something really big comes along I rise to the challenge. The way things are currently playing out, this year is going to be one helluva challenge and I’m not talking about the virus itself (which as the PM has even said himself will lead to loved ones being taken before their time), but the fallout from it.

Mr WIAA and I have a mantra for life which is, “It’s All About The Balance” – It has served us well over the years and it’s only when the balance becomes skewed that we struggle. But that just relates to our family dynamic (and the balance in the last few days has been severely skewed). Applied to the country as a whole it’s not going to be pretty, but there really is no way of avoiding it. This virus is new, there is no vaccine as yet and we’re pretty much all going to have to get it in order to build up immunity (assuming “the science” is correct). I totally get why the government want to delay the banning of large scale gatherings but events seem to have overtaken them and in domino-effect style one large “gathering” after another is being cancelled or postponed by its organising body.

Many small businesses will go to the wall, especially in the hospitality and entertainment sectors (I include football in this one, DD’s other half’s industry). My home town derives a massive amount of its income from tourism and that’s just not going to happen this year (my industry). Dedicated health professionals will be tested to their limits and those who lose their jobs and livelihoods will suffer greatly (doubt if DD’s workplace will weather the storm). The old folk with dementia in care homes (I include my mum in this group) can no longer be visited by their families and they won’t understand why they’ve been abandoned. Should the worst come to the worst, they will be alone.

But again, here we are, and although the experts and scientists tell us to self-isolate if we have symptoms (and not go on cruises !?), many of us in the real world who may well not be paid if we don’t turn up for work will carry on regardless – It’s just human nature as navigating the Universal Credit system for urgent replacement funding would be nigh impossible. Likewise, there is an army of unpaid carers out there who look after their elderly relatives. They have been told to give them a phonecall and tell them they won’t see them for a few weeks! Again, not going to happen. I know from personal experience I had to visit my mum three times a day when she was poorly otherwise she would not have been fed or given her medication.

Last Saturday my first guest of the year to the holiday hideaway left for home, after having spent an excellent week in the area where he and his family were blessed with great weather. He knew about Alyson’s Highland Adventures from my blog and decided to give me a whirl. This Saturday it’s increasingly looking like he might be my first and only guest of 2020. Yes, this year the town is going to look less like the picture on the left and more like the one on the right. 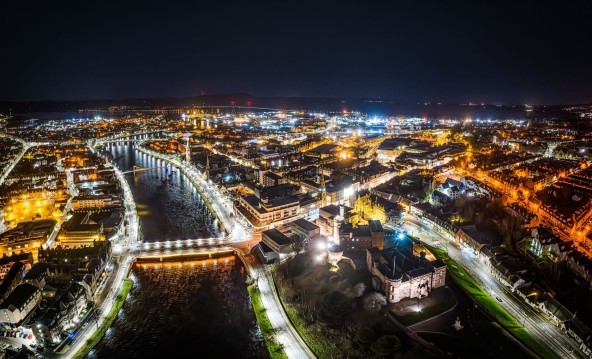 The Town at Night 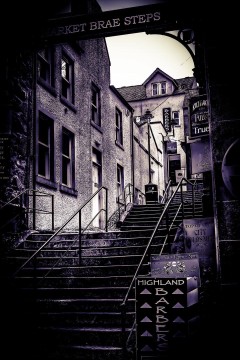 I have just asked Mr WIAA if he had any song suggestions for this post and he came up with It’s The End Of The World As We Know It by REM. Although I think he’s kinda right (in the short-term), that all sounds a bit too dystopian. Instead I’ll include this offering from Bon Iver who are new to me, but the song Blindsided from their 2008 album For Emma, Forever Ago suddenly seems appropriate to how we’ve all been hit this week. The majority of that album was recorded whilst lead singer Justin Vernon spent three months in (self?) isolatation in a cabin in north-western Wisconsin. Most interestingly for me however is that their name comes from the French phrase “bon hiver” (good winter) taken from a greeting heard on the excellent ’90s telly show Northern Exposure. We watched that show religiously but with the passage of time I seem to have forgotten they ever said that.

So, “What’s It All About?” – I seem to have returned with another negative post but I’m just bracing myself for all the changes we’re going to have to get used to over the next few weeks and months. I really want all my loved ones to stay well (and of course all you lovely followers too) but being realistic this thing has to run its course so that we can get to the other side. Strange times indeed.

Back down, down to the downtown
Down to the lockdown…
Boards, nails lie around

‘Cause blinded
I am blindsided

‘Cause blinded
I am blindsided

Lest we stray into negative blogging territory too soon, here is a clip a friend has just sent me. Most of us will remember Nigel Hawthorne’s portrayal of Sir Humphrey Appleby, the Permanent Secretary for the Department of Administrative Affairs in the telly show Yes Minister. Very funny, but also very apt for our times.