Last time I shared a little film of my hometown, which highlighted just how blue the skies were on the first day of Spring. Since then, I have been feeling a bit nostalgic about the band ELO – That of course would be because the music I chose to accompany the film was Mr. Blue Sky, from their 1977 album “Out of the Blue”. The cover for that particular album was very memorable for me, because it was one of the pieces of artwork that graced the walls of the very basic cottage I shared with my best friend the summer after leaving school.

We had headed off to work in a very posh country house hotel and luckily for us accommodation came with the job. It was basic indeed, but we had our first taste of independence, with no parents hovering over us querying our movements – Needless to say that summer we worked hard (being a breakfast waitress plus hotel jack-of-all-trades is a tough gig) but also played hard – Living off the beaten track, we built up a good working relationship with Diamond Doug, our local taxi-driver who seemed to favour wearing a certain style of patterned jumper.

That summer, over the course of a weekend, it was not unusual to: 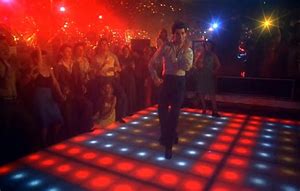 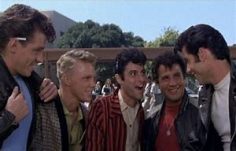 The T-Birds from Grease

Phew, I’m exhausted just writing about that so am amazed that my younger self managed to actually live life at that pace – The energy of youth. But back to the album cover for “Out of the Blue”, my friend Catriona definitely had that one up on her side of our bedroom wall, and I had some of my favourites over on mine. Looking at my album collection now, I can still tell which ones they were as they have those telltale blu tack, or even worse, sellotape marks on the covers. The vinyl itself must have been simply kept in the inner sleeve but was played constantly on the little mono record player I had brought from my parents’ house. It was the predecessor to the massive Toshiba Music Centre that had replaced it only 6 months previously, but I was never going to be allowed to take that with me, so the mono player it had to be.

Although our social life revolved around going dancing, we were both massive music fans and played anything and everything during our time off that summer. BBC Radio 1 woke us up and entertained us during the day but we also loved playing our records, and roped in friends and relatives to bring us new releases from record shops in the city when they came to visit. So, it was not only the soundtrack albums to Saturday Night Fever and Grease along with ELO and The Commodores we listened to that summer, oh no, it was also punk (Blondie, Sham 69), reggae (Bob Marley), pop and soft rock (Marshall Hain, Jackson Browne) and of course the obligatory novelty song (Father Abraham and the Smurfs!).

I still have one of the singles that Catriona’s sister bought on my behalf that summer – They didn’t really have many other hits and were short lived indeed but there was something about The Motors song Airport that I really liked and whenever I hear it now, I always think of that summer at the cottage with our mono record player.

Airport by The Motors:

As for my friend, the single she had requested, and which was duly delivered by her sister was this one by Kate Bush. Yes, The Man with the Child in His Eyes was also a hit that summer but I have just discovered that Kate actually first recorded it in 1975 and had written it three years earlier at the age of 13. To quote the title of another of her songs – Wow!

So, “What’s It All About?” – Funnily enough, when I sat down to write this post it was going to be all about ELO; about how it was actually the brainchild of Roy Wood; about how he soon moved on but left Jeff Lynne and the others to create something really quite amazing fusing modern rock and pop songs with classical instrumentation; about how Jeff’s partner for many years was the wonderful Rosie Vela whose song Magic Smile has been a bit of an earworm this week; but no, as is wont to happen, looking at the artwork for that ELO album cover just brought back so many memories of that wonderful summer.

The awful thing about reminiscing about the happenings of the summer of 1978 is that I can no longer talk about them with Catriona, as she died 16 years ago, leaving behind a husband and two young children. By then we were living on opposite sides of the Atlantic but if we ever got together, it was just like old times. I didn’t realise back then that I would never have such a close friendship with any other female, ever again. There have been many friends in the intervening years and some lovely friends are part of my life now, but how can you ever recreate what you had with the person you were closest to during those formative years, aged 16 to 21.

Before I go, here is a shot taken with my trusty Kodak Instamatic, of the little cottage Catriona and I shared that summer. Happy memories indeed of a very special person, who had her own magic smile. She made the world that little bit better for all of us who knew her and is sadly missed.

So many destination faces going to so many places
Where the weather is much better
And the food is so much cheaper.
Well I help her with her baggage for her baggage is so heavy
I hear the plane is ready by the gateway to take my love away.
And I can’t believe that she really wants to leave me and it’s getting me so,
It’s getting me so.

The plane is on the move,
And the traces of the love we had in places
Are turning in my mind – how I wish I’d been much stronger
For the wheels are turning faster as I hear the winds are blowing
and I know that she is leaving
On the jet plane way down the runaway.
And I can’t believe that she really wants to leave me – and it’s
getting me so,
It’s getting me so.

As luck would have it I found another entry in my 1978 journal where I’ve jotted down a short and snappy review of the the two big movies Catriona and I went to see that summer, one at the beginning and one right at the end. Again, embarrassing to read my words from back then (and my penmanship seems to have deteriorated) but interesting all the same. Yet again I seem to have not been particularly impressed with either of these films at the time, yet they are now two of my favourites movies of all time – The nonchalance of youth!